Remember that recent economic analysis that said Americans were more in debt than they've been in almost a decade?

The bulk of that debt is housing related, but student debt also is a big contributor to the growing owing.

Households today are borrowing differently than they did nine years ago, note New York Times reporters Michael Corkery and Stacy Cowley. The latest data show that student loan debt, driven by soaring tuition costs, makes up 11 percent of total household debt, up from 5 percent in the third quarter of 2008. 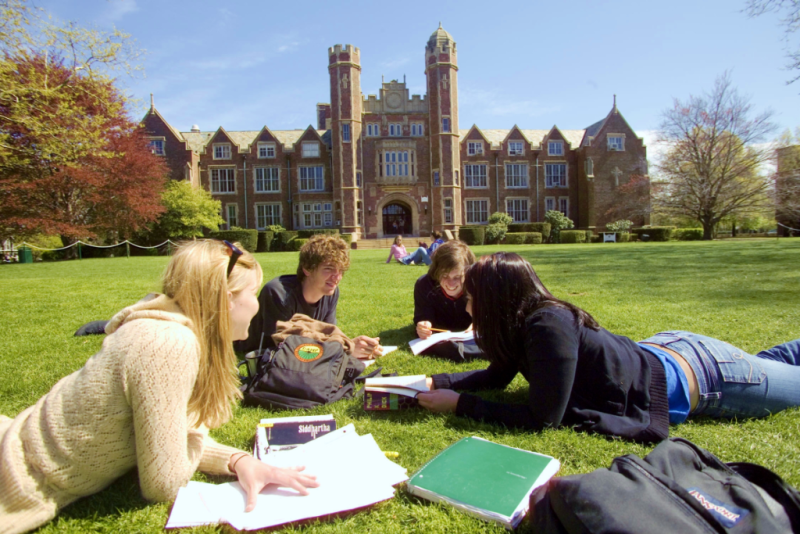 Nice days mean students can turn their college campus into an outdoor study hall. (Photo via On Campus Market/OCM.com blog)

That's why tax legislation has been introduced in both the House and Senate to help those who are drowning in higher education debt. Both chambers seek to expand a tax-free employee benefit that will help graduates pay down their loans.

A welcome workplace perk: That's a benefit that, if recent surveys are correct, would be very welcome by college debt-burdened workers.

A 2016 survey by Student Loan Hero found that when it comes to workplace perks, more employees would choose student loan repayment assistance over

Not surprisingly, younger workers preferred help from their bosses to pay down their college debt. A majority (54 percent) of staffers aged 18 to 24 even said they would rather receive student loan repayment benefits than the option to contribute to a 401(k), which brings about a whole 'nother set of worries for a future blog post.

A few companies apparently have gotten the message. Four percent of employers offered student loan repayment assistance in 2016. While that's a tiny percentage, it's up from 3 percent in 2015, according to a survey last year by the Society of Human Resource Management.

The members of Congress advocating added employer help in repaying student loans believe their bills will increase the number of companies offering such a benefit.

Davis' and Peters' H.R. 795 would allow employers to provide a similar tax-exempt benefit that would go toward paying down an employee's student loan debt. As with the existing workplace educational help option, an employer could put up to $5,250 per year toward the debt an employee incurred for that education.

The enticement for the companies, aside from possibly luring more potential workers? The employer would get a tax break, too.

The Employer Participation in Student Loan Assistance Act has 74 bipartisan cosponsors and is pending in the House Ways and Means Committee,

"Seven in 10 college seniors last year graduated with student loan debt, which now represents the second highest form of consumer debt," Davis said in announcing the bill's introduction. "This debt is a drag on our economy because it prevents many young adults from contributing to our economy."

Many companies already see the attraction and retention payoff for providing such a benefit, Davis noted, but "we want to encourage more to participate so we can help both struggling graduates and our economy."

"Just as allowing employers to offer tax-free tuition assistance has enabled more Americans to advance their education, offering this same incentive for student loan payments will speed up the repayment process so that graduates can begin to make investments such as buying a home, starting a family, or saving for retirement," said Peters, who introduced a similar bill in the last Congressional session.

Warner's motivation for the legislation is mathematically based. More than 60 percent of Virginia's college students will graduate with some student loan debt, and the average student loan debt in Virginia tops $29,000 per graduate, he noted in announcing introduction of the bill, S. 796.

Thune said the bill would "give graduates the flexibility they need to work with employers to secure lower interest rates and pay part of their student loans back tax free. This is an obvious win for graduates, but it also helps businesses attract and retain talented employees."

Warner and Thune introduced similar bills in two prior Congressional sessions. This latest version has four cosponsors, again from all political perspectives, and is pending the Finance Committee.

Could this be the year? Congress obviously has had its eye on helping students pay their college loans for years.

However, since this issue got much attention during the 2016 presidential election, thanks in large part to proposals by Democratic candidates Bernie Sanders and Hillary Clinton, as well as the millions of student loan owing millennials now in the workforce, the legislation might actually move in the 115th Congress.

Are you deep in student debt? Would an employer's help in paying it down affect your decision to take a job?

Thank you for the sharing the great post..actually i was really looking like this information. Very neatly describe the contents.each points are very simple and very understandable.I like your presentation..keep sharing such a good information..once again thank you for the post..good work.