Whew! We dodged the government shutdown bullet. For now.

The House and Senate have agreed on an omnibus spending bill that will keep federal offices open through Sept. 30, the end of fiscal 2017. The House is scheduled to vote on the measure today approved the $1.1 trillion bill in a bipartisan 309-118 vote. A Senate vote is expected before the short-term funding measure that's keeping Uncle Sam operating expires at midnight Friday, May 5. The Senate approved the bill Thursday, May 4, sending it to the president for his signature. 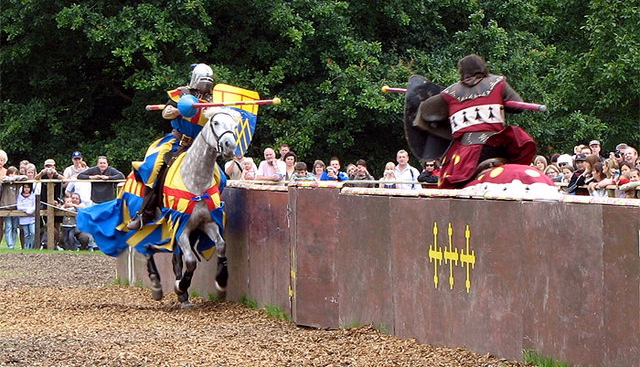 The way Congress reaches consensus often is described as a legislative form of Japanese Kabuki theater. However, maybe Representatives and Senators should take a hint from the 45th president's latest challenge and joust to settle differences. (Photo by of Warwick Castle jousting by Martin Addison, geograph-org-uk-562430 via Wikipedia)

But not everyone is happy. Donald J. Trump has thrown down the gauntlet for the next fiscal year's federal funding fight.

Trump's "good" shutdown: The agreement contains what Congressional Democrats tout as victories for programs they support, but ignores many items <cough, no wall money, cough> championed by the White House.

Many media reports also characterized the GOP as losers in negotiating the spending package.

And we all know how Trump feels about losers.

That no doubt contributed to the pair of social media posts the prez sent around 9 a.m. EDT May 2 threatening a tougher battle in the coming months to keep Uncle Sam's doors open after Oct. 1. Specifically, Trump Tweeted:

The reason for the plan negotiated between the Republicans and Democrats is that we need 60 votes in the Senate which are not there! We either elect more Republican Senators in 2018 or change the rules now to 51%. Our country needs a good "shutdown" in September to fix mess!

Trump's tweets really aren't a surprise. He had seemed primed for a battle last week before backing off at the last minute on his demand that the fiscal funding bill contain money for his primary campaign promise, the "big, beautiful" literal wall on the Mexico-U.S. border.

Now it sounds like he's gearing up to take that fight to the extreme in the next round of appropriations.

Costly closure: The last government shutdown, a 16-day closure in October 2013, cost the country $24 billion, according to an estimate from Standard & Poor's. The financial services company said the shutdown also cut the country's fourth-quarter growth by 0.6 percent.

In fact, many analysts determined that 2013's government shutdown was more expensive than it would have been to simply keep all federal offices open.

And the shutdown also exacted a political price. At the time, one public opinion poll found that cockroaches were more popular than members of Congress.

Some in GOP disagree: Some Republicans, perhaps remembering the beating their reputations took four years ago, have taken issue with their president's idea that another government shutdown would be wise.

Sen. John Cornyn (R-Texas), the second-ranking Senate Republican, said a shutdown would be an "abdication of responsibility, particularly if you're in the majority. Our voters, the people who elected Republican majorities in both houses and elected this president, did not vote for us in order to shut down the government. They voted for us to govern, as hard as it is."

The parameters of the coming budget battle will be set later this month when the administration releases its fiscal 2018 spending proposal. That would give Capitol Hill around four months to cut the next deal after Trump makes his appropriations wishes known.

Don't delay your extended taxes: Who knows? Trump might get more of what he wants this next time. In that case, the prez's current "shutdown" threat would be moot.

But just in case, if you're still working on your extended 2016 tax return, you might want to get it to the Internal Revenue Service well before the Oct. 16 final deadline. That way, you'll know there will be workers there to process it.

These earlier posts — 4 moves to make now if you missed the tax-filing deadline and 10 last-minute tax-filing tips — can help.

No IRS budget cuts … yet: Speaking of the IRS' budget, the fiscal year 2017 budget deal keeps the agency's funding at $11.2 billion. That's the same as last year's level.

"This holds the agency’s budget to below the 2008 level, but provides sufficient resources to perform its core duties," said House Appropriations Committee Chairman Rep. Rodney Frelinghuysen (R-New Jersey) in the committee's summary of the bill.

But Republicans, who blame internal IRS politics for the Tea Party targeting scandal, were able to insert language in the agency's appropriations that would stop a proposed IRS regulations dealing with the political activities of tax-exempt organizations. The GOP has assailed the regulations as an undue burden on tax-exempt organizations' First Amendment rights, as well as being so broad that it would exclude nonpartisan voter engagement.

And Republicans haven't forgotten about the IRS' Star Trek and Gilligan's Island themed videos or conference costs. The fiscal 2017 funding restrictions also prohibit any use of the money for "the production of inappropriate videos and conferences."