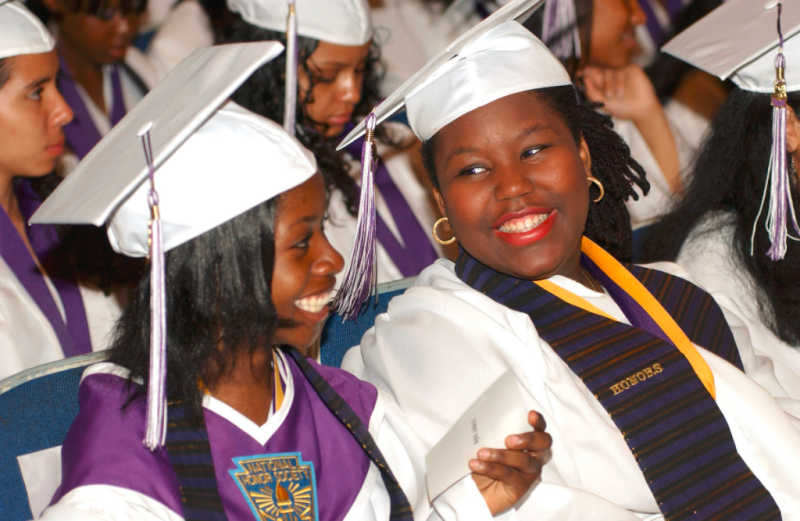 These young women are enjoying their high school graduation ceremony. Now, with diplomas in hand, they and their families are looking at how to pay for college. A 529 plan could help. (Photo courtesy U.S. Department of Education via Flickr)

Happy 529 Day! This end-of-May day is marked each year by a flurry of activity to get the word out about 529 college savings plans.

Created by Congress in 1996, the accounts are officially designated as a "qualified tuition program" in the Internal Revenue Code. However, they are more commonly referred by the IRC section 529 that covers their associated tax benefits.

All 50 states offer some type of 529, into which families can put money for higher education costs.

529 overview: Technically, there are two types of 529 plans that, while authorized by Uncle Sam, are administered by the states.

They are a tuition prepayment plan and a savings (really an investment) plan to which you contribute money to be used later to pay for a student's qualified higher education costs. The tax-favored savings plan option is the more popular choice.

There is no tax deduction at the federal level for these contributions, although Arizona, Kansas, Missouri, Montana and Pennsylvania allow state income tax write-offs for 529 contributions.

However, the money in the 529 grows tax-free at all jurisdictional levels. Withdrawals also aren't taxed when the money is used to pay qualifying college costs.

Sounds like a great savings and tax deal, right? It is, as long as you follow the rules. Below are the key ones:

Student beneficiary choices
A 529 is opened for the benefit of a student, typically a young child many years away from enrollment so the money can grow. However, a 529 can be opened for a student already in college or some other post-high school educational program; it just won't earn as much to cover a lot of costs early in that student's college career. Still, every penny helps when it comes to covering higher education costs.

In fact, you can open a 529 plan benefiting anyone — a relative, a friend or even yourself. And as account custodian, you can change the beneficiary of a plan if the new beneficiary is in the same family.

Few spending limits
While the person who opens the account retains control of it, the designated beneficiary uses the plan money to pay eligible college costs. In most cases, the beneficiary isn't limited to attending schools in the state that sponsors their 529 plan, but be sure to check with the plan you choose about this rule before establishing the account.

Expansive contribution limits
There generally are broad contributions limits. Officially, according to the IRS, 529 plan contributions "cannot exceed the amount necessary to provide for the qualified education expenses of the beneficiary." Still, that's pretty wide latitude for putting money into the account.

From a tax standpoint, just be sure you that your contributions don't exceed that annual gift exclusion amount. This is adjusted annually for inflation; for the 2017 tax year it's $14,000. If you contribute more than that amount to a 529 this year, you could face gift tax consequences. If you're that generous when it comes to your child's or grandchild's 529, check out the IRS gift tax return (Form 709 and its instructions) for more on a special rule that applies to large 529 plan contributions. Also, check with your state about contribution limits. Most do set some.

No earnings limit
While many tax breaks are limited if you make, in the Internal Revenue Service's eyes, make too much money. You don't have to worry about that when contributing to a 529 plan. Regardless of how much you make, you can put money into one of these savings plans.

Age is immaterial
Age also isn't an issue, at least at the federal level. Regardless of how many birthdays have been celebrated, anyone who plans to attend an eligible educational institution can be the beneficiary of a 529 plan. However, a handful of states do impose their own age restrictions, but these typically apply to prepaid college savings plans rather than 529 accounts. Double check with your plan administrator about any possible age restrictions.

Qualifying expenses
Qualified higher education expenses for which 529 money can be used generally include tuition, fees, books, supplies and equipment required for enrollment or attendance at an aforementioned eligible educational institution.

The equipment reference includes any computer and related peripherals, such as a printer, as well as software that' predominantly educational in nature. But sorry, gamers. This doesn't include equipment that's typically and primarily used for amusement or entertainment.

Potential pitfalls: If you do decide to open a 529, be careful to avoid some common plan pitfalls.

As noted in a previous post on how to make the most of a 529 plan, missteps are common.

They include, according to Joseph Hurley, higher-education funding guru and founder of Savingforcollege.com:

Hurley has details on these 529 mistakes and how to avoid them in his 529 withdrawal traps article.

Good for many, but not everyone: OK, after considering the perks and pitfalls, you're convinced. You're setting up a 529 plan for your toddler tomorrow.

For many folks, that's a good idea. But not for all.

Setting up a 529 plan is an investment decision, which means both the benefits and drawbacks must be considered, along with alternative ways of accomplishing the same thing.

Note, too, that 529s are not the only option available for paying for college.

The tax code contains a variety of educational tax breaks.

Look into scholarships and grants as another way to pay for your continuing education.

And in some cases savings bonds can provide a tax-free way to pay for some higher ed costs.

529s favor the wealthy: Another pitfall, at least according to a couple of economics professors, is the tax-break design of the 529 plan itself.

In a recent article for The Conversation, the academic duo explained why they believe 529 plans don't really help low- and middle-income families meet growing college costs.

Scott and Pressman also point out that savings in a 529 count against families when they apply for financial aid.

And when people use the money improperly, spending it on expenses that don't qualify or on non-college costs altogether, they face tax penalties that produce an added financial strain.

These reasons, say the two professors, are part of the reason "why only 0.3 percent of households in the bottom half of the income distribution (under $56,516 in 2015) have 529 accounts, while 16 percent of the top 5 percent do."

Do your 529 homework: Of course, every student and family is unique. You may not make that much money, relatively speaking, and still find a 529 plan is a good move.

Just do your homework, both with regard to 529 rules and the plans that are available. A good study guide is Saving For College's online database of the various state options that can help you compare and select the best 529 plan for your financial and educational needs.