More Americans believe the Trump Administration will hike their taxes rather than cut them, according to a new poll.

The CBS News survey found 38 percent believe the president will raise their taxes, 25 percent believe he will lower them and 33 percent think their tax bills won't change. The tax increase belief was strongest among poll participants who made less than $100,000. 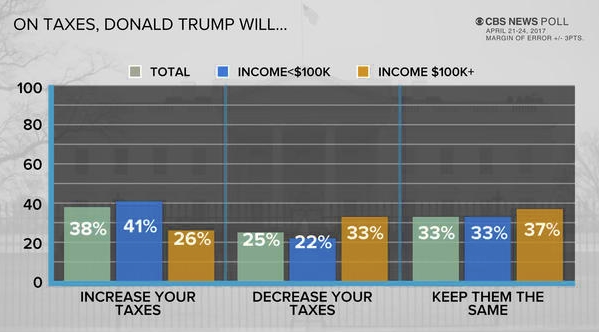 The telephone poll, conducted between April 21-24 by SSRS of Media, Pennsylvania, was released by CBS News on Wednesday, April 26, the same day that the White House revealed its latest tax reform plan.

That tax plan, however, might not do much to change people's minds about Donald J. Trump's tax intentions.

Big ideas, little details: Although Treasury Secretary Steven Mnuchin, who along with National Economic Council director Gary Cohn released the plan, called it "one of the biggest tax cuts in history," the pair's presentation was light on detail. 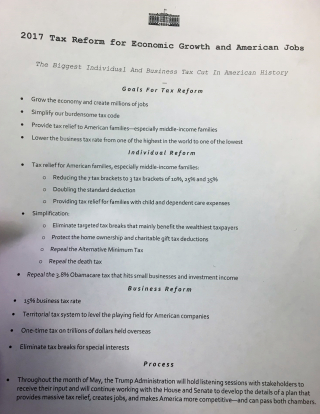 Instead, the Administration issued a one-page fact sheet of its core tax principals that were very similar to what candidate Trump promised pre-election.

In fact, the tax information distributed on Wednesday actually was much less than what Trump released when he was seeking the presidency.

In case you can't read that image to the right, here are the individual tax highlights:

On the business side, the top tax rate would be cut to 15 percent and the tax structure would be converted from the current worldwide system to a territorial one.

PR not policy: The brevity of the written material, along with Mnuchin's and Cohn's refusal to discuss details — those, they said, would be hammered out in negotiations over the next few months with Congressional leaders — has led many skeptics to categorize the tax plan announcement as a public relations attempt to pad Trump's list of accomplishments during his first 100 days in office. That traditional marker arrives Saturday, April 29.

Opposition on and off the Hill: Industry groups who could see dramatic changes in the tax treatment of their businesses also have raised issues. Although Trump's surrogates pledged that the mortgage interest deduction would remain, the housing sector, for example, is not happy.

"Current homeowners could very well see their home's value plummet and their equity evaporate if tax reform nullifies or eliminates the tax incentives they depend upon, while prospective home buyers will see that dream pushed further out of reach," National Association of Realtors president William Brown said in a statement issued after this version of Trump tax reform was released.

Many of Trump's tax proposals also will face tough critics on Capitol Hill, including some in his own party who are not happy with how much the proposal might increase the federal deficit.

So while Trump can add releasing an outline of tax reform to his 100-day list, actually getting a tax code overhaul enacted this year is going to be much more difficult.