Trump Tax March is over, but legislative efforts continue at all governmental levels to see presidential tax returns

Donald J. Trump fell back on his "I'm president and you're not" argument in rebuttal to the tens of thousands who marched Saturday, April 15, to demand the president release his federal returns.

The morning after the gatherings in almost every state, @realDonaldTrump Tweeted, "Someone should look into who paid for the small organized rallies yesterday. The election is over!"

Trump had said during the campaign that once the Internal Revenue Service completed its audit of his returns, he would share them. However, in January, White House counsel Kellyanne Conway said her boss won't release his tax filings. Period.

Still interested: Conway and Trump insist that "no one" and/or "only the media" care about his taxes. The self-named Tax March rallies that were held in nearly 200 cities across the country were planned, in part, to show that many Americans are still interested in Trump's taxes.

The main gathering was in Washington, D.C. But since over the weekend Trump was at Mar-a-Lago, his Palm Beach home/private club, protesters gathered in that South Florida town, too.

Saturday's events fell on the official 4/15 date that annual tax returns are due. That earns 4/15 this week's By the Numbers honor.

Quick note for taxpayers who are freaking out because April 15 is past. Because it was on a weekend day, along with a coinciding federal holiday today, this year the filing — and tax paying — deadline is pushed to tomorrow, Tuesday, April 18.

As for Trump's query about who paid for the marches, TaxMarch.org lists 73 groups that supported the events at some level. The separate marches across the country also had their own more-local supporting groups.

And marchers were quick to point out that they showed up on their own. They were not, as has been charged by the president in connection with other rallies protesting some of his policies and official actions, paid protesters. 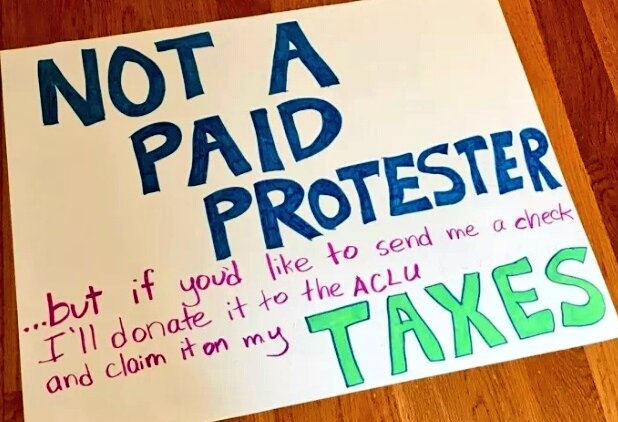 Transparency from Trump: The march organizers say that seeing Trump's 1040s is not their only goal. But public release of the filings is crucial, according to TaxMarch.org, to answer questions such as to whom does he owe favors, who are his policies really intended to benefit and who will he put first?

"President Trump needs to be straight with the American people," says TaxMarch.org of its mission on its website. "Working families are struggling to make ends meet, but we pay our fair share in taxes – does Donald Trump pay any at all? We, the American people, are standing together with a common belief in the value of transparency in government, fairness in taxation, and the value of our Constitution."

Tabulating the attendees: Tax March organizers and crowd estimate experts are still counting the total number of people who attended all of the rallies, but officials already reported 25,000 people marched in the nation's capital and 45,000 gathered in Trump's New York City hometown.

But the most welcome attendee at many rallies was an inflatable chicken with a Donald J. Trump hairdo.

Here's one of the chickens being set up on the U.S. Capitol gorunds in advance of the rally. 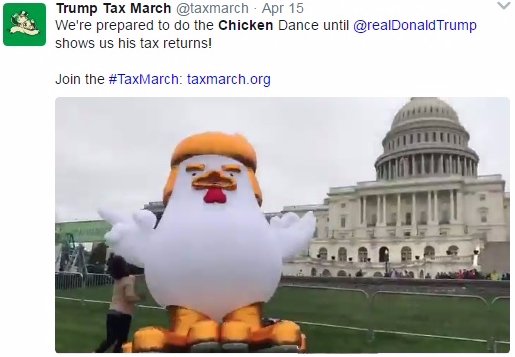 Click the image to watch the short video from @TaxMarch.

The D.C. fowl's air-filled relatives also showed up, as displayed in the Twitter-posted images below, in Chicago, San Francisco and Philadelphia.

Legislative efforts continue, too: While the protests got attention because they made for good video (and blog pictures), lawmakers from Capitol Hill to city councils continue to push measures that would make Trump and future candidates reveal their returns.

Last week as Tax March plans were being finalized, Rep Hakeem Jeffries (D-New York) introduced a resolution that would direct the House to delay consideration of tax-reform legislation until after at least some members of Congress review Trump's tax returns and determine how the president could benefit from tax-code changes.

The resolution also would have called on the House to request Trump's tax returns so that the chamber's tax-writing Ways and Means Committee could review them in a closed session.

Don't expect Jeffries' attempt to be the last.

Senate tax reform warning: Meanwhile, on the other side of the Hill, the Senate's ranking minority member last week warned that it will be difficult to pass tax reform without first seeing Trump's tax returns.

"Until President Trump releases his full tax returns, a cloud of suspicion will remain and make it much more difficult to get tax reform legislation through the Congress," said Minority Leader Sen. Charles Schumer (D-New York) during a press conference. "So for his own good, he ought to make them public. I think he just has an obligation to come clean."

Most recently, Colorado Secretary of State Wayne Williams said his office can comply with proposed legislation that would require presidential candidates to release their tax returns in order to appear on Colorado's ballot.

However, added Williams, he doesn’t think the bill is needed.

"Right now in Colorado the people can decide if someone's giving enough information or not," the Republican state official told The Colorado Statesman. "Letting the people make that decision seems to make sense to me."

Some of his fellow Centennial State lawmakers disagree, as do legislators in about half a dozen states who have introduced similar bills.

And a New York City council member hopes to use Trump's city golf course as leverage to get a look at his tax returns, according to the New York Daily News.

Councilman Corey Johnson plans to introduce targeted legislation that would require certain vendors with contracts for city concessions — specifically Trump Ferry Point LLC, the company behind Trump Golf Links at Ferry Point — to turn over the "personal tax returns of any individual named in the entity."

Do you agree with the Tax March participants and most Congressional Democrats that Trump should make at least some of his tax returns public? Or do you think the president is correct that few people really care?