Today is the day, according to Tax Foundation calculations, when the nation as a whole has earned enough money to pay its total tax bill for the year.

Critics of the tax-related designation, most notably the Center on the Budget and Policy Priorities, argue that Tax Freedom Day's average tax rate across the United States is misleading and doesn't accurately reflect typical U.S. households' tax burdens.

In answer to those concerns, the Tax Foundation acknowledges that its estimates reflect the average tax burden for the overall economy, rather than for specific subgroups of taxpayers.

So as not to compound any misunderstanding of what Tax Freedom Day shows, let's be clear that it's not the day until which the typical American must work to pay his or her taxes. So don't feel like you can slack off now.

But it also is fun to look at the breakouts of U.S. taxes as whole and how they are connected to our country's spending.

Later tax freedom: This year, the national Tax Freedom Day came 113 days into the year. That's one day sooner than last year. The days to reach Tax Freedom Day also are this week's By the Numbers figure.

If you include annual federal borrowing, which represents future taxes owed, Tax Freedom Day would occur 14 days later, on May 7. The latest ever deficit-inclusive Tax Freedom Day occurred during World War II, on May 25, 1945.

This year, notes the Washington, D.C.-based nonprofit, Americans will pay $3.5 trillion in federal taxes and $1.6 trillion in state and local taxes, for a total tax bill of $5.1 trillion. That's 31 percent of national income. 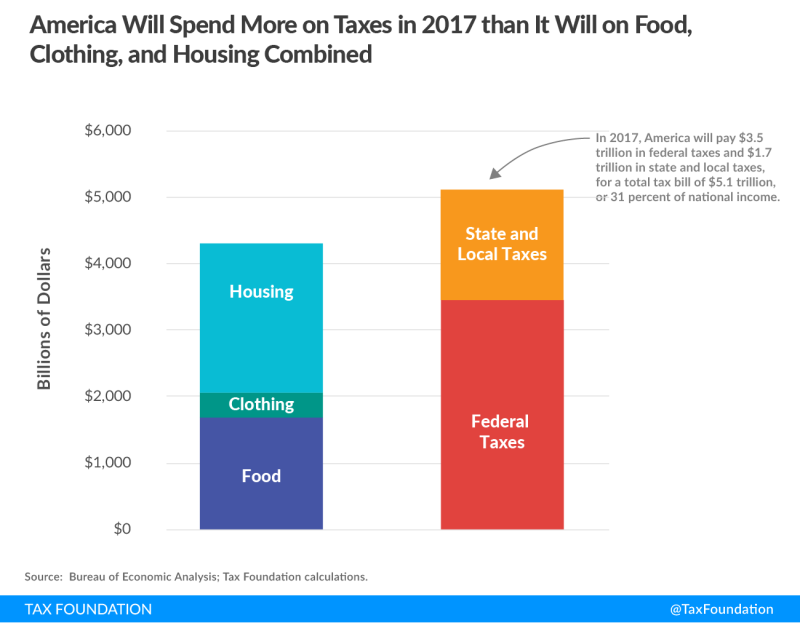 Collectively, adds Tax Foundation numbers crunchers, Americans will spend more on taxes this year than they will on food, clothing and housing combined. This tax tidbit sounds like something that might show up in next week's promised release of the Administration's latest tax reform proposal.

Days to pay: The 113 days it takes, overall, to pay this year's national tax bill are dominated — no surprise — by income taxes.

Americans will work for 46 days in 2017 to pay federal, state and local individual income taxes, according to the Tax Foundation.

Payroll taxes will take 26 days to pay, followed by sales and excise taxes at 15 days, corporate income taxes at 10 days, and property taxes another 10 days.

The remaining six days are spent paying estate and inheritance taxes, customs duties and other taxes.

State variations: Of course, the many taxes collected across the country mean that any individual tax burdens vary considerably.

Who has to wait the longest? Candles this year won't be lit on the Tax Freed Day cake in Connecticut until May 21.

Other states, however, already have had their Tax Freedom Day parties.

Residents of Mississippi bear the lowest average tax burden in 2017, meaning their Tax Freedom Day arrived on April 5. Also early this year were Tax Freedom Days in Tennessee on April 7 and South Dakota on April 8.

The Tax Foundation map below shows when your state's Tax Freedom Day arrives or arrived. 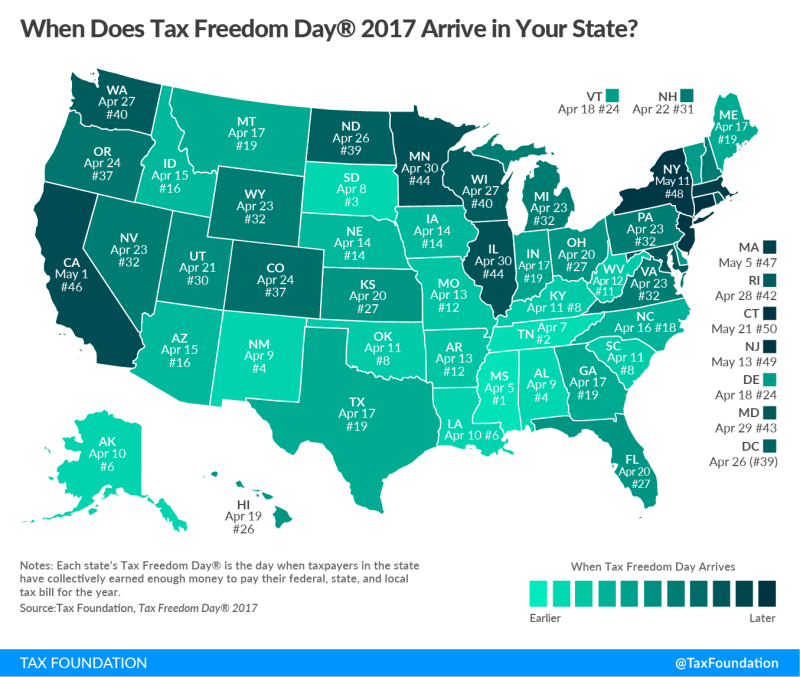 If you're done with covering taxes this year both at the state and federal levels, congrats!

If not, enjoy the rest of the weekend, then get ready to get back to work next week earning your state's taxable income so you can afford a big party when your state's Tax Freedom Day does arrive.