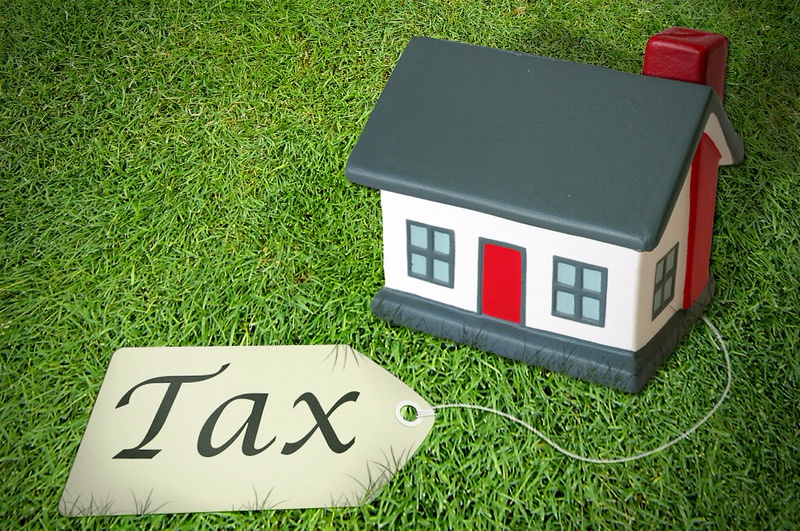 The federal deduction for local property tax payments could be eliminated as part of the Trump Administration's tax reform proposal.

I'm trying not to get too worked up about the Trump Administration's recently released tax cut plan. In a past career I worked on Capitol Hill and watched first-hand how tax proposals morphed from concept to actual law.

But I still get a little knot in my stomach when I think about losing my state and local tax write-offs when I fill out my federal Form 1040.

Wait, you say. You're in Texas. There's no state or local income tax in the Lone Star State.

You're right. But we make up for it in many parts of the state with big property tax bills.

An analysis by the Lincoln Institute of Land Policy of 2013 real estate taxation found Texas' property tax rates were the fourth highest in the United States and about 58 percent above the median rate for all states. Another study, issued in 2015 by the Tax Foundation, placed Texas sixth nationwide in property tax rankings. Comparisons of state real estate tax rates by CoreLogic in 2016 and WalletHub.com this March ranked Texas fourth and sixth, respectively.

Trust me, despite Texans' annoying affection for all things oversized, this is one area where many of us are not thrilled.

The only good thing about the bills is that they are tax deductible. But maybe not for much longer as local property tax deductions, in Texas and across the country, appear to be on the federal tax reform chopping block.

Eliminating deductions to pay for tax cuts: The Trump Administration's tax rewrite proposes to pay for its tax cuts in part by ending many of the tax breaks currently in the code.

"We are going to eliminate on the personal side all tax deductions other than mortgage interest and charitable deductions," said Treasury Secretary Steve Mnuchin when the plan was revealed on April 26.

Wait, wait, wait, yelled a lot of homeowners at their TV screens. OK, maybe not a lot were watching the press conference earlier this week, but you get the idea.

OK, maybe this is the conversation in my head, but some lawmakers already are making similar arguments.

Democratic states vs. GOP lawmakers: Since the proposal was released, most of the attention has focused on the states that collect a lot in state and local income taxes.

Whether by political design (I know, too much conspiratorial credit for policy wonks) or just coincidence, those primarily are states that tend to be Democratic, at least in national elections. The Wall Street Journal notes:

The top nine states for the deduction, measured as a percentage of income, all voted for Hillary Clinton, and they have 18 senators, all Democrats. In the House, those same states have 33 Republicans, a number that exceeds the party's overall governing margin. That means they have the numbers to protect the break — if they all agree on the policy and use their leverage.

National policy vs. local voters: However, as the late U.S. House Speaker Thomas P. "Tip" O'Neill so astutely observed, all politics is local.

And some Democratic and Republican lawmakers who represent residents who will be hard hit by the tax deduction changes are already digging in to fight for their preservation.

Rep. Peter King (R-New York), whose district includes part of Long Island, is one of those lawmakers. He told The Wall Street Journal that he agrees with the general idea of eliminating tax breaks and cutting rates, but he's not happy with a tax law change that would prevent his constituents from deducting their $12,000 annual property-tax bills from their federal income.

I'm hoping my Representative, also a Republican, shares King's point of view. (Yes, I'm writing as an individual taxpayer now, not as a tax blogger evaluating policy pros and cons.)

Of course, further underscoring O'Neill's adage, not all Texans are joining the wailing ranks of California, New York and New Jersey homeowners who stand to lose real estate itemized tax deductions. Texas's lack of an income tax and large segments of lower-taxed rural properties mean that the federal deductions make up only 2.5 percent of the state's overall income.

That helps explain why House Ways and Means Chairman Rep. Kevin Brady, a Texas Republican whose district includes a large swath of suburban and rural territory north of Houston, argues that repealing the break will lead to equal treatment of residents of high-tax states and low-tax states.

It's not a bad idea in overall policy terms. Everyone wants to get rid of what they see as unfair loopholes. But things get sticky when you start looking at specifics. What's unfair to some taxpayers is seen as necessary for others.

Welcome to D.C., Mr. Trump. Your self-proclaimed negotiation powers are going to be sorely tested as the tax reform debate progresses.

The Trump plan would eliminate targeted tax breaks that mainly benefit the wealthy, Cohn said, but "homeownership, charitable giving and retirement giving will be protected." (Data show that that the home mortgage interest and charitable donation deductions are used disproportionately by the wealthy, but that's for another discussion.)

Homeownership deductions as I read it includes property tax payments. I, my neighbors and lots of Representatives and Senators no doubt will argue that point as the tax reform/tax cut debate intensifies in the coming months.

Those of us who cringe every year when our tax appraiser and subsequent county tax assessor/collector notices arrive are clinging to hope that our county real estate taxes will remain federally tax deductible.

Appealing your property appraisal: Regardless of what ultimately happens to the property tax deduction, home owners nationwide will continue to have to deal with these assessments and taxes.

In many cases, that means contesting a real estate appraisal when it's surprisingly large. 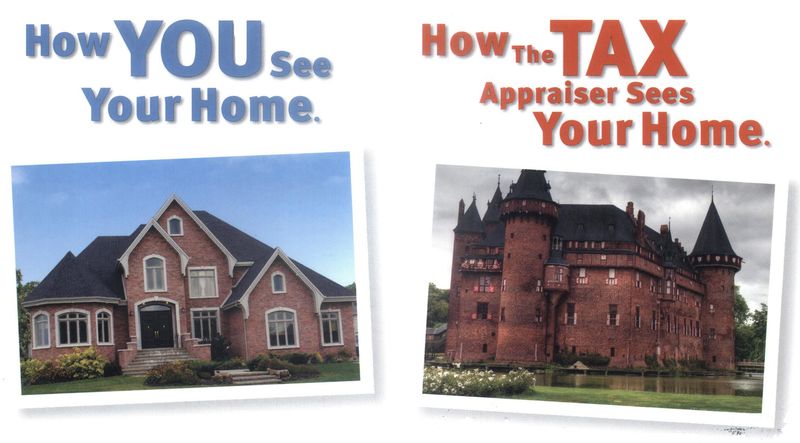 If your county appraisal review board agrees that your local officials overestimated what your home is worth, you'll get a lower figure. And that will mean a lower tax bill based on that value.

These 7 property tax appraisal steps will help you through the process.

Good luck on your appraisal appeal. And if you rely on the property tax deduction, add an 8th step: Contact your House and Senate members to let them know how you feel about possibly losing this tax break.

The United States is the world’s most richest, most powerful and technologically innovative country; but neither its wealth, nor its power, nor its technology is being harnessed to address the situation in which 40 million people continue to live in poverty in the United States. Many people barely surviving on Skid Row in Los Angeles. Thousands of poor people get minor infraction notices which seem to be intentionally designed to quickly explode into unpayable debt, incarceration, and the replenishment of municipal coffers. Yards are sewage-filled because state governments don’t consider sanitation facilities to be their responsibility. People had lost all of their teeth because adult dental care is not covered by the vast majority of programs available to the very poor. Soaring death rates and family and community destruction wrought by opioids, and people in Puerto Rico are living next to a mountain of completely unprotected coal ash which rains down upon them, bringing illness, disability and death.

The sewage-filled yards were found in poor areas like Lowndes County, Alabama, where many people cannot afford to install septic tanks, causing sewage to pool by their homes. This untreated waste creates the potential for all kinds of diseases. In Lowndes, it has led to the proliferation of hookworm, a parasitic disease of the intestines commonly found in the world’s poorest developing countries.

In most European countries, like Germany for example, public transportation works efficiently and there is a social safety net. While homelessness is a problem, it’s nowhere near as rampant as in the US and usually seems to be associated with addiction. People in Europe are generally much healthier and happier, housing and food and higher education are affordable and people don’t spend all their time working – they are able to take vacations and enjoy life in a way the vast majority of Americans are not. Europeans are typically entitled to lengthy paid maternity leave, whereas in the US working class women are forced to return to work in as little as two weeks.

Meanwhile, New York’s Subway system is decaying due to disinvestment and corruption. Last summer a train stalled, leaving passengers in the dark with no air conditioning for an hour. "As the heat of packed-together bodies fogged the windows, passengers beat on the walls and clawed at the doors in a scene from a real-life horror story,” reported the New York Times. In Washington DC, the nation’s capital, the Metro is always late and totally unreliable, with train fires becoming a regular occurrence while Amtrak trains experience routine derailments. These are just some examples of infrastructure decay. The list goes on: bridges are crumbling, schools are shuttered. In Baltimore dozens of schools had no heat during record freezing temperatures this winter. The only thing America’s leadership seems capable of investing in is prisons and war.

In America, the old devour the young. Young Americans are struggling under the weight of $1.4 trillion in student loan debt. But don’t let that confuse you about the state of America’s elderly. They too aren’t taken care of. In many European countries people are entitled to pensions and they can retire comfortably. In the US some have to work until they die as Social Security isn’t enough to live on and Medicare doesn’t quite cover all of their medical needs. As for healthcare, as many as 45,000 people a year die because they cannot access it.

And then there is the issue of water. There are over 3,000 counties across America whose water supplies have lead levels higher than in Flint, Michigan, and nothing substantial is being done to address the problem.

All this is taking place in a nation where inequality continues to climb. There are counties a few miles apart from one another where the life expectancy drops by 20 years. The life expectancy gap, as high as 20.1 years between rich and poor counties, resembles the gap seen between low-income countries versus rich countries. In other words, there are pockets of the US that have the characteristics of third world countries. It seems that the US in many ways, after having destroyed other parts of the world, has turned inward on itself, sacrificing its most vulnerable citizens at the altar of capitalism.

Bernie Sanders made an issue of this during his presidential bid, often noting in his stump speeches the dramatic difference in lifespan in McDowell County, West Virginia, where men live to about 64, and six hours away in Fairfax, Virginia, where the average lifespan shoots up to 82. Perhaps none of this should come as a shock in a country where the rich are getting richer, the poor get poorer and the middle class is collapsing, with most Americans living one emergency away from financial ruin.

All empires fall after all. And Donald Trump is accelerating the process. His Republican tax plan was a massive giveaway to the rich. It even included a special tax cut for private jet owners. The US might have the highest child poverty and infant mortality rates in the developed world, but the political class believe private jet owners deserve a break!

It is amazing how so many conversations in my Bristol based office in the UK end up being about Trump! I think he comes up more than Theresa May!

Anything with Trump's name on spells danger in my book!