The Internal Revenue Service's third attempt to bring in overdue tax money by using private debt collectors has been in place for less than a month, but some House members are already trying to halt it.

Opponents of the program question not only the collection system's costs and efficiency. They also worry that the use of private bill collectors will make it easier for crooks to create even more tax scams. 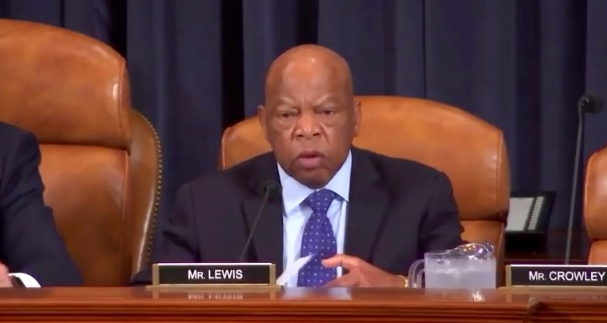 Rep. John Lewis makes his opening statement at last week's Ways and Means Oversight Subcommittee hearing on the 2017 tax season. During his remarks, Lewis announced the introduction of a bill that would, in part, repeal the required use by the IRS of private bill collectors. (Click screenshot to watch full subcommittee hearing on YouTube.)

"For the record, I want to be crystal clear — in today's world, private debt collection will only make a bad situation much worse," said Lewis. "We have been down this road before. It has been tried and tried again. Each and every single time, private debt collection fails. It creates confusion and wastes taxpayer dollars. Most importantly, the program does not help or serve the American people."

Twice tried, twice failed: This latest iteration of debt collectors going after delinquent taxpayers was mandated as part of a 2015 transportation bill. Advocates of the practice say it could bring the U.S. Treasury around $2.4 billion over the next 10 years from unpaid tax accounts the IRS has officially stopped pursuing.

But skeptics like Lewis, which include the current and previous IRS commissioners and the National Taxpayer Advocate (and me), point to prior private tax collection problems during the 1996 and 2006 efforts, including reports of abuse from taxpayers.

The 1996 pilot program was cancelled after 12 months and a net loss of $17 million. By the time the 2006 effort was halted, the U.S. government reported a loss of almost $4.5 million to the federal government, which took into account $86.2 million spent on program administration costs and more than $16 million in commissions to the private collection agencies.

Adding to the unease over this version of private tax debt collection is the involvement of a company, Pioneer Credit Recovery, that was among the agencies fired by the Department of Education two years ago from its contract to collect delinquent student loan debt.

In ending that program, the Education Department said its review found inaccurate information was being given to borrowers at "unacceptably high rates."

"Let me explain how things have changed since Congress last repealed this program," said Lewis in support of his legislation. "In the fall of 2013, the Treasury Inspector General for Tax Administration began investigating a new wave of scams. Nearly two million victims received telephone calls from people pretending to be IRS or Department of Treasury employees. Some of us — even Members of this very Committee — received calls from these criminals."

Now efforts to fight this scam, noted Lewis, are hampered by the use of private collection agents:

"The thieves demand money; they claim that the victim owes unpaid taxes. To date, these criminals have swindled taxpayers out of $55 million. Before the return of the private debt collectors, our best defense for taxpayers was a simple and clear message: the agency will never call you. Now, there is confusion. The new message is that the IRS will not call you, but a private debt collector might. It makes absolutely no sense."

Lewis nailed it in that last remark, which bears repeating (and emphasizing): "The new message is that the IRS will not call you, but a private debt collector might. It makes absolutely no sense."

TIGTA has tax scam concerns, too: During that hearing, the Treasury Inspector General for Tax Administration's (TIGTA) office also expressed concern about the private collection process, specifically the possibility that criminals will use it as the basis for added IRS impersonation scams.

"There's just a potential that people would use this new process to perpetrate scams that [are] already underway,” said TIGTA Deputy Inspector General for Audit Michael McKenney. To guard against that, McKenney said TIGTA believes the IRS needs to strengthen its process for authenticating taxpayer identities when they are being contacted by private debt collectors on behalf of the IRS.

McKenney also said TIGTA is concerned that there is no special private collector complaint mechanism through which the IRS could identify problems early on to improve the mandated debt collection program.

"Rep. Lewis has wisely proposed a quick and easy way to stop this program before it does any more damage to the U.S. Treasury or to taxpayers," NTEU National President Tony Reardon said.

"Repealing the IRS authority to use private collection agencies would save money and reduce taxpayers' exposure to identity theft and fraud," Reardon added. "We commend Rep. Lewis for trying to prevent the IRS from making this same mistake a third time."

NTEU's statement also noted that last week TIGTA announced that 11 people have been charged with crimes involving schemes to impersonate IRS agents and steal money from taxpayers by claiming they owed back taxes.

"Telephone scams are already a threat and allowing private companies to represent the IRS only compounds the problem," Reardon said.