That's the word from Internal Revenue Service Commissioner John Koskinen, who today made his fourth and final appearance as head of the U.S. tax agency before the National Press Club. 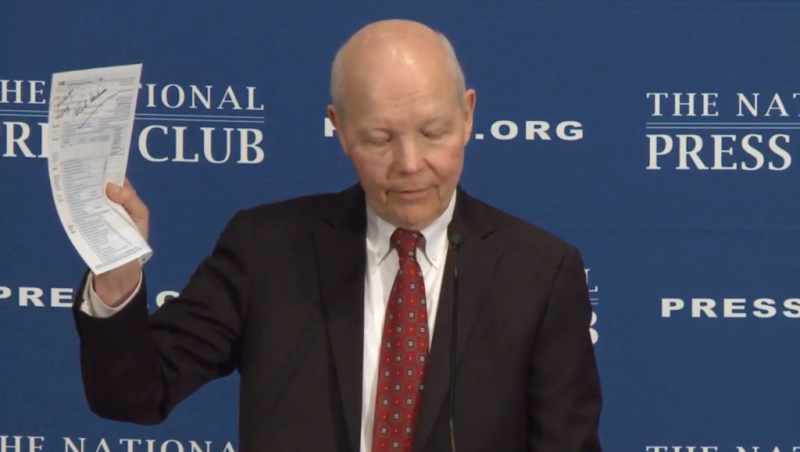 IRS Commissioner John Koskinen holds a paper Form 1040 during his speech to the National Press Club in Washington, D.C. Each event attendee got a souvenir form, complete with a personal "thanks for filing" note penned by the commish.

And if tax reform can help achieve that, then that's fine with Koskinen.

Simplification, not just reform: Before the IRS' head honcho finishes his term at the country's tax agency, he and his staff could be involved in an advisory role with the first (pick your adjective) promised/threatened tax reform in more than 30 years.

Koskinen was quick to preface his tax reform comments with assurances that the IRS is apolitical.

"I think it’s important to remind people that the IRS does tax administration, not tax policy. Policy decisions are the domain of the Administration and Congress," he said.

That said, the commissioner added that he and "a lot of IRS employees … are big fans" of any tax reform proposal that includes tax simplification.

"We have no dog in the fight in tax policy, but we have a great interest in tax administration," he said. "We've tried to make it clear [to lawmakers] on the Hill and with the administration that we want to work with them to make sure changes are enacted smoothly."

The IRS' goal is not for any particular types of tax laws, but rather for reform that makes the filing process easier, not more complicated, said Koskinen.

"Everyone at the IRS would be delighted if you could make the tax code simpler," he said.

And tax agency staffers already have offered suggestions to those who hope to rewrite the Internal Revenue Code on ways to streamline it to reduce complexity.

Holding up the paper Form 1040, Koskinen noted that for many younger attendees at the luncheon, this could be the first time they have ever seen the actual tax document.

"So anyone over a certain age, myself included, knows that filing your taxes used to mean grabbing a pen and filling in a blank 1040, line by line, signing it and mailing it in – in some cases, along with a check, if you owed money," he said. "And just like back in school, lots of people made mistakes filling out those paper forms – maybe transposing numbers or adding the columns incorrectly."

In the last 20 years, though, tax preparation and filing have changed dramatically.

This filing season, the IRS estimates that more that 87 percent of Americans, either themselves or through tax preparers, will complete their returns using tax software and then file the return electronically.

To accommodate these filers, the IRS has been focusing on enhanced digital options.

IRS.gov obviously is a big component and a big success. Earlier this year, Koskinen said, the website had more than 25 million page views and over 6 million unique visitors in just one day. Over a recent 30-day period, it was the number-one government website, attracting more visitors than the National Weather Service.

Interactive online taxpayer experience: Now the agency is looking to beyond the static website with online accounts for taxpayers.

"So where are we, exactly, with online accounts?" asked Koskinen. Here's where.

The first step was taken at the end of last year, he said, when the IRS introduced the online balance option that lets  individuals check how much, if any, taxes they owe.

Then came the recently-launched second feature that allows taxpayers to view their payment histories, Koskinen said.

"Going online to check your balance at your financial institution has been around so long it's something people take for granted," he noted. "But for the IRS, it's a major step forward."

More as long as there's money: And more features are on the way — as resources permit, the commissioning noted, sufficiently throwing some shade at impending further IRS budget cuts.

"One that's in the testing phase will allow for secure online messaging between taxpayers and the IRS to communicate about issues that come up on their return," Koskinen said. It's not clear whether that's just email or possibly texting, too.

Immediate electronic exchanges, he noted, "will help us resolve these issues much faster than the current way, which is to send a letter to the taxpayer and then wait for a response through the mail."

Security first: Obviously, the communication option will take time as the IRS works to ensure that such messages will be secure.

"Let me be clear: before we offer a fully functioning online account, we must have a strong authentication process built in, to protect taxpayers from identity theft," Koskinen said. "This may mean added time and extra steps for people, but it's worth it to keep these accounts secure."

There is no argument within the IRS about how to balance convenience and security, the commissioner added, "because security is the highest priority. That's how it has to be."

Are you a digital devotee, tax and otherwise? Do you look forward to the day when all your interaction with the IRS — and here's hoping they are few! —  will be electronic?

Or does the possibility of identity thieves hacking into your tax account make you hesitant to ever use such an option?