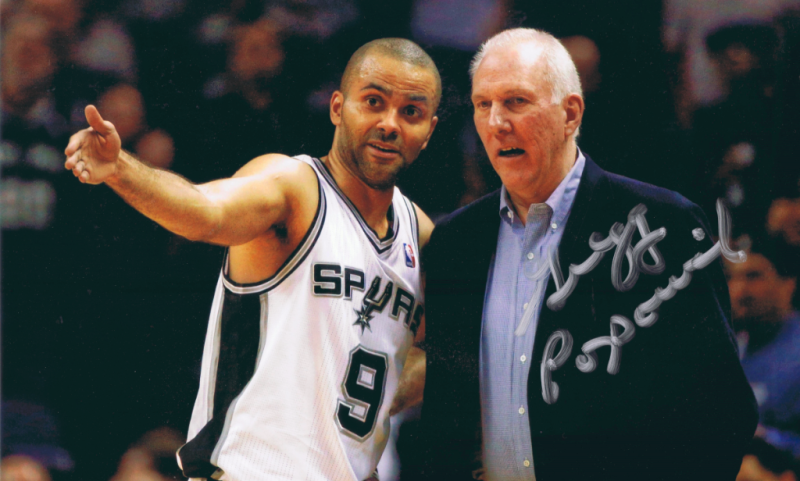 Gregg Popovich is in the midst of going for his sixth NBA championship as a head coach, but he's already the champ to one Memphis, Tennessee, restaurant employee.

Pop, as the coach of the San Antonio Spurs is known, apparently left an almost 613 percent tip after a visit April 21 to McEwen's on Monroe. The dollar amount is just as astounding: $5,000. 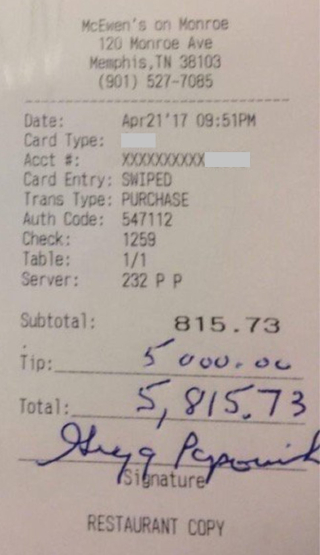 Is it really Pop? Amateur sleuths are on the case, looking to confirm that the idiosyncratic Pop is indeed a major league big tipper shown on the receipt, shown at left from a Twitter post after first being uploaded to Redditt.

Unofficial graphologists are poring over Pop's penmanship, like the autograph in the photo above, comparing the receipt's signature with the coach's other John Hancocks.

Then there's the date on the receipt. It was an off day in the playoff series between the Spurs and Grizzlies.

The eatery's owner told the San Antonio Express-News that Popovich "has been in our restaurant in the past multiple times."

And a final big tip-off that Pop indeed was the grantor of the generous gratuity is that McEwen's reportedly is known for its wine selection and Pop apparently appreciates a good glass or two of vino.

Tips and taxes: Naturally, the tip raises a variety of tax issues.

My first thought went to the lucky server. I'm sure he or she is thrilled with the added five grand. But the $5,000 isn't tax free.

As noted in the April tax moves there in the ol' blog's right column (as well as in previous posts on the usual tips folks receive and more atypical tips), servers who receive more than $20 in tips for a month must report the amount to their employers, usually by completing Form 4070.

Tip income issues: However, there's a big potential problem for this tip recipient with an amount as large as that left by Pop. The seemingly lucky server might not make enough in regular wages to cover the tip taxes.

In such cases, you need to work with your employer to, for example, have the taxes taken out of future paychecks.

Remember, too, that if your restaurant has a tip-splitting or tip-pooling arrangement, the server will report only the tips he or she receives. That's why it's important to keep a record of your tips.

If you get tips as part of your work, you can get more information directly from Internal Revenue Service in Publication 531, Publication 1244 and in a special IRS video.

If you're an employer in an industry where tips are a regular part of your staff members' income, the IRS this week issued a new Fact Sheet on the differences between reporting tips and service charges.

Deducting meal (+ tip) costs: Now to possible tax considerations for Pop and others who opt to financially recognize a restaurant staff member's efforts.

Since he's not talking (yet) about the tip, I'm going to look at a couple of possibilities.

First, if the McEwen's tab was incurred while Pop and others discussed team strategy for the next game in the NBA playoffs, it could be a legitimate business expense.

When a business employee has an expense account, that person needs to submit receipts for reimbursement by his or her employer. If the company decides not to fully cover the costs, the excess can be claimed as an itemized business expense on Schedule A when that worker files his or her taxes.

But in order to be of any tax value, qualifying business expenses and other eligible miscellaneous claims must exceed 2 percent of the taxpayers adjusted gross income.

For sole proprietors, that's Schedule C. That form offers a variety of ways to write off your business costs.

One of those lines, specifically 24b, is for deductible meals and entertainment, which also tells you to "see instructions."

The reason for you need added info in filling out this line is that only 50 percent of your business meal is tax deductible. The instructions (or your tax pro and/or tax software) will help you do the math.

Tip amount counts, too: But there's also some good tax news if you're a big tipper, although probably not in the same league as Pop. Your tip amount counts toward your overall meal amount that is then cut in half for deduction purposes.

So if you pick up the more realistic business meal tab of $40 and you added a 25 percent tip, then your full $50 dollar expenditure counts toward figuring your deductible amount. In this case, that would be a $25 tax deduction. (Yes, I used a calculator to be sure!)

Weekly Tax Tips launch: This taxes and tipping tip earns the honor of being the first Weekly Tax Tip of 2017. (Say that fast three times!)

You'll see this post highlighted (shortly!) in the upper right corner where the Daily Tax Tips have lived for the last three-plus months. Now that we're past the main tax filing season, look for a new weekly tax tip every Wednesday.

And here's a bonus unofficial tax tip for today. Whether you're receiving the tip or leaving it, keep good records.