At midnight on Donald J. Trump's 99th day in the Oval Office, the federal government could shut down.

That would be a public relations disaster for the 45th president, who's struggling to show that he and his administration can get things done as he promised in his 100-day contract with voters. 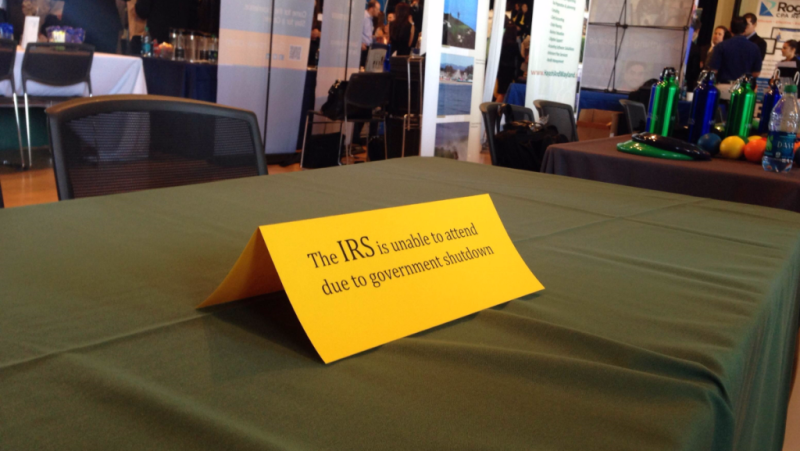 "Saw this at my school's accounting career fair," wrote LittleNuclearReactor in a Reddit post during the last government shutdown Oct. 1-16, 2013.

But it could be a bigger disaster for folks waiting on their federal tax refunds.

Millions left waiting for tax cash: The Center for American Progress (CAP) estimates that if the federal government shuts down for two weeks this spring, that closure would delay nearly $8 billion in tax refunds for roughly 2.5 million families.

The hold-up would be because the Internal Revenue Service would, as it did 3½ years ago when Congress couldn't agree on funding for federal offices, would be mostly closed. In October 2013, the IRS furloughed almost all its workers for the 16-day shutdown, temporarily halting the issuance of $4 billion refunds to individual and business taxpayers.

In 2017, the IRS already is facing a slower than usual tax season. With the April 18 filing deadline looming, the agency said it expected around 13 million taxpayers to either file our 2016 returns or get an extension. By April 14, the IRS said it had in hand only 118.5 million of the 153 million returns it expects to eventually receive this year.

Money problems for some filers: And while late filers tend to postpone the task because they owe Uncle Sam, some folks who file near the annual deadline actually get refunds.

If the federal government shuts down because lawmakers can't agree on how to pay for its operations, then many of those late-filing tax refund recipients will be out of luck.

"Every tax refund that is delayed has the potential to throw family budgets into turmoil," write CAP analysts Alex Rowell and Harry Stein. The reason? Many people who get tax refunds say they rely on their annual tax cash to meet day-to-day needs.

No federal tax refund check could mean a missed rent or car payment or fewer groceries for the family.

CAP also used the latest IRS data on how tax refunds are distributed across states and estimated the state-by-state impact of any refunds that might be delayed due to a federal shutdown later this week.

One-two refund delay punch: A refund delay due to a government shutdown would be the second blow this filing season to taxpayers who count on their refund money.

Thanks to a federal law change, taxpayers who got refunds in full or part because they claimed the additional child tax credit or Earned Income Tax Credit had to wait until at least mid-February for those U.S. Treasury checks. Many actually didn't see their money until the end of that month or later.

So if you're a late filer who's expecting a refund you planned to use for necessary expenses, you might want to look at how you can adjust your budget. Now.

It also couldn't hurt to call your Representative and Senators and let them know that while they are debating greater economic issues in connection with government funding, there's a very personal micro matter that directly affects your own personal economy.