Gorsuch officially joins Supreme Court, but many other judicial vacancies remain, including 3 on U.S. Tax Court 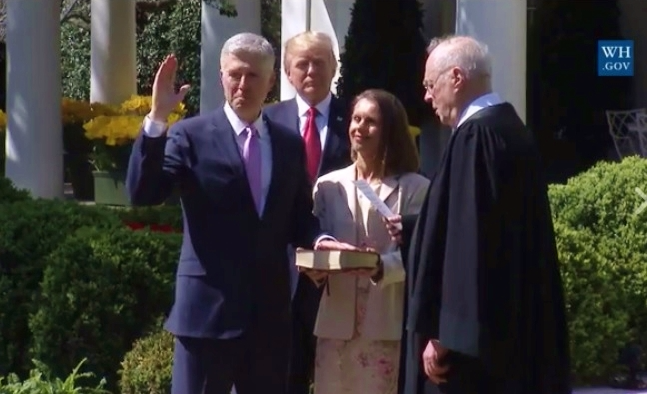 The 49-year-old Gorsuch no doubt will have a say on many tax matters during his lifetime tenure on the Supreme Court of the United States (SCOTUS) in coming years.

But the filling of the SCOTUS slot, which was kept open in a partisan battle for more than a year as the Republican Senate refused to hold a hearing on Merrick Garland, President Barack Obama's nominee for the seat, also brings attention to other judiciary vacancies.

Many open bench seats: When Trump assumed the presidency, he also assumed responsibility for an estimated 100-plus judicial vacancies. That's more than double what Obama assumed from President George W. Bush.

The reason is the same one that led to Gorsuch and not Garland ending up on the U.S. Supreme Court: politics. After Republicans took control of the Senate in 2015, confirmation of presidential appointees to federal circuit and district courts slowed dramatically.

The American Bar Association (ABA) in September 2016 sent a letter to the Senate leadership urging that chamber "to address the backlog of judicial vacancies by promptly scheduling floor votes on the 20 district court nominees pending on the Senate calendar."

Tax court, too: Then there's the U.S. Tax Court. This specialized judicial forum is where taxpayers can contest Internal Revenue Service decisions.

It includes 19 judges who are presidentially appointed. Currently, the Tax Court has three vacancies.

Obama nominated Copeland in May 2015 and Stoll in November 2015.

A third Tax Court vacancy subsequently opened up when Judge John O. Colvin assumed senior status on the tax bench. No nominee for his slot was named before the changing of the White House guard.

Cost to government, taxpayers: "The failure to vote on the pending nominees will waste taxpayer dollars and government resources if the nomination process must begin again because the pending nominees are not approved during the 114th Congress," wrote William H. Caudill, chair of the ABA Taxation Section, in the Nov. 18, 2016, letter.

In addition, 52 tax law professors and academics sent their own letter to the Senate leaders with the same Tax Court nominees vote request.

Alas, the Senate did not heed Caudill's or the tax academics' warnings.

And it's likely that Caudill's other concerns will come to pass:

"We believe that vacancies on the Tax Court result in longer waits for cases to be heard at the cost of uncertainty to the taxpayers and the government. In addition, the accrual of interest and potential penalties can increase, significantly, the amount a taxpayer ultimately owes. Prolonged vacancies result in hardships for taxpayers, as well as increased workloads for the other Tax Court judges."

Renomination option: The possibility has been raised that Trump might renominate Copeland and Stoll since the vetting work already has been done.

"This shouldn't be a political appointment; this should be based on qualification," Danshera Cords of the University of Pittsburgh School of Law told Tax Analysts.

Unfortunately, Cords added, while appointments to the Tax Court are historically not terribly partisan, "I think right now there is a lot of uncertainty."

Are you a practitioner who has dealt with the Tax Court? Do the Court's three vacancies worry you and your clients?