And here's a note for your tax planning purposes. Brady sees any changes made in coming months to the Internal Revenue Code as being retroactively effective from Jan. 1, 2017. 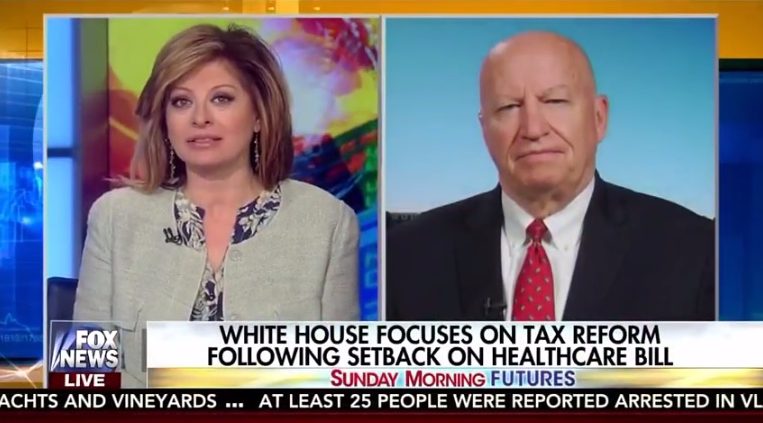 That will make tax moves this year, uh, exciting.

Effective dates are always a pain any time Congress changes laws. Retroactive ones, however, can be a big mess when it comes to taxes, even with laws you want.

Do we take Brady at his word?

Or do we wait to see if every item that might get tweaked indeed makes it into the final bill?

Or do we wait until we actually see a bill with Donald J. Trump's signature on it before making our tax moves?

And what will any wait — or any delayed move based on presumed/proposed changes — mean to our taxes?

Go bold on corporate tax changes: Maybe we should be thankful that, as Brady told Maria Bartiromo on Fox News' "Sunday Morning Futures" show today, major tax reform only happens once in a generation.

Since big tax law changes are infrequent, Brady said the plan is to go bold. Specifically, he said "very bold."

This American Authors' song is for Rep. Kevin Brady and his tax-writing colleagues.

"The priorities are growth, designing a code not built to punish people or wring money from them, but actually to grow jobs, wages, and the U.S. economy," Brady told Bartiromo.

"We've decided since this is just once in a generation we get this opportunity, we can't go mediocre. We can't shoot for the middle of the pack. We have to be very bold."

Border tax in the mix: The first step is to revise corporate taxes, he said. And, yes, a border tax will be part of the plan.

However, any border tax will be structured to drive U.S. competitiveness, not to raise revenue, said Brady. Sorry all you wall builders looking for that money.

The goal with any corporate tax change, said Brady, is to level the playing field for U.S. and foreign made products. That includes eliminating tax incentives to move headquarters or manufacturing facilities overseas.

But if there's no added revenue from a border adjustment tax, asked Bartiromo, is there wiggle room in the tax rate to raise money? Perhaps going from a 20 percent corporate tax rate favored by Brady to a 28 percent rate that some tax policy experts have suggested.

"No, that will not make us competitive," he said regarding a higher business tax rate. "That won't even get us to the middle of the pack. Frankly we are getting our brains beat out because our competitors are beating us with lower rates, they no longer tax worldwide, they border adjust."

Texas aside: Folksy phrases like "getting our brains beat out" delivered in a Lone Star drawl is the best (only in some cases) argument for putting my fellow Texans in spokesperson positions.

Instead of focusing on revenue neutrality per se, Brady said "we're going for growth but also wanting to balance the budget by growing the economy in such a significant way that it helps us get back to a balanced budget and back to that day when we  start paying down the national debt." Google dynamic scoring.

House plan as starting point: Brady, naturally, believes the House tax plan is the best starting point from which to move tax reform this year.

And in making that argument, Brady threw some shade — I honestly can't tell if it was intentional or just my perception — at how the recently scuttled Republican replacement for the Affordable Care Act, which would have repealed the health care law's associated taxes, was handled.

Republicans on the Ways and Means Committee have "spent five years getting ready for this moment," Brady said. "We never stopped working on transforming the [tax reform] blueprint into legislation."

That preparation, added Brady, is why his Party is turning the page on Obamacare and "going full steam ahead" with tax reform.

"Tax reform is exciting. It's why we came here. It's the number one priority for the president and Republicans," said Brady.

And while the failure of the GOP's Obamacare replacement plan does make tax reform more difficult since the health care law's taxes remain in place, Brady said he and his colleagues are ready to "move forward with bolder tax reform."

He's looking at having a measure out of the House and to the Senate this spring and completed this year, effective for tax filing purposes for 2017.

Reagan redux: And yes, there will be fights over special interest tax breaks.

"Everything that drove the Reagan reforms has recreated itself," he said. "The American public is just sick of this complicated tax code full of lobbyist loopholes and special interests. The odds are greater than ever this year to pass tax reform."

And the individual tax change goal, according to Brady, is to make the tax code so simple that 90 percent of Americans will be able to file using a postcard style system.

I'll believe that when I see it.

Brady, however, is confident.

"Tough stuff is why it doesn’t happen often," he said, "but the easiest way to make tax reform fail is to not go bold."