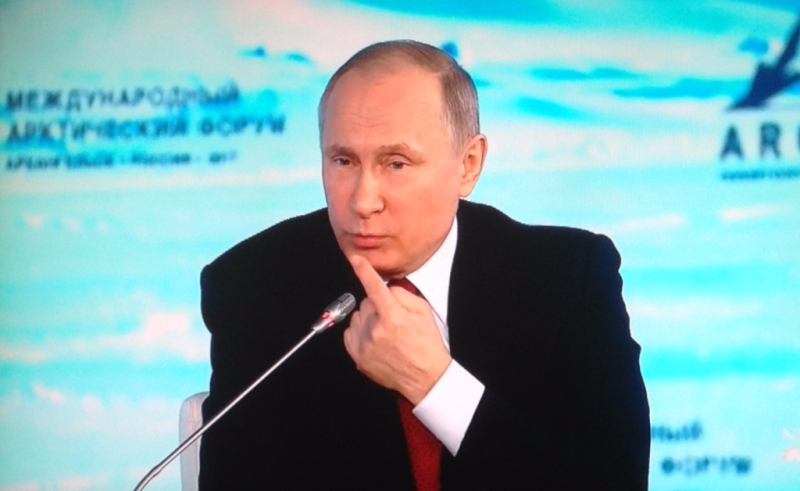 Even Vladimir Putin, Russia's president and Donald J. Trump's sometimes bromantic partner, chimed in on the issue of his country's hacking of computers during America's 2016 presidential election.

"Ronald Reagan, debating about taxes and addressing the Americans, said, 'Watch my lips.' He said, 'No. Watch my lips. No,'" Putin said through an interpreter during a CNBC-moderated discussion March 30 at the annual Arctic Forum in the Russian city of Arkhangelsk.

Nice try, Vlad, but it looks like a couple of things were lost in translation and re-translation.

Wrong U.S. president: I understand why Putin, deemed the most powerful person of 2016 by Forbes, might have had Ronald Reagan on his mind.

Back in the 1980s, Reagan was the U.S. commander in chief during the still on-going Cold War. And as history books and the FX television show The Americans note, Ronnie took a hard line against the Ruskies.

During that time, Putin was a young KGB agent serving in an isolated part of East Germany who, according to numerous reports, was shaped by the changes that decade brought to his homeland.

But the famous American tax quote was not spoken by Reagan. Rather, it was one uttered by his vice president and Oval Office successor George H.W. Bush.

"Read my lips. No new taxes," Bush said at the 1988 Republican National Convention when he accepted the Republican presidential nomination.

Result not as expected: Of course, the elder Bush — father of George W., our 43rd president and namesake of what became known as the Bush tax cuts — ended up paying a big political price for his no tax pledge.

Most political analysts say Bush père's decision to work with Democrats in 1990 to raise taxes in order to reduce the federal budget deficit ended up costing him reelection two years later.

Hindsight has been a bit kinder to the Bush 41. In 2014 he received the John F. Kennedy Library Foundation's Profiles in Courage Award for his tax action that put the country's fiscal welfare ahead of politics.

Accolades are nice, but I suspect a part of George H.W. Bush still would have liked to have lived in the White House for an additional four years.

Putin watch: As for the current Russia-U.S. election inquiries, Putin also said at the gathering in the White Sea port city near the Arctic Circle that "all those things are fictional, illusory and provocations, lies."

"All these are used for domestic American political agendas," the Russian president told the conference audience. "The anti-Russian card is played by different political forces inside the United States to trade on that and consolidate their positions inside."

Or will the Russia inquiries on Capitol Hill come back to similarly bite Putin and, more importantly, some high-ranking U.S. citizens?

We'll just have to, as Putin suggested, keep watching.