The United States and Canada share more than the world's longest undefended border. They also share attacks by cyber criminals on their online tax systems. 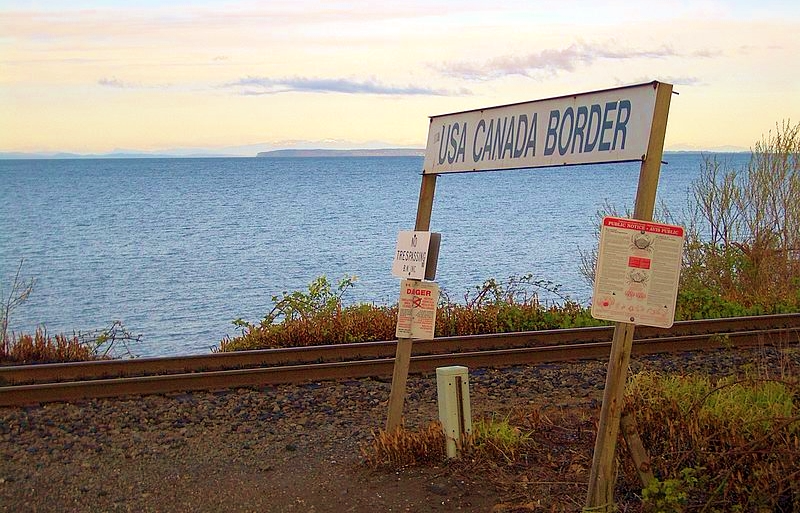 A sign at the point where the railroad crosses the U.S.-Canada border at Peace Arch Park. This is the westernmost point on the continuous main section of the border. (Photo by Vmenkov via Wikimedia)

Canada Revenue Agency’s website was down from the afternoon of Friday, March 10, until 5 p.m. Sunday, March 12, after tax officials discovered the site had a security vulnerability.

South of the 49th parallel on Thursday, March 9, the Internal Revenue Service suspended access to its online tool used by federal student aid applicants to obtain financial information from their tax records.

In both cases on either side of the border, tax officials stress that the online actions were merely precautionary. No U.S. or Canadian taxpayer accounts were compromised.

IRS FAFSA problems: The IRS and Department of Education announced in a March 9 joint statement that the IRS' online tool to allow student aid applicants to retrieve tax data, normally available on both FAFSA.gov and StudentLoans.gov, was unavailable.

In 2012, the IRS started offering those who use FAFSA, aka the Free Application for Federal Student Aid, online access to their income and other tax return information so that they could more easily complete the form. With the online IRS FAFSA tool, applicants automatically transfer the required tax data onto the federal financial aid form.

Not only is the electronic transfer of data easier and quicker, it also was seen as a way to reduce the chance that a financial aid request would be selected for verification. This added review process requires applicants to submit more paperwork to support their tax information, which slows the process.

But the online Data Retrieval Tool (DRT) was turned off last week, according to the announcement, as "part of a wider, ongoing effort at the IRS to protect the security of data." Tax and education officials say they became concerned "that information from the tool could potentially be misused by identity thieves." 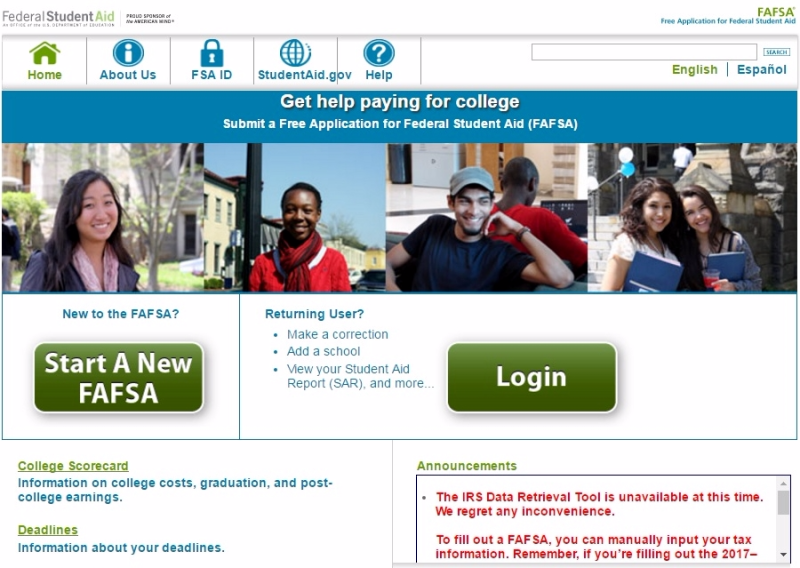 If you go to FAFSA.gov to apply for student aid, you'll see notification (in red in the lower right corner of the screenshot above) that "The IRS Data Retrieval Tool is unavailable at this time. We regret any inconvenience. To fill out a FAFSA, you can manually input your tax information. Remember, if you're filling out the 2017–18 FAFSA form, your 2015 tax information is required (not 2016)."

The tool was taken offline, as the saying goes, in an abundance of caution. The scope of potential identity theft is being explored, with the IRS and federal student aid (FSA) personnel jointly investigating the issue.

"At this point, we believe the issue is relatively isolated, and no additional action is needed by taxpayers or people using these applications," said the IRS and FSA. In addition, the two federal agencies "are actively working on a way to further strengthen the security of information provided by the DRT."

Temporary means … : So how long will the FAFSA tool be down? That's unclear.

The immediate time frame expectation is that the DRT will be offline for several weeks. "We will provide additional information when we have a specific time frame for returning the DRT or other details to share," according to the announcement.

UPDATE: On June 2, the Department of Education announced that the IRS FAFSA online income verification tool was working for certain students who apply to repay their eligible loans with income-driven repayment plans. Details in this post.

In the meantime, the IRS and FSA note that applicants still can manually provide requested financial information from copies of their tax returns.

Students and their parents making college and college financial plans hope that the resumption of the online DRT will be quick. But the IRS takes possible ID theft threats to its online systems seriously, meaning that thorough vetting of the danger and ways to protect the system often mean major down time.

When criminals hacked the agency's Get Transcript online tool, that option was inoperable for more than a year.

Northward, ho! Canada's online tax site was down most of the weekend, but now is back up and allowing that nation's taxpayers to get back to their electronic tax business.

Sunday, March 12, evening, the Canada Revenue Agency (CRA) announced that all of its digital services had returned to normal operation.

"Individuals, businesses and representatives are now able to file returns, make payments, and access other digital services available through the CRA's website, including all our secure portals," according to statement posted on the CRA website. 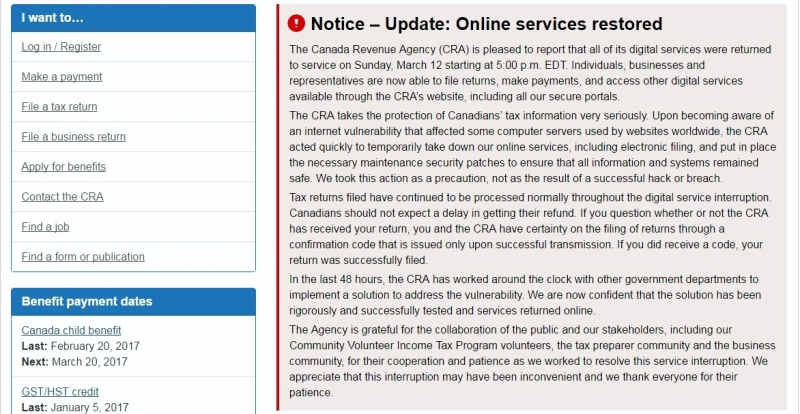 The CRA statement noted that once the agency became aware of an internet vulnerability that affected some computer servers used by websites worldwide, it decided to temporarily take down online services, including electronic filing.

While the system was inaccessible, the CRA said it installed "necessary maintenance security patches to ensure that all information and systems remained safe. We took this action as a precaution, not as the result of a successful hack or breach."

The CRA said that during its online system's down period, Canadian tax returns that were previously filed were processed as normal and refunds from those filings should not be delayed.

While online tax interruptions are annoying, kudos to both IRS and CRA officials for taking quick steps to stem potential security problems.

I'm sure I'm not alone in saying I prefer to be inconvenienced for a bit rather than have to deal with a stolen tax refund or a stolen identity.