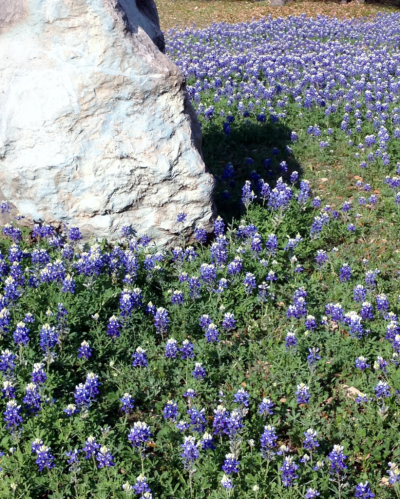 Bluebonnets, the state flower of Texas, are among the wildflowers that emerged early this year thanks to warmer than normal temperatures. (Photo of a Hill Country patch on March 18, 2017, by Kay Bell)

Hello, Spring! You used to be my favorite season, but for the last few years — OK, the last dozen that we've been back in Texas — you've arrived in late February or early March and only lasted about three days.

By the time you're official, which was when you clocked in at 6:29 a.m. Eastern Daylight Time (5:29 a.m. CDT; I was asleep) today, it generally feels quite summery in Central Texas. The high here on this first official day of Spring 2017 is supposed to hit 85 degrees.

We are not alone. A new set of maps produced by the U.S. Geological Survey-USA National Phrenology Network shows just how unusually early spring is arriving across the United States.

So I've got lots of company when comes to dealing with warm weather. I've yet to turn on the air conditioning, but….

And it's still cold in some parts of the country. Are you drunk, Mother Nature?

Tax help dealing with weather: Regardless of which interior temperature control system you're using, you're probably trying to make it as energy efficient as possible.

Wasted heating or cooling is an expense that can be corrected.

It's also an expense that for a brief while still gets a bit of help via the Internal Revenue Code.

If you made certain home improvements last year to improve your home's energy efficiency, you might be able to claim up to $500 in tax credits for those upgrades on your 2016 return that's due by April 18.

The best thing about this tax break is that it's a credit. Unlike deductions that reduce your taxable income, tax credits help directly cut what you owe Uncle Sam dollar-for-dollar.

There are three key factors for this tax break, which is officially known as the Residential Energy Efficient Property Credit and claimed on Form 5695.

First, the residential tweaks had to be eligible energy improvements, such as windows, doors, insulation, central air conditioning system, furnace, and roofing. Energy Star has the details on each qualifying home improvement made in 2016.

Second, you can't have used up your maximum of $500 in credits in prior tax years.

For example, you added new windows in 2014 and took the full $200 credit allowed for this upgrade on that year's return. In 2015 you put in extra attic insulation, giving you a $150 credit that tax year. Then last year you replaced your front door with a more energy-efficient one.

Finally, the work was done by Dec. 31, 2016. As mentioned earlier, this tax credit expired at the end of last year.

So if your home refurbishing ran into 2017, good for you making sure your home is in good shape, energy and otherwise, but you're likely out of tax luck. I don't see a lot of support right now for renewing this tax break this year, either as part of an extenders package or in the much hoped-for overall tax reform.

Solar power still gets tax relief: But there is an energy tax break that is still in the Internal Revenue Code through 2021 and is perfect for sunny locales like the Lone Star State.

As I noted back in January when we were shivering through a bit of a cold snap, this tax break covers up to 30 percent of the solar energy system's cost. It's available at this level through Dec. 31, 2019.

The next year, the credit drops to 26 percent and falls to 22 percent in 2021, the final year (for now) that the solar tax break is on the books.

While the phase-out is a bit of a bummer, there is some good news.

First, since solar energy units are expensive, there's no cap on the eligible solar components that can be counted under the credit.

Also, the tax break applies to upgrades made on existing homes, as well as those under construction.

Finally, you can claim it for systems installed in your primary residence and a second home.

Judging by the amount of sun we're getting and the heat that it's generating, it might just be time for the hubby and me to look into solar and the tax credits while they're still available.

How about you? If you're interested in solar power and the accompanying tax credit, the sooner you install a system, the quicker you'll get energy savings, along with a bigger federal tax credit.

Will you be taking the home energy tax break on your 2016 taxes? Have you claimed energy tax credits before? Would a tax break make a difference in whether you made such home improvements?