When it came to tax filing, the Devil made him not do it

A Pennsylvania man said he didn't file 10 years' worth of federal tax returns because the forms required use of a Social Security number, which he considered analogous to the Biblical "mark of the beast."

The 59-year-old Bird-in-Hand, Pennsylvania, resident was convicted on March 7 of failing to report $2.3 million he earned as a medical equipment salesman.

Foreign accounts, coins used in scheme: To evade the tax due on the millions, federal court papers show that Schlosser used foreign business trusts and corporations that he registered in Nevada to hide the money.

The original indictment handed up by a Pennsylvania grand jury in April 2016 alleged that Schlosser's money was deposited into non-interest earning investment accounts that the defendant established at two investment companies. This arrangement, according to court documents, was done in an effort to keep the firms from issuing 1099-INT forms, which the Internal Revenue Service could use to verify Schlosser's earnings.

To further conceal his receipt of income, federal investigators charged that Schlosser purchased gold coins from at least four coin dealers. He then reconverted the coins into cash through multiple purchases.

Ultimately, a Silver State-based mail forwarding service sent the money to Schlosser in Pennsylvania or to others who Schlosser had convinced to serve as trustees for one or more of the foreign business trusts, according the Department of Justice.

Federal law enforcement officials said that Schlosser also had tried to revoke his American citizenship and Social Security identification, as well as declared himself a sovereign citizen not subject to federal income taxation. 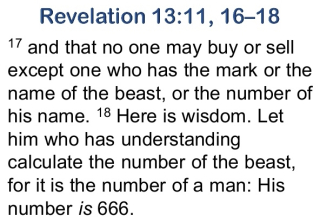 666 defense dismissed: Schlosser testified in his own defense during this month's tax evasion trial. He cited the passage in the New Testament chapter of Revelations as his religious objection to the use of a Social Security number.

Schlosser's sentencing is scheduled for June 10. He could be sent to prison for up to five years and face $450,000 in fines, plus court costs.

Those are substantial punishment amounts, but for this week's By the Numbers honor, I'm sticking with 666.