'Love & Taxes' funny on screen, but not filing in real life is no laughing matter

Are you planning to catch up this weekend on some of this year's Academy Award winning movies you've yet to see? Me, too.

But I'm also putting on my viewing list a newish flick, "Love & Taxes." 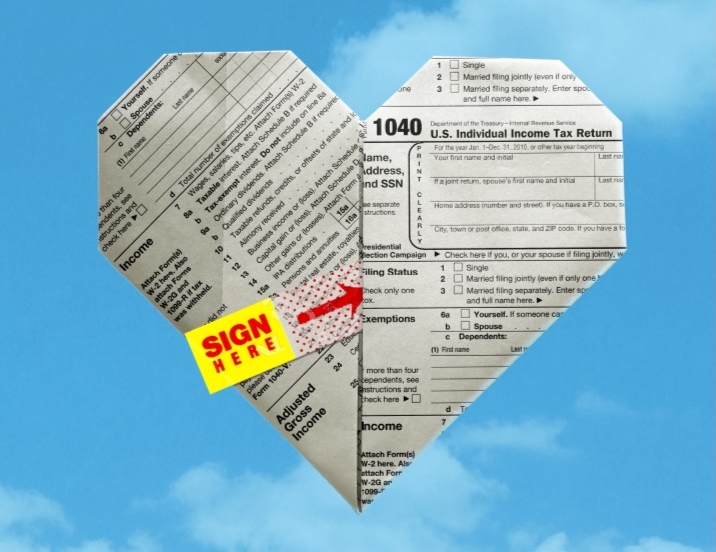 Reel tax life: I'm not making this up. It's a real movie that, according to its website, is "a riveting comic tale of seven years of tax avoidance."

OK. You probably want a less vested review. Here's what Ken Jaworowski had to say in Friday's New York Times:

Likability goes a long way in "Love & Taxes," a comedy that relies on the friendly style of its star to carry a rambling story. If there aren’t many big laughs here, there are enough smiles to make the time pass pleasantly enough.

The movie, which was finished in 2015 but just hit the Big Apple, follows the "possibly real life" attempts of Josh Kornbluth, a monologist and movie maker, to get straight with the Internal Revenue Service after not filing returns for seven years.

The film's pivotal irony is that Josh ignored his tax filing responsibility despite working for what he describes as, and transfers to the screen under his brother Jacob's direction, a high-powered tax attorney.

Unfortunately, "Love & Taxes" is not in any Central Texas theaters yet. It probably never will be. But the trailer below …

[Kornbluth] brings humor to a situation — paying taxes — that’s agonizing to plenty of people. That alone is a minor marvel.

It's not everyone who can turn revenue rulings and amended filings into the stuff of laughter.

Have intrigued me enough to put "Love & Taxes" on my find-it-when-it-streams list.

Don't try this in real life: Chuckling at one man's tax troubles on screen is one thing. Doing the same in your real life is not funny.

If you don't file, you'll face penalties, interest on any unpaid taxes and possibly jail time.

You've still got plenty of time to get your 2016 taxes done. The filing deadline this year is April 18.

And if for some reason you miss it, file as soon as you realize your oversight.

If you're avoiding filing the forms because you owe more than you can pay, file anyway. Pay as much as you can, even if it's not very much. Then set up a payment plan for the balance with the IRS.

And if you are in a tax situation similar to Kornbluth's cinematic one, then find a good tax professional to help you, too, make things right with Uncle Sam's tax collector.

My awards and Twitter connection: As you probably know by now, the accountants who represented PricewaterhouseCoopers at the Oscars for years, Brian Cullinan and Martha Ruiz, will not be back for the 2018 show.

And the venerable accounting firm that has tallied the Academy of Motion Picture Arts & Sciences annual awards votes for 83 years may even lose the account.

One report as to how Best Picture presenter Warren Beatty got the wrong announcement card is that Cullinan, who was in charge of distributing that particular envelope, was distracted backstage, in part by Tweeting a photo of Emma Stone who had just received her Oscar for Best Actress.

And, irony again (or maybe just coincidence; I have message in to Alanis seeking clarification), that acting award was the one Beatty was handed.

Last fall at FinCon, the annual personal finance bloggers conference, I got to be a part of the Plutus Awards ceremony.

Plutus trophies and plaques go each year to the cream of the crop in personal finance blogging, podcasting and general money education efforts. (Shameless plug: I'm honored to have twice won for Best Tax Blog.)

I know how the PwC guy felt being a part of a very big deal awards show, and I too shared the experience on social media. 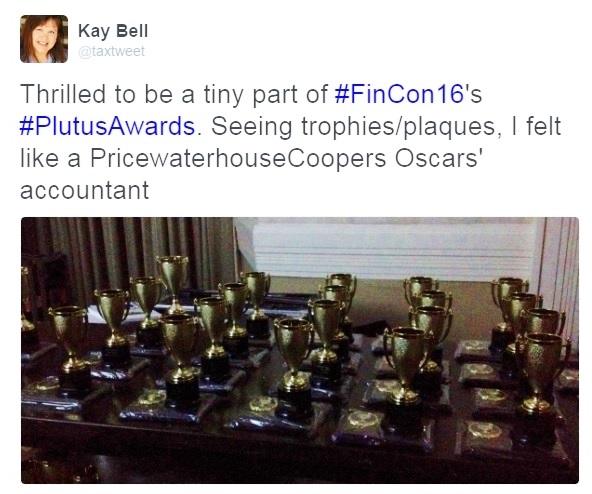 My experience, however, was much less controversial. All the awards went to the correct FinCon/Plutus honorees.

And while not as pricey -- we are, after all, folks who write and talk about smart ways to save and spend money -- our post-ceremony parties were pretty damn fun, too.

I trust that you will keep it up and we will have more data and helping news from you. By and by thank you such a great amount for your post. assignmentland gives composing help to the individuals who look for assistance from them.

Decent post.I like your written work style and language.I am an apprentice in writing.I trust this will help me to compose better.I discovered these blog articles are superior to other blogs.Thank you such a great amount for sharing this blog.

Thanks for the update, Brian. It sounds like a fun movie and I'll definitely stream it.

Thanks for the write-up. Love & Taxes may make it to Texas, but if not, we'll be on iTunes and other digital platforms by June. Thanks, the producer