The Internal Revenue Service collected more than $3.3 trillion during the 2016 fiscal year. 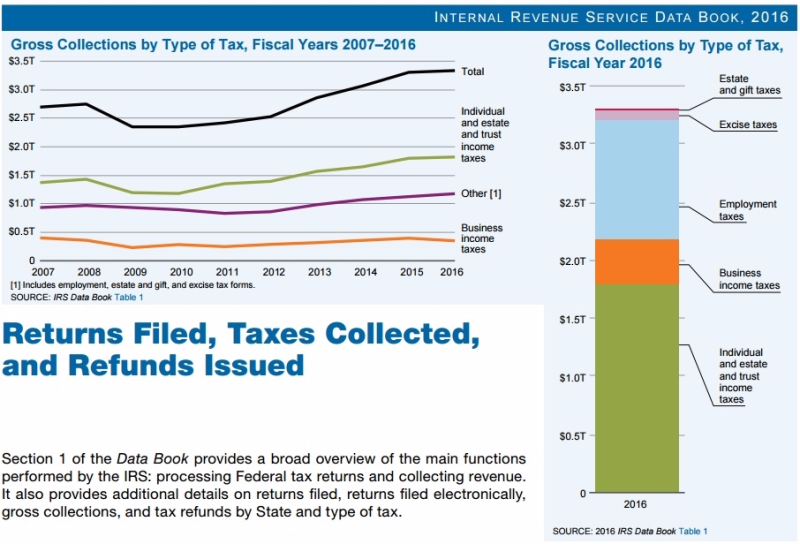 After taking a dive in 2009, IRS collection of taxes has increased each of the last five fiscal years even though it's been forced to so with smaller budgets.

Bringing in tax dollars and making sure that you, I and all the other U.S. taxpayers comply with the nation's tax laws are two of the IRS' major jobs.

But for the last few years — specifically since the 2015 controversy over the agency's handling of applications for tax-exempt status by conservative tea party groups — it's been tougher for the IRS to do that job because Republican control of Congress has meant budget cuts.

Smaller FY18 IRS budget cut: It looks like that trend will continue in fiscal 2018. But there's a bit of good news.

The Trump Administration's budget proposal calls for a $239 million cut for IRS operations from what it got this year.

While it's still less money, it's only a 2 percent cut and much more generous than original projections that the nation's tax agency could take a 14 percent hit in the new presidents first budget.

Maybe Treasury Secretary Steven T. Mnuchin, who said in his confirmation hearings that the IRS needs more money and staff, did make a difference.

Some members of Congress are hoping they can help, too. U.S. Rep. Keith Ellison is leading an effort to get the IRS more money for FY18. (Photo by Lorie Shaull via Wikimedia)

Rep. Keith Ellison (D-Minnesota) and 47 of his Democratic colleagues cited Mnuchin's public comments that cuts at the agency could be preventing it from doing its job.

"An increase in funding for the IRS will reverse the short-sighted and damaging budget cuts which have increased our national debt, left the IRS ill-equipped to combat refund errors and fraud, drastically reduced taxpayer services, dangerously reduced audits, and limits the IRS’s ability to implement new laws passed by Congress," the Representatives wrote.

"The IRS is by far the most efficient tax administrator of all the major economies, with others spending up to twice as much to collect a dollar of revenue," Ellison et al added. IRS Commissioner John Koskinen has noted in several public speeches that for every dollar the agency gets, it brings in $6.

The union that represents Treasury workers, including those at the IRS, welcomes the support from Ellison and his colleagues.

The IRS is at a tipping point," said Tony Reardon, president of the National Treasury Employees Union. "It is time to properly fund this agency so taxpayers get the services they need, identity theft and other tax fraud schemes can be thwarted, and Americans have confidence in the voluntary tax system."

Will Congressional appropriations panels listen to Ellison and other IRS supporters? Maybe.

But I suspect that the best the IRS can hope for right now is that it will not face any funding cuts deeper than what Trump now seeks.

More IRS data: The annual IRS Data Book is a tax and numbers geek's Bible, so I'll be spending some time going over the latest info on the tax agency. Admit it; you're jealous of my life!

As I sort through the latest figures, I'll blog in the coming days about things I find particularly interesting.

You have been promised ... or warned!