IRS telephone service is improving, but will it last?

Have you called the Internal Revenue Service for help this filing season? Your chances of getting through are markedly better than they were a year ago.

After years of declining telephone assistance, an IRS executive and two other federal agency reps told a March 8 joint hearing of two House Oversight and Government Reform subcommittees that taxpayer telephone service has been improving. 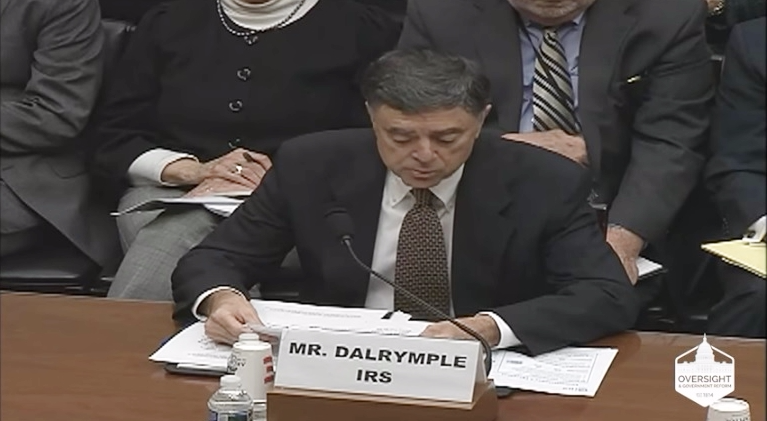 Internal Revenue Service Deputy Commissioner John Dalrymple and reps from TIGTA and GAO testified this week before a joint hearing of two House Oversight and Government Reform subcommittees about IRS service. You can watch the full hearing, but since it was interrupted by House votes, the taped session was saved in Part 1 and Part 2 videos.

IRS can hear you now: John Dalrymple, IRS deputy commissioner for services and enforcement, told the subcommittee members that the average level of service on the agency's toll-free telephone lines last filing season, generally between January and mid-April, exceeded 70 percent. That meant that almost three-quarters of the people who wanted to speak with an IRS representative by phone were able to do so.

The 2016 figure was almost twice the 37 percent average service level the agency reported during the previous year's filing season.

The reason for the improved phone help last year, said Dalrymple, was additional money from Congress. The funds were used to hire about 1,000 extra temporary IRS employees to help improve phone service during the 2016 filing season.

However, when the temp workers ended their stints, the level of IRS phone service for all of fiscal year 2016 ended up at 53 percent, said Dalrymple. Still, that was much better the 37 percent level in 2015.

This year, things continue to look up for callers.

TIGTA hears it, too: So far this 2017 filing season, the IRS has achieved an 82.1 percent level of telephone service, answering 2.5 million calls with an average answering speed of just more than 7 minutes, according to testimony from Russell Martin, assistant inspector general for audit at the Treasury Inspector General for Tax Administration (TIGTA).

The mid-February call service number is up from the 76.1 percent reported by the IRS for the same time period in 2016.

The IRS is projecting it will be able to answer around 75 percent of calls during the full filing season, with that falling to 64 percent for the overall 2017 fiscal year that ends on Sept. 30.

GAO makes it a telephone trifecta: The Government Accountability Office also found that the IRS provided better telephone service to callers during the 2016 filing season compared to 2015. 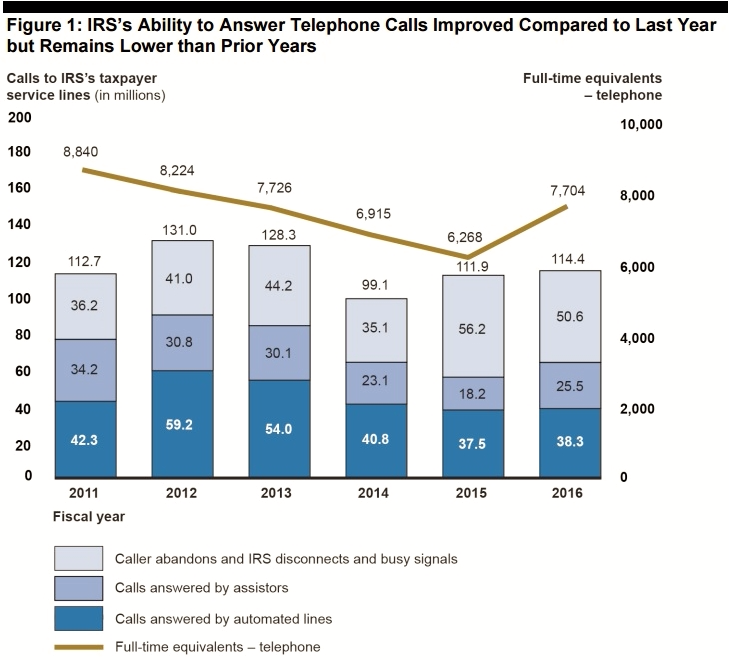 GAO's analysis found the 2016 phone service level during the 2016 filing season reached 72 percent. That was, according to GAO, the highest level of service reached during the peak filing period since 2011.

In addition, during the 2016 filing season, taxpayers waited about 11 minutes to speak with an IRS employee, which was substantially better than IRS expected and an improvement over the close to 23-minute average in 2015, according to Lucas-Judy's testimony.

GOP still angry with IRS: Will evidence that phone and other IRS service to taxpayers improves when it has more money help persuade Congress to increase the agency's budget?

The tone from many of the Republicans members of Oversight's subcommittees on Government Operations and on Healthcare, Benefits and Administrative Rules was not encouraging.

Rep. Mark. Meadows (R-North Carolina), chair of the Government Operations subcommittee, questioned why current IRS improvements and services are below levels reported a decade ago.

Rep. Jim Jordan (R-Ohio), chair of the Health Care, Benefits and Administrative Rules subcommittee, accused the agency of not having "its priorities in the right place."

Jordan also brought up the elephant that's been in every Capitol Hill hearing room since May 2013, the IRS' targeting of Tea Party and other groups seeking 501(c)(4) tax-exempt status.

The GOP, which has controlled the House and Senate since 2014, has used that as one of its justifications for annual cuts to the IRS budget. That looks to continue, with Republican Donald Trump's fiscal 2018 budget proposal reportedly calling for 14 percent reduction in IRS money.

If that happens, get prepared to again wait longer for the IRS to pick up the phone.

Have you noticed an improvement in the IRS' phone help line this year? Or have you been stuck listening to boring hold music while you wait for an agency representative.

How about you tax pros; any noticeable improvement this filing season over last year when you call your special phone line for help?