Republicans took a major step toward tax reform on Monday, March 6, with their health care replacement plan that kills more than a dozen Obamacare taxes. 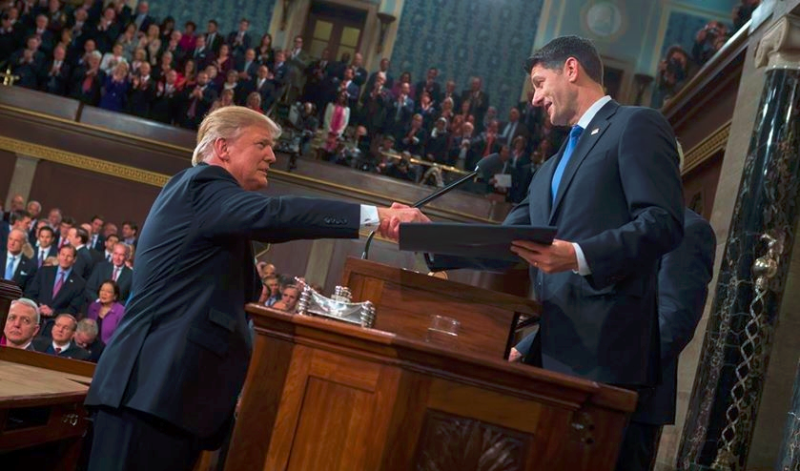 Donald Trump greets House Speaker Paul Ryan before the new president's first address on Feb. 28 to a joint session of Congress. The two men now must work together to enact a replacement for the Affordable Care Act. (Photo courtesy Speaker of the House)

Not only would the Affordable Care Act (ACA) changes erase some levies from the tax reform slate, passage of a GOP replacement health care plan also would clear the decks for a focused debate on overhauling the tax code. Republicans have always said that health care must come before the party tackles tax reform. Check, at least for getting that process going (again).

Plus, by doing away with most of the taxes created back in 2010 to pay for the ACA, it takes them off the tax reform to-do list.

The end of Obamacare taxes: So what taxes will be gone if the GOP's American Health Care Act (AHCA) is approved?

On the personal side they include the taxes on four popular health-related expenses that I blogged about back in February:

New health care credits: Instead of the stick of a tax penalty if we don't buy insurance, the AHCA would provide tax credit carrots to encourage coverage.

The new credits would be income based, increasing as people age since older folks typically need more health care. The credits also would be reduced for single people who make more than $75,000 a year and married couples with twice that annual income.

The AHCA proposed credits would replace the current premium tax credit, the government subsidy that is available to people who buy health care policies through the marketplace.

Other ACA taxes on the chopping block: In addition to those four tax measure I focused on earlier, the GOP's AHCA also would, on the personal tax side, eliminate:

The Cadillac Tax, the 40 percent excise tax on high cost health care plans also would go, but not until 2025 under the GOP proposal. This enforcement of this tax already had been pushed back to 2020.

A variety of business and industry taxes also are slated for the dead tax dumping ground, such as the 2.3 percent tax on medical devices (such as stents, etc.); taxes on health insurance providers and makers of prescription drugs; and the limit on how much health insurance companies can deduct of their highly-paid executives' salaries.

That corporate bigwig income provision has generated a lot of immediate opposition as a hand out to the wealthy insurance industry. The ACA restricted such corporate salary write-offs, which generally are up to $1 million, to $500,000 for health insurance companies' highly paid executives.

Paying for GOP health care: The Obamacare taxes were created to pay for the health care reform act. With their removal, how will the Republicans foot the bill for their AHCA?

They say they're working on it. Really.

Straight from the Frequently Asked Questions section of its web page outlining the AHCA, the GOP says:

How are you paying for this plan? How much is it going to cost taxpayers?

We are still discussing details, but we are committed to repealing Obamacare and replacing it with fiscally responsible policies that restore the free market and protect taxpayers.

The Congressional Budget Office is working on an estimate of how much the GOP plan would cost.

Legislative timing: We could get a look at how the financing would work as the tax-writing House Ways and Means Committee begins marking up the AHCA tomorrow, March 8.

The House Energy and Commerce Committee also has jurisdiction over the health care proposal. It also is expected to consider the GOP health care measure on Wednesday.

A full House vote could be as early as next week.

While the House is looking at a quick turnaround of the AHCA, even with GOP control of that chamber there could be speed bumps. Some Republicans are not happy with the bill, calling it Obamacare Light. Others don't like the Medicaid provisions in the bill.

And expect the Senate to take a bit longer look at the measure when it finally is passed to that side of Capitol Hill.

Still, it looks like some health care and tax changes are on the way.