Donald Trump's 2005 Form 1040 offers some info, raises more questions and explains why he hates the AMT

Are we having tax fun yet? We did for while last night when it looked like we finally might get a look at Donald J. Trump's taxes. 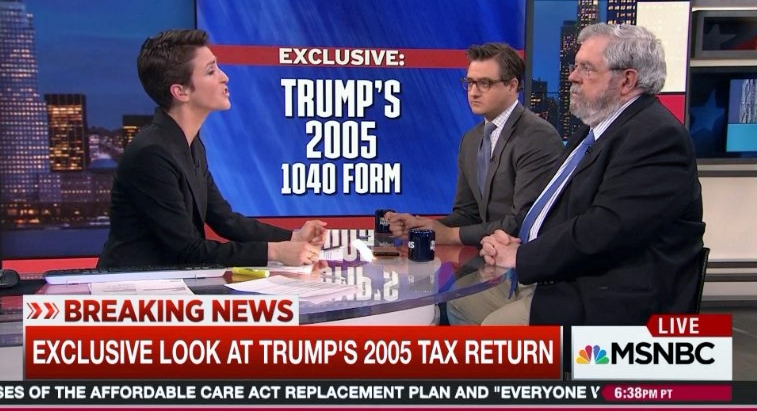 Trump tells tax all? The tax return provides some basic info, but raises a lot more questions, including who leaked it.

I'm among those who believe this Form 1040 that Trump and his wife Melania Knavs filed for the 2005 tax year probably was sent by, or at least at the direction of, Trump himself.

Why do I suspect a surreptitious self-release? Five reasons.

1. Note the "Client Copy" stamp on page 2 of the 1040 that was mailed, unsolicited and anonymously, to Johnston.

2. Note that the White House confirmed the authenticity of the return and issued an indignant statement slamming the "dishonest media" before the cable show aired. No surprised mad scrambling, delaying or angry Tweeting. He finally went there this morning, denouncing the report as FAKE NEWS, followed by one about a Snoop Dogg video. Still…

3. Note that it's not a complete tax return, only the Form 1040 sans any associated schedules or supporting documents that would provide more insight into the president's tax life.

4. Note that this sliver of Trump tax data got us, for a while, talking about Trump's old taxes instead of the embattled Republican Obamacare replacement plan or the new Administration's Russian connections.

5. And note, finally, that this particular return actually put Trump's tax paying in a positive light. His $38 million tax bill that year produced an effective tax rate of around 25 percent, higher than many other wealthy taxpayers, including some politicians (more on this later).

If I sound cynical, I am.

While it's good to see any tax filing by Trump, it's certainly convenient that the return that showed up in Johnston's mailbox was from a year in which 45 paid taxes, unlike 1995.

That year, New York, New Jersey and Connecticut state tax returns that The New York Times received and published back in October 2016 show that Trump used losses on his casinos to zero out his income and therefore avoid any taxes.

2005 basic tax details: For the 2005 tax year, though, this federal return shows that Trump made almost $153 million and paid $36 million in taxes.

Most of the earnings, more than $67 million, were listed on the form's line 17, designated for "Rental real estate, royalties, partnerships, S corporations, trusts, etc. Attach Schedule E" Schedule E was not part of the material in the mailing to Johnston.

But he made much more from investments, reporting nearly $32.2 million in lower-taxed capital gains and around $9.5 million in interest and more than $314,000 in ordinary dividends, which are taxed as regular tax rates.

Those 1995 filings also come into play 10 years later. The state returns showed a $916 million business loss that, according tax experts who examined the filings in light of tax laws in effect back then, likely provided Trump with a yuge legal deduction that may have allowed him legally avoid paying federal income taxes for 18 years.

Based on that, the latest conjecture is that the $103.2 million loss claimed on line 21 of Trump's 2005 filing is carryover of the 1995 losses. We don't know for sure, though, since we can't, as the form's annotation instructs, "SEE STATEMENT 1."

Final tax bill tally: When the deductions -- itemized ones of more than $17 million, but again no details because no Schedule A in included -- are counted (but no exemptions because the personal exemption phase-out applied to the high-earning future First Couple), the Trumps had taxable income of almost $31.6 million.

And that brings up back to the previously mentioned 2005 tax year bill of $38.4 million.

Trump's effective tax rate of around 25 percent on more than $150 million  is 10 percent higher than what the prior GOP presidential candidate, billionaire Mitt Romney, paid according to the much more complete 2011 return that Romney released during the 2012 campaign.

President Barack and Michele Obama paid an effective federal tax rate of nearly 19 percent on their 2015 return, the last one they filed as occupants of the White House.

In fact, notes Johnston in his analysis of Trump's return on his DCReport Facebook page, in 2005 "Trump was paid that year like a member of the 0.001%, but he paid taxes like the 99%. And by at least one measure, he paid like the bottom 50%."

That fact was seized upon by Trump supporters on social media. See cynical note #5 earlier.

All about the AMT: There was one other notable tidbit in Trump's old tax return. It underscores yet again how taxes, like everything connected to the new prez, are personal. (That's not just my take; read his Twitter account.)

Trump's regular tax bill that year was $5.3 million. But he had to pay an additional $31.3 million in alternative minimum tax.

The alternative minimum tax, usually referred to as AMT, is a parallel tax system with its own set of rules, tax rates and fewer deductions than the regular tax code. The AMT was devised in 1969 as a way to prevent 155 taxpayers making more than $200,000 per year (that's about $1.3 million in today's dollars) from using tax breaks to avoid paying any tax.

The AMT created a lot of problems for a middle income taxpayers before it was revised in the fiscal cliff bill, officially the American Taxpayer Relief Act, or ATRA, of 2012. Under that law, since 2013 the AMT exemption amount has been adjusted annually for inflation.

But it still is a hated tax, one that both Republicans and Democrats have tried for years to kill.

Trump, too, made elimination of the alternative tax part of his campaign tax proposal. Thanks to this glimpse of his 2005 tax return, we now know why.

You can read more about the AMT in today's Daily Tax Tip, my NerdWallet piece How Does the Alternative Minimum Tax Work?

Mea culpa for the typos. Corrected.

This article makes reference to Trumps return for 2015. It IS for 2005. Credibility means...get it right...When you say 2015, but MEAN 2005, you sound like Trump in his tweets. As readers, we should not have to second guess what you MEAN.