Democrats strike out on 3rd attempt to get Trump's taxes

Everybody saw this coming. The Republican-controlled Ways and Means Committee killed the latest effort by Democrats to get a glimpse of Donald J. Trump's tax returns.

The tax-writing panel held a hearing Tuesday, March 28, afternoon on H. Res. 186, a measure sponsored by committee member Rep. Bill Pascrell Jr. (D-New Jersey), that would have ordered the Treasury Secretary to provide 10 years of Trump's tax returns to the House. 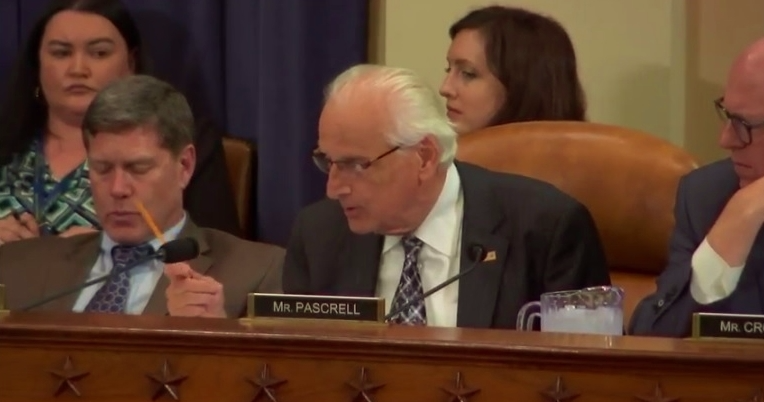 New Jersey Rep. Bill Pascrell makes a point during the markup of his resolution seeking to see a decade's worth of Donald Trump's tax returns.

In addition to the president's returns for tax years 2006 through 2015, Pascrell's resolution sought other financial information, such as debts held by foreign governments, foreign investments and the use of tax shelters.

The committee rejected Pascrell's bill in a party-line 24 to 16 vote.

This law gives the Ways and Means Committee, along with Senate Finance and the Joint Committee on Taxation, the power to request the tax returns of an individual and review the materials "only when sitting in closed executive session, unless such taxpayer otherwise consents in writing to such disclosure."

Pascrell said the effort to see Trump's tax returns is a way to "follow the money" as it relates to potential connections between Trump and Russia.

"I'm going to keep my remarks short today because, frankly, this resolution is a procedural tool being utilized – and I think abused – for obvious political purposes," said W&M Chairman Rep. Kevin Brady (R-Texas) in his statement opening the markup.

That sentiment was echoed by Rep. James Renacci (R-Ohio), a tax professional who said he has audited, reviewed and prepared tax returns for 30-plus years and who called Pascrell's bill a "political mission." Rep. Kristi Noem (R-South Dakota) called it a "stunt that some even question the legality of."

"Tax returns do not list investments. They don't. What does list investments are the reports, the disclosure reports which Mr. Trump has done," Renacci said. "Let's face it, release of presidential tax returns by candidates is tradition, it's not law, and if we abuse the authority given to the tax-writing committee under 6103 of the tax code to obtain the president's tax returns in this manner, then I guess we can pick any political person we want to go after their tax returns."

Democrats seek foreign relations, tax info: Democrats, however, expanded their interest in Trumps returns from the Russian implications to other more tax-specific legislation that will come before the committee.

The president wants to lead the effort for tax reform, but is hiding his, said Rep. Sander Levin (D-Michigan).

Doggett raised the question as to Trump's motivation when it comes to tax reform that Ways and Means will consider. The Central Texas lawmaker elaborated:

"After all, this is a gentleman who has bragged during the course of his campaign … about his ability to manipulate members of the Congress and get pretty much whatever he wants in the tax code. 'I know our complex tax laws better than anyone,' President Trump said, 'anyone who's ever run for president and I'm the only one who can fix them.'

"There is every reason why in terms of its work in tax and the fact that we are considering major tax legislation that we [as Ways and Means members] would want to know whether he will benefit personally and that's why he's advancing these various legislative changes."

Broken tax pledge: And Rep. Joseph Crowley (D-New York) took the president to task for misleading the American people regarding his returns. It's time for Trump to do what he pledged to do during the campaign, which is to release his tax returns, said the New York City Representative.

Now that the election is over, added Crowley, he's said he no longer has to hand over his tax returns because he's president. "That's right. He's president and we're not. We get that," said Crowley, his voice indicating a frustration that was felt by other Ways and Means' members during what at times was a contentious 2½-hour hearing. You can watch the full session on YouTube.

In the end, though, the result was the same as two other Democratic attempts. Republicans voted to report the resolution "unfavorably" to prevent it from going to the full House floor for consideration.

Will there be a fourth try to get Trump's tax returns? Or, as Doggett said, is it clear that the Ways and Means committee has struck out on this issue?

Following the committee's vote, Pascrell vowed to "continue to make the case until Mr. Trump's returns see the light of day."

Do you still want to see Trumps taxes? Do you have questions about how any proposed tax code changes will affect and/or benefit the president, his family and his business? Or is it time to let the tax return quest go?