Donald J. Trump got an early, though not unexpected, Valentine's Day gift from the head of Congress' chief tax-writing committee.

House Ways and Means Committee Chairman Rep. Kevin Brady (R-Texas) on Feb. 13 rejected a maneuver by a Democratic member of that committee to get a look at a decade's worth of Trump's 1040s. 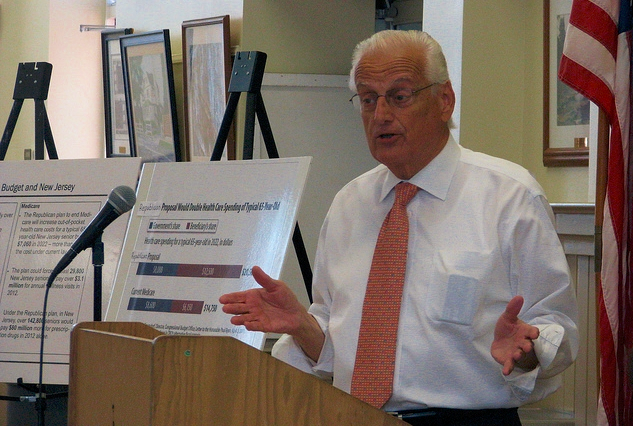 The full House tax-writing committee followed the chair's lead and made it official on Valentine's Day. By a 23-15 party-line vote, Republicans decided to not request Trump's tax returns.

That's got to endear the tax-writing Texan who leads the panel to The Donald. Brady might want to check his snail mail box for a combined Thank You/Valentine's Day card bearing a White House postmark.

NJ Rep.'s request shot down: Brady action was in reply to a request by another member of the House Ways and Means Committee to use an esoteric tax law to get a look at the new president's returns.

Rep. Bill Pascrell, Jr. (D-New Jersey) sent a letter on Feb. 1 to his W&M colleague, asking the chairman to submit a formal request to the Treasury Secretary (now the just-confirmed Steven Mnuchin) for the 45th president's tax returns for each of the past 10 years.

Pascrell's concern, shared by many across the country, is that Trump is not sufficiently separated from his many international business interests.

The New Jersey legislator, according to his letter, believes the tax filings would help shed light on Trump's "564 financial positions in domestic and foreign companies" and the involvement of foreign, state-owned enterprises in existing and/or proposed Trump businesses.

Emoluments concerns: That the new Commander in Chief is making money from foreign entities could be a violation of the U.S. Constitution's emoluments clause, according to Pascrell's letter. It's a concern shared by many on Capitol Hill and elsewhere.

Pascrell specifically cites the emoluments provision, which is found in Article I of the Constitution.

"No Title of Nobility shall be granted by the United States: And no Person holding any Office of Profit or Trust under them, shall, without the Consent of the Congress, accept of any present, Emolument, Office, or Title, of any kind whatever, from any King, Prince, or foreign State."

Last month, Citizens for Responsibility and Ethics in Washington, filed a lawsuit against Trump, arguing that the emoluments clause prohibits Trump-owned businesses (like his hotel down Pennsylvania Avenue from the White House) from accepting payments from foreign governments (or its emissaries who stay at the hotel).

That's one of the reasons Pascrell wants to see Trump's federal tax returns.

"The Presidential campaign is over and the fear that a political opponent will try to use tax returns for electoral benefit is passed," wrote Pascrell to Brady. "President Trump is now governing while also owning a business with international investments. The Constitution faces unprecedented threats due to this arrangement. I believe the powerful Ways and Means Committee has the responsibility to use that power to ensure proper oversight of the executive branch by requesting a review of President Trump’s tax returns."

A glimpse beyond Congress: Pascrell says the Ways and Means Committee, on which he serves, is entitled by a section of the Internal Revenue Code to review a president's tax filings.

The law, enacted in 1924, has been used only once. That was in 1974, when the chairmen of the House Ways and Means and Senate Finance Committees reviewed then-President Richard M. Nixon's returns.

In that same vein, the New Jersey lawmaker wants to examine, along with his colleagues on the Congressional tax-writing committees in closed executive session, 10 years of Trump filings, along with all accompanying return information.

"I further request that the Committee then vote in this closed session to submit the President's federal tax returns to the House of Representatives — thereby, if successful, making them available to the public," wrote Pascrell.

Good luck with that, Congressman.

"If Congress begins to use its powers to rummage around in the tax returns of the President, what prevents Congress from doing the same to average Americans?" said Brady. "Privacy and civil liberties are still important rights in this country and the Ways and Means Committee is not going to start to weaken them."

Privacy prevails: Even though Brady is a fellow Texan, I don't usually agree with him. This time, I do. To a degree.

First, a look at where Brady and I see eye-to-eye.

Tax privacy is critical. And the president of the United States is, like you and me, a taxpayer. As such, he (or one day, she) should be afforded the rights and considerations every American shares in dealing with the Internal Revenue Service.

But as president, things change.

Voters, whom Trump refused to show his returns, should be assured that the candidates they are asked to choose from do follow the tax laws. Trump broke this informal sharing of tax returns, a tradition that had spanned 40 years, when he used the excuse of an ongoing audit to keep his filings secret.

Since the election, Trump's maintained his position of go ahead and ask, but I still won't tell.

That, however, has only raised more questions about what's on his returns.

He could assuage some of the curiosity and, more importantly, concern by letting the members of the tax-writing committees see his filings.

If there's nothing to see as Trump keeps saying, then a closed, bipartisan examination of the forms and substantiating documents would confirm that.

Protecting taxpayers, too: But, if there is something questionable there, that too could come to lawmakers' attention. It is in all U.S. citizens' best interest to know that our leaders are complying with the same laws they ask us to follow.

Letting a limited group of legislators, those whose jobs are to deal with tax legislation, see the president's tax returns would be a good way to ensure that this law-abiding pact is kept.

So while I agree with Brady that any and every taxpayer's right to tax privacy should not be violated, letting a select group of Representatives and Senators see the returns of the president, who serves at the pleasure of voters, would not undermine that privacy.

The members of Congress then could decide, if warranted, how best to proceed. That wouldn't necessarily be by fully exposing Trump's taxes to the general public.

And as much as I'd love to look at Trump's 1040s, if there is no wrongdoing indicated in the documents, I don't think Congress should make them public as Pascrell suggests might happen. Again, that is each individual taxpayer's choice as to how to handle his or her returns.

But at least, Mr. Trump, let someone outside your circle see what you've put on your taxes.

Policy over politics: And here's where I agree with the undeterred Pascrell.

"I hoped and still hope that my friend Kevin Brady will put country over party. This isn't a partisan issue," the Garden State lawmaker said after Brady turned down his request. "The American people want to understand the full scope of the President's business interests and be assured that he is not taking foreign emoluments as outlawed by our Constitution."

Pascrell also vowed to continue "pressing this issue as long as the President's business interests continue to present potential conflicts for America."

Good for you, sir.

If at least you and your Ways and Means Committee members can find out what's in Trump's taxes, then I, the majority of Americans questioned in a recent poll and the hundreds of thousands who have signed the We the People petition asking to see 45's returns will feel a tiny bit more confident that Oval Office decisions are based on policy, not income, considerations.