Neil Gorsuch, a federal appellate judge on the United States Court of Appeals for the 10th Circuit, has been selected by President Donald Trump to fill the U.S. Supreme Court vacancy left last year by the death of Antonin Scalia. 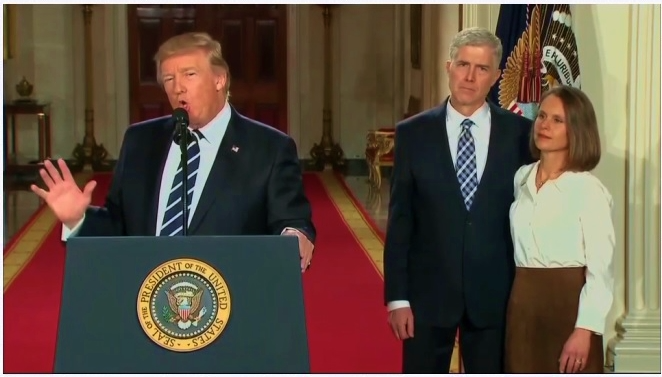 President Donald Trump explains why he chose Neil Gorsuch, at right with his wife Marie Louise, to server on the U.S. Supreme Court.

Gorsuch, 49, an Ivy Leaguer from Colorado, has a conservative judicial track record.

He also formerly clerked for two Supreme Court justices, Byron White and Anthony Kennedy. If Gorsuch is confirmed, which is expected given that the Republicans control the Senate and the process to OK Trump's pick, the newest justice will sit alongside his former boss Kennedy.

The past is no positive predictor: So what do we know about how Gorsuch might decide, especially when it comes to tax cases that could make it to the land's highest court?

It's hard to predict what a judge might rule based solely on past decisions. Many on the political right, for example, were stunned when Chief Justice John Roberts was the key in deciding the tax matter that let the Affordable Care Act, aka Obamacare, stand.

But a case that could have a major tax impact on all of us who shop online -- and anymore, that's most of us -- was once before Gorsuch.

Gorsuch's opinion on online sales taxes: Gorsuch concurred with a unanimous three-judge panel late last summer that upheld a Colorado law that requires online retailers who do not have a physical presence in the state to notify their customers what they owe in taxes.

This so-called tattle-tale tax has been copied by other states, most recently Louisiana. Following that legislative effort, the world's largest online retailer, Amazon, decided to start collecting on Jan. 1 sales tax from customers in the Pelican State rather than simply -- or not so simply in the company's view -- keep track of the buyers and inform them of their state sales tax obligations.

Sales tax cases headed to SCOTUS: The Supreme Court last December declined to hear a challenge to the Rocky Mountain state's law, so the case won't pose any conflict of interest issue for Gorsuch if/when he dons the robe.

But other internet/online sales tax cases are still working their way through the judicial system, most notably one from South Dakota.

As I noted in my 2016 tax year review/2017 tax year preview post last month, a growing number of states have adopted or are expect to approve creative nexus standards challenging the existing 1992 Quill Corporation v. North Dakota case. The Supreme Court of the United States (SCOTUS) ruling there set the interstate sales tax rules we've been, until recently, following.

Quill says that a seller must have a physical presence, or nexus, before it has to collect a state's sales taxes.

But the explosive growth of internet commerce, argue many officials in cash-strapped states, has undermined that standard. And even Amazon seems to agree, expanding its sales tax collection efforts to 35 states and the District of Columbia even though, for now, it has no physical operations.

Court action likely before Capitol Hill measure: Congress has been struggling with developing a nationwide law to deal with interstate remote sales and just how states should be compensated for the taxes on the products. But given the delay such legislation already has encountered, it's quite likely SCOTUS could decide the matter before Representatives and Senators get around to doing their jobs it.

And Gorsuch could be part of changing the face of online sales tax collection if, after he takes his SCOTUS seat, the court hears other cases that seem headed to the nation's top bench.

In fact, the SCOTUS ultimately could decide to end the nexus requirement in a wonderfully tax ironic way if a majority of the justices hear South Dakota's new internet tax collection law and decide in a way that reverses neighboring North Dakota's long-standing remote sales physical location standard.

The Colorado remote sales tax is one of what Politico calls the five key cases to understanding Neil Gorsuch. Check out the article.

And keep an eye on Gorsuch's confirmation hearing. Given the current political climate -- Trump has told Senate Majority Leader Mitch McConnell to "go nuclear" if needed to get Gorsuch approved -- it should be lively.