Donald Trump said during the presidential campaign that America's voters didn't care about his taxes. He wishes. 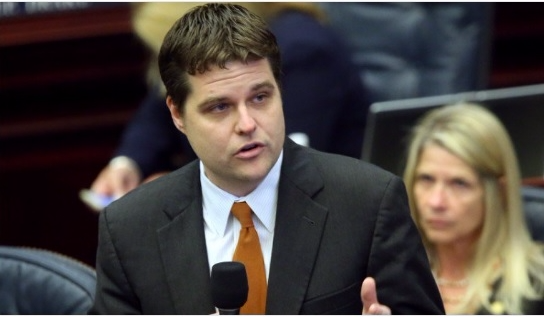 After hearing from angry constituents during a town hall meeting on Feb. 23, Rep. Matt Gaetz (R-Florida) now says the president should release his tax returns. A GOP Senator says Russian hacking investigations could lead to just that. (Image from CNN Twitter post)

Although the 45th president is the first presidential politician in almost 40 years to keep his Internal Revenue Service filings secret, folks remain curious as to what's on Trump's 1040s.

'We the People' and real people: The first petition filed at the White House's "We the People" web page after Trump took office has been e-signed by more than 1 million people.

During this week's Presidents Day break, some members of Congress who dared to hold town hall meetings with their constituents also were heard chants of "tax returns" from the crowds. 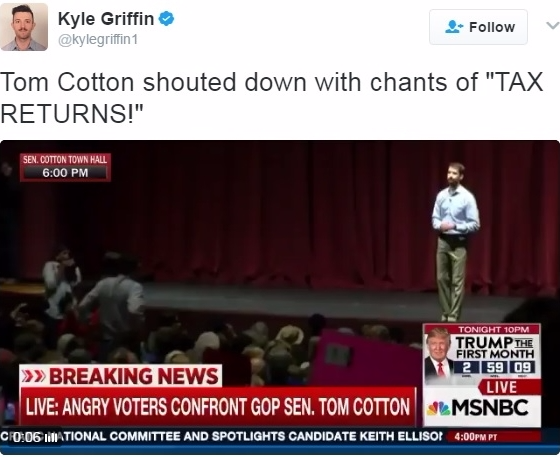 Arkansas Sen. Tom Cotton was greeted during a town hall meeting on Feb. 22 with calls for Trump to release his tax returns. (Image courtesy Kyle Griffin/MSNBC Twitter post; click image to watch a GIF of the exchange.)

Such interactions prompted at least one Trump supporter, GOP Rep. Matt Gaetz, to join the chorus.

In addition, Collins said she and her colleagues could demand Trump's tax returns to see if they reveal any of his or his companies' business dealings in Russia.

"If it's necessary to get to the answers, then I suspect we would," Collins said Wednesday, Feb. 22, when asked about Trump's taxes during an appearance on the public radio program Maine Calling.

Myriad inquiries: In addition to the Senate Intelligence investigation, the Upper Chamber's Judiciary Subcommittee on Crime and Terrorism has launched a separate probe into Russia's election hacking.

Senate Armed Services Committee Chairman John McCain (R-Arizona) also plans an investigation into how best to deter and counteract cyberthreats posed by countries such as Russia.

The Republican-led House also has its own formal inquiry, led by the House Intelligence Committee members.

However, House GOP leaders have so far resisted a call by mostly Democrats for an independent bipartisan commission to investigate the Kremlin connection.

But that could change if the various examinations start uncovering substantive information about Russia's involvement in the 2016 presidential campaign.

And while the tax-writing House Ways and Means Committee earlier this month rejected an option that would let those members (and possibly the public) see Trump's taxes, the filings could be a by-product of all the Russia investigations.