It's Groundhog Day and for many folks that brings to mind the Bill Murray movie of the same name more than the Pennsylvania rodent who purportedly can forecast weather.

In case you haven't seen it, in the 1993 Harold Ramis movie Murray is a television weatherman who, after being dispatched to Punxsutawney, Pennsylvania, on Feb. 2 to cover groundhog Punxsutawney Phil's emergence from his burrow, finds himself living the same day over and over and over again.

Murray's character Phil (we see what you did there, movie makers) is the only person in his world who knows this is happening. The movie has become pop culture shorthand for finding yourself doing the same thing over and over and over.

Groundhog Day tax scam repeats: That's the feeling taxpayers are getting this week as the Internal Revenue Service has started issuing announcements of the scams that make the agency's 2017 Dirty Dozen list.

The Dirty Dozen is the annual compilation of the 12 worst and/or most prevalent scams and cons perpetrated upon taxpayers.

As it did last year, the IRS is releasing the 12 scams separately. So far, two have been identified.

Phishing still reeling in victims: Fake emails or websites still are a major tactic of crooks looking to steal personal and tax information, so much so that the IRS put these phishing schemes on the latest list of Dirty Dozen tax scams.

The IRS says it saw a big spike in phishing and malware incidents during the 2016 tax season. And already this year, new and evolving phishing schemes have appeared as scammers try to confuse taxpayers during filing season.

Email schemes in recent weeks have targeted tax professionals, schools, payroll and human resources personnel, schools and all of us plain old taxpayers.

Typically, criminals pose as a person or organization the taxpayer trusts or recognizes. To this end, they may hack an email account and send mass emails under another person's name or pose as a bank, credit card company, tax software provider or government agency.

Criminals also go to great lengths to create websites that appear legitimate but contain phony log-in pages. Once there, the aim is to get victims to provide passwords, Social Security numbers and other information that can lead to identity theft.

Even if you don't enter your tax or other personal info, scam emails and websites can infect victims' computers with malware without the user knowing it. This can give the criminal access to the device, enabling them to access sensitive files or track keyboard strokes, exposing login information.

"These email schemes continue to evolve and can fool even the most cautious person. Email messages can look like they come from the IRS or others in the tax community," notes IRS Commissioner John Koskinen. "Taxpayers should avoid opening surprise emails or clicking on web links claiming to be from the IRS. Don't be fooled by unexpected emails about big refunds, tax bills or requesting personal information. That's not how the IRS communicates with taxpayers."

Not IRS calling: Then there's the persistent telephone tax scam. Although a raid at an Indian call center last year put a dent in this scam, the IRS says it remains a major threat to taxpayers.

During filing season, the IRS generally sees a surge in scam phone calls in which criminals impersonating IRS agents make aggressive and threatening phone calls to potential victims. I've gotten more than half a dozen of them.

The fake tax agents typically threaten police arrest, deportation, license revocation and other things if the call recipient doesn't send payment, usually on a prepaid card, for a fake overdue tax bill. Others fake IRS agents try the carrot, saying that if you can prove who you are by providing personal and tax date, they will send you a tax refund that you are due.

"Don't be fooled by surprise phone calls by criminals impersonating IRS agents with threats or promises of a big refund if you provide them with your private information," says Koskinen. "If you're surprised to get a call from the IRS, it almost certainly isn't the real IRS. We generally initially contact taxpayers by mail."

Scams ahead: Judging from these fist two items on the 2017 Dirty Dozen tax scams list, it likely will look a whole lot like last year's version.

Don't be a scam victim: The bottom line to beating tax identity thieves this year is the same as it was last year.

Be skeptical. Don't take a caller's word for any tax claim.

Don't reply to any calls or emails about taxes without first confirming that the communique came from a legitimate source.

Contact the IRS directly if you think you might owe taxes. It's better to get out in front of an overdue tax bill and make arrangements to pay Uncle Sam rather than fall for a crook's line and send him the money instead.

Today's Daily Tax Tip also has some advice on how you can protect your tax identity.

Finally, keep reading the ol' blog. As the IRS releases the rest of its 2017 Dirty Dozen tax scams, I'll post them here.

Weather scam: One final rant here, this one about that large ground squirrel up in Pennsylvania. I am holding the critter personally responsible for the 30-degree temperature difference today. 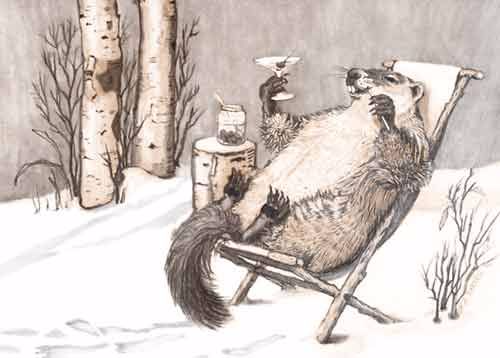 Chilling with a martini is probably as effective a use of the groundhog's time as trying to get the animal to predict the weather! (Photo from Groundhog Greetings Pinterest board)

We went from 83 degrees yesterday here in Central Texas, to the 50s today. I want my warm weather back!

And it's all a scam anyway. With all the TV cameras surrounding him, Punxsutawney Phil is always going to see a shadow, either his or one of his handler's.

Plus, as Murray's movie character Phil notes, we usually have another six weeks of winter anyway, with or without the early February faux forecasting foofaraw.