Oh, c'mon people! What is so hard about hiring a legal household worker and then paying the proper taxes for such help? 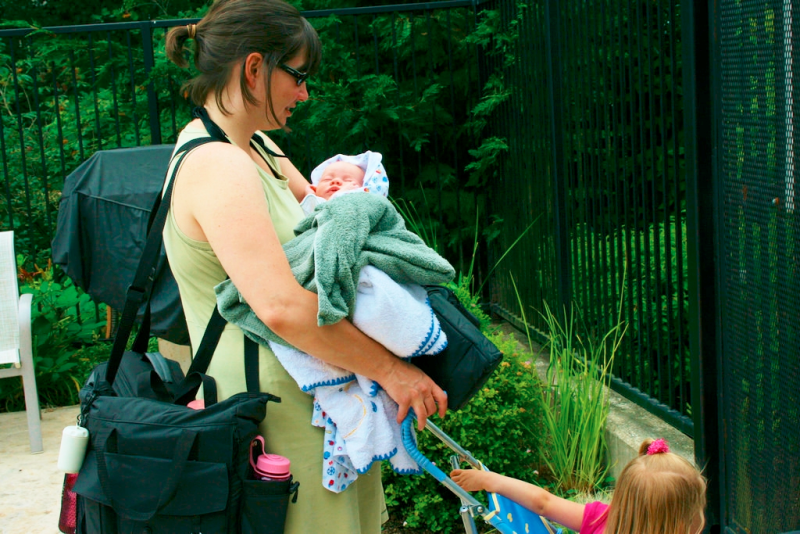 Mother with a baby and toddler hauling, in her words, "a lot of crap." If she hires childcare help, she'll need to pay attention to nanny tax rules. (Photo by Mrs. Flinger via Flickr Creative Commons)

However, some high-power folks with political aspirations apparently cannot get this right.

Not even three weeks into the Trump Administration and we have a second nanny tax scofflaw.

Puzder joins Mulvaney with household help issues: First there was the South Carolina Republican lawmaker Trump tapped to serve as his budget chief.

Rep. Mick Mulvaney's admitted that he didn't pay $15,000 in Federal Insurance Contributions Act, or FICA, taxes, as well as federal and state unemployment taxes, for a household employee between 2000 and 2004.

Now we learn that Andrew "Andy" Puzder, the fast-food restaurant chief executive nominated to be Labor Secretary, hired an undocumented household employee and didn't pay proper taxes for the work.

The tax is popularly called the nanny tax, but it applies to all household help.

Political fallout, but still on track: Given that Republicans control the Senate, the hiring and nanny tax oversight likely won't prevent Puzder from taking his cabinet spot.

But it will no doubt get a lot of comment from his and Trump's opponents.

Puzder, who has headed CKE Restaurants, the parent company of Hardee's and Carl's Jr., since September 2000, has been slammed by unions and political opponents for his management role and employment positions at the fast food chain. Puzder was an outspoken critic of worker protections enacted by the Obama Administration and opposes a federal minimum wage increase.

As for his housekeeping hiring and tax troubles, Puzder notified his potential new boss and the White House released a statement from Puzder:

"My wife and I employed a housekeeper for a few years, during which I was unaware that she was not legally permitted to work in the U.S. When I learned of her status, we immediately ended her employment and offered her assistance in getting legal status. We have fully paid back taxes to the IRS and the State of California and submitted all required paperwork regarding her employment."

"No" to prior nanny tax offenders: While Puzder is expected to eventually be confirmed, hiring undocumented household help has derailed previous Cabinet nominees.

Nanny tax troubles doomed the nomination in 2009 of Nancy Killefer, who had been tapped by President Obama to be the nation's first Chief Performance Officer. Her job would have been to make sure government offices operated as efficiently as possible.

Am I'm taking it a bit too personal that these previous Cabinet nominees who ran afoul of the nanny tax and weren't confirmed were all women?

Regardless of your gender -- or high-level political aspirations -- check out today's Daily Tax Tip, which discusses complying with the nanny tax rules.