The Internal Revenue Service would really, really like if all of us would use tax software to prepare and e-file our taxes. It even gives around 70 percent of filers the chance to do so for free at the aptly named Free File section of the IRS website.

But a lot of taxpayers who qualify for Free File decide instead to pay a tax pro to file their returns, according to a new survey by NerdWallet.

Tax pros preferred: More than 1 in 3 taxpayers, or 38 percent, who make less than $50,000 annually hired a tax professional, according to the personal finance website. For the 2017 filing season, if your 2016 adjusted gross income is $64,000 or less, you can use Free File.

Twenty-six percent went to an accountant, while another 12 percent headed to a national tax preparation company.

While that obviously cost them some money, the choice to seek professional tax hiring help might have been a good idea.

Actually, it was more blunt.

Failing tax grades: Most taxpayers get failing marks for their tax knowledge.

Out of eight questions about IRS rules for common deductions, retirement and education savings plans, only a quarter of the surveyed taxpayers correctly answered the questions.

Breaking down the failing grades, the NerdWallet poll found that nearly half of taxpayers (46 percent) don’t know into what tax bracket their income falls. Seven percent didn't even know what a tax bracket is.

Another 57 percent, or nearly three in five taxpayers, don’t know what a W-4 is. 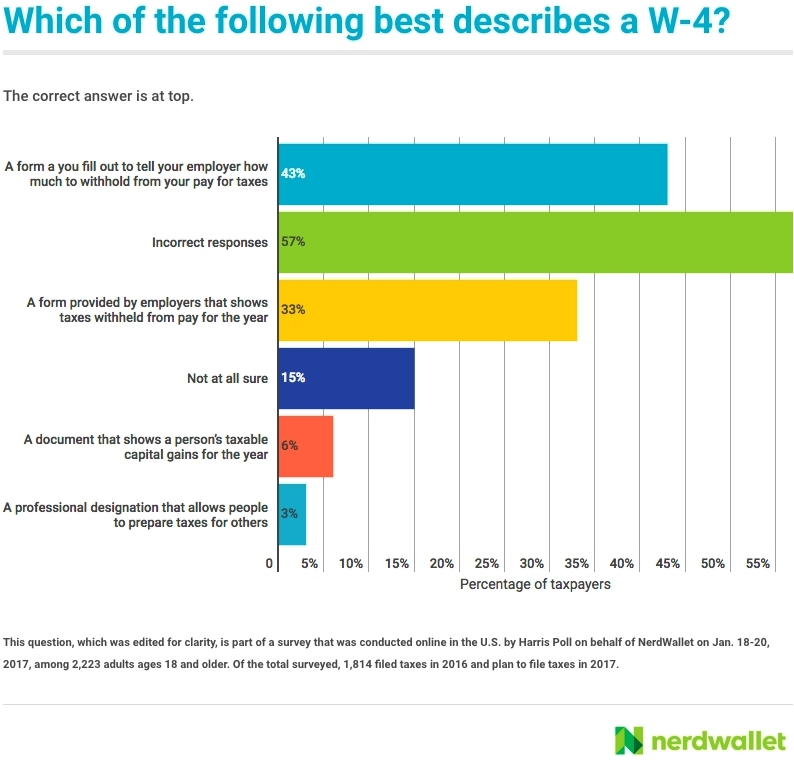 Even more, 59 percent, don’t know that deadline this year for making a tax-deductible contribution to a traditional individual retirement account is April 18.

Experience obviously doesn't matter: And yes, the survey group was more than 1,800 adults across the United States who filed income taxes last year and plan to do so again this year. Obviously, they didn't learn from last year.

And obviously, no Don't Mess With Taxes readers participated in the poll!

Seriously, though, such lack of tax knowledge is disconcerting. I know that that are, relatively speaking, very few of us tax geeks out there.

I'm also glad that those who know they are woefully short on tax understanding come here and to other reputable personal finance and tax sites for help and/or head to a tax professional.

And there is one final silver lining.

Such a shortage of tax facts -- real, not fake ones! -- bodes well for my continued employment.

But honestly, folks, I'd be happy for the day when everyone feels confident and comfortable about taxes. Hey, I want to retire some day!

You can read more about NerdWallet's findings in its story on the poll. (Full disclosure: I freelance for the site, but this piece was by NerdWallet's Kevin Voight.)