Watch out for the Dirty Dozen tax scams of 2017

Sound familiar? It should. 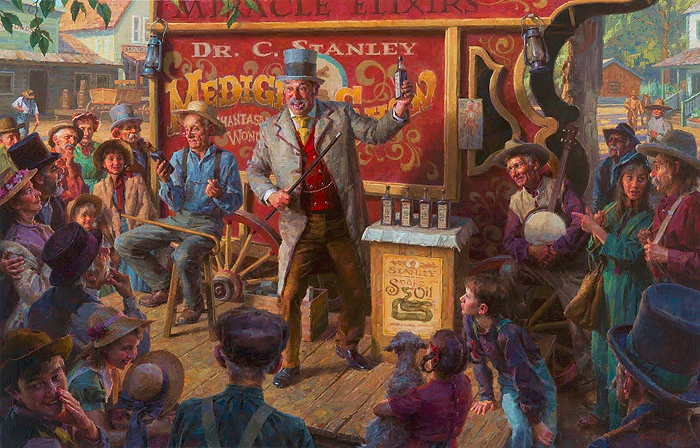 Today's tax con artists are the modern day equivalent of yesteryear's snake oil salesmen, hustlers who convinced folks to buy products that could not possibly work as advertised. In all cases, past and present, the victims end up losing their money. ("The Snake Oil Salesman" by Morgan Weistling is available for purchase at Artifacts Gallery. The link to the artwork is not a paid endorsement.)

As I noted back on Groundhog's Day when the IRS started parceling out its yearly collection of the worst of tax-related crimes, this year's list started off with a definite déjà vu feel.

In fact, all the scams from 2016 made the 2017 list. Unfortunately, that staying power makes 12 this week's By the Numbers winner.

Retouching old scams: This year, as it did in 2015 and 2016, the IRS released its Dirty Dozen list in separate announcements over almost two weeks. That allowed the agency to elaborate in each news release on the tax-related criminal activity.

And while the general schemes have been disturbingly consistent, tax crooks have tweaked them somewhat from year to year.

"Taxpayers can and should stay alert to new schemes which seem to constantly evolve," warns IRS Commissioner John Koskinen. "We urge them to do all they can to avoid these pitfalls – whether old or new."

For 2017, here's the IRS' consolidated list, in the order in which they were announced, of the 12 worst tax scams, along with a summary of each.

Don't be a scam victim: Knowing what to look out for is just the first step. Tax criminals are canny, cunning and creative. But you can beat them.

First, be skeptical. Don't take a caller's word for any tax claim.

Second, don't reply to any calls or emails about taxes without first confirming that the communique came from a legitimate source.

Finally, go to the tax source. If you think you might owe taxes, call the IRS directly yourself. It's better to get out in front of an overdue tax bill and make arrangements to pay Uncle Sam rather than fall for a crook's con and send him the money instead.

Good luck this tax season, in not only accurately filing your 1040, but also in avoiding all of this year's Dirty Dozen tax scams.