Super Bowl LI will kick off in a few hours. Get your guacamole made and place your bets!

I obviously don't need to encourage folks to chow down or gamble on Super Bowl Sunday. Every year, it's the single largest day for U.S. avocado consumption and for betting. 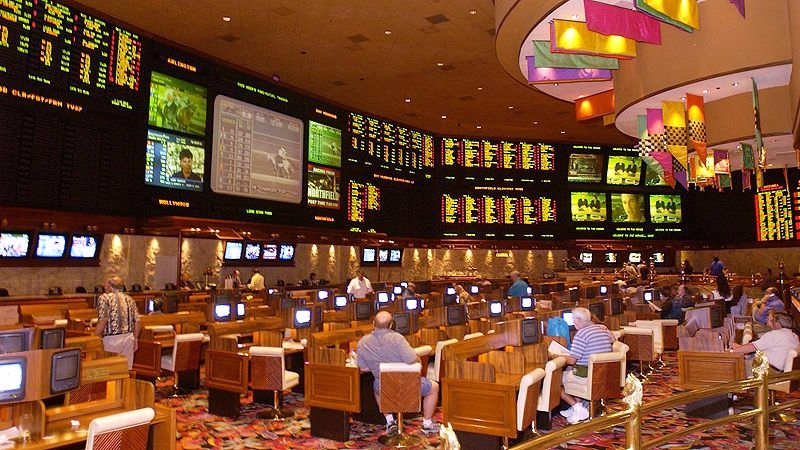 Yes, I've wandered through the betting section of a couple of Las Vegas casinos, but usually confine my money losing to the one-armed bandits.

Last year, according to the Nevada Gaming Commission, a record $132.5 million in total bets were placed on the Super Bowl. Remember, these were legal bets made in the only state where sports wagering is allowed.

This year, the American Gaming Association (AGA) estimates that American's will wager $4.7 billion on the match-up of the New England Patriots and Atlanta Falcons and prop bets on sort-of game-related events.

Illegal bets outnumber legal wagers: But the vast majority of that money, notes the AGA, will be illegally placed bets made via offshore sportsbooks and bookmakers.

That $4.5 billion in illegal wagers also is this Super Bowl week's By the Numbers figure. 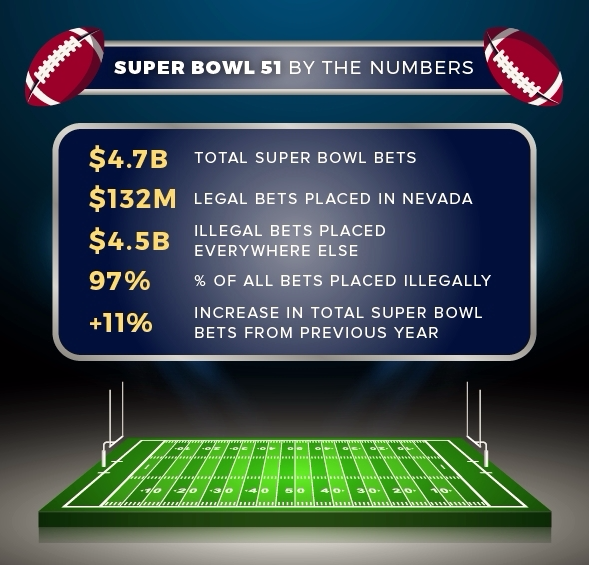 The AGA is talking about, and calling for the end of, the Professional and Amateur Sports Protection Act, or PASPA, This law mandates that Nevada is the only state permitted to offer traditional sports betting. Even betting on the Olympics has returned to the Silver State.

Ever-growing illegal betting: But gamblers, in growing numbers and much to the chagrin of lawmakers, have found ways around the prohibition.

The AGA says despite the ban, sports betting has only increased. In 2016 alone, says the AGA, Americans wagered an estimated $154 billion on all sports, nearly all of it through bookies and illicit offshore web sites.

"As we mark the 25th anniversary of a failed law, it's time for Washington to get out of the way and lift the federal prohibition that pushes sports fans to a rapidly growing illegal betting market," said Geoff Freeman, president and CEO of the AGA, in a statement announcing the Super Bowl gambling data.

"A regulated marketplace would generate tax revenue and jobs, protect consumers and leverage cutting-edge technology to strengthen the integrity of the games we all love," said Freeman.

Regulation would protect sports' outcomes: As for the fear that nationwide gambling would affect the integrity of sports and games outcomes -- insert Black Sox scandal comments here -- Freeman cited a 2016 United Kingdom (where gambling is legal) study.

The report's findings are evident in its title, "The Key to Sports Integrity in the United States: Legalized, Regulated Sports Betting."

The pair suggests that to effectively "choke-of black market gambling and preserve and protect the integrity of sports, America should implement a sound and robust regulatory framework to legalize sports betting, drawing on the experience of mature gaming markets, such as Great Britain."

Some tentative steps have been taken over the years in that direction. And, notes Freeman, more groups are calling for the end of the ban:

The National Conference of State Legislatures and U.S. Conference of Mayors have strongly urged regulation of sports betting. Pennsylvania passed a resolution last year opposing PASPA. New York is working on similar legislation. Several other states filed amicus briefs in New Jersey's appeal to the Supreme Court, echoing the Garden State's desire to offer sports betting within their borders. In addition, the NBA and PGA Tour have signaled a willingness to take a fresh approach to sports betting.

If you've placed a bet, I hope it was legal. So does the Internal Revenue Service, since those betting options are the only ones through which the tax agency can be assured that it gets its tax cut.

But even if your bet (probably) wasn't at a legal sportsbook, if it pays off, remember that all gambling proceeds regardless of how obtained are taxable income.

The IRS wishes you luck and appreciates your commitment to following U.S. tax laws.