Whenever I want to escape the crazy that is real life, I turn to the movies. Sometimes it's my favorite tax-themed films. 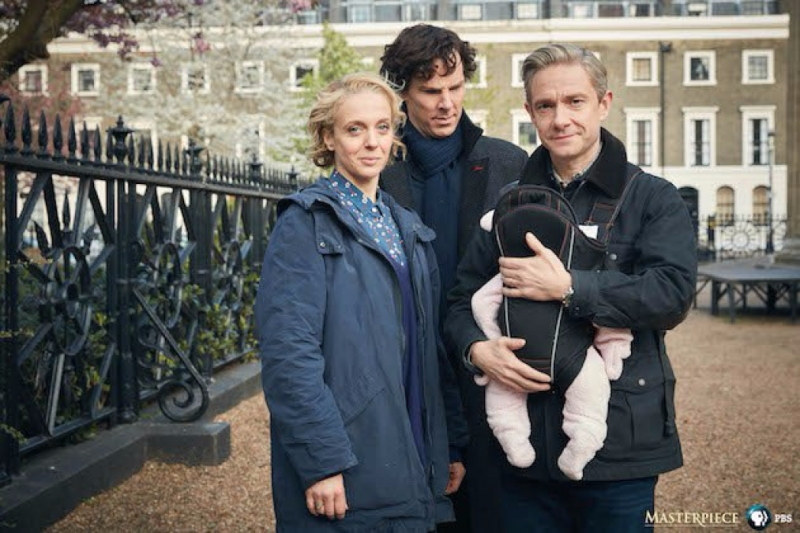 Amanda Abbington and Martin Freeman, pictured here on the set of "Sherlock" with Benedict Cumberbatch, who plays the show's title character behind them, have separated. (Photo courtesy PBS Masterpiece)

Other times when I can't get away for a couple of hours, I surf entertainment news. Go ahead, judge me. Then admit you've done the same!

In perusing the web recently, I stumbled across a list of celebrity couples who have split.

In addition to the usual Brangelina and Johnny Depp/Amber Heard breakup deets, I made a terrible discovery.

Dr. John Watson and his wife Mary Morstan are splitsville.

Unsolvable marital mystery: OK, you caught me. In the "Sherlock" series that airs on PBS in the United States, Mary — spoiler alert — is dead.

But actor Martin Freeman, who portrays Watson, and his real-life wife Amada Abbington, who had the Mary role, have separated.

I obviously do not know either actor personally, but this makes me sad. I've loved Freeman since he was Tim Canterbury in the U.K. original "The Office." And as a wife who has worked with my hubby, I enjoyed the interaction of Freeman and Abbington in "Sherlock."

The couple is British, but their personal marital travails obviously got me thinking about U.S. married couples and how their relationship status affects their tax filing. Yeah, you caught me again, the true romantic!

Most of the time, it's better to file one return jointly. But there is another option, married filing separately, that could be called for in certain marital situations.

Married couple filing options: If you're legally married at the end of a tax year — that's Dec. 31 — then you and your spouse have the choice of filing one federal joint tax return or each of you submitting a married filing separately.

1. One spouse has a lot, a whole lot, of income. Many well-to-do couples already have to deal with the top ordinary tax rate of 39.6 percent. But since 2013, some high-income taxpayers also have faced surtaxes. These were not changed by the Tax Cuts and Jobs Act (TCJA). This means jointly filing married couples with a combined wages of more than $250,000 in wages have to pay a 0.9 percent added Medicare tax, as well as a 3.8 percent tax on most investment income. Plus, there's the higher capital gains rate — 20 percent instead of 15 percent — for joint filers making $479,001 more in 2018 (it was — for filers on extension — $470,701 or more in 2017). Determining whether splitting your wages and investment income and filing separate returns is worth it tax wise will take some work. But if you're making big bucks, you probably have a tax professional who can run the numbers for you.

2. One spouse has a lot, a whole lot, of medical expenses. If you're younger than 65, in order to educt medical expenditures as an itemized expense on Schedule A, the doctor etc. costs must exceed 10 percent of your income (that percentage remains in place under the new tax law for 2017 and 2018 tax years). If a husband or wife has enough costs to offset his or her separate earnings, it might be worth splitting your tax returns so that the ailing (and hopefully feeling better) spouse can deduct them.

3. Many miscellaneous deductions. Like medical expenses, miscellaneous deductions must meet a percentage of adjusted income threshold. In this case, it's 2 percent. But, and this is a big but, this tax deduction ends for tax years 2018 through 2025 under the TCJA. If you extended your 2017 tax filing deadline until Oct. 15, you still have a variety of work-related costs can be claimed in this Schedule A section, including professional dues and fees, job-search costs and unreimbursed business expenses. If one spouse has a lot of these because, for example, she traveled a lot for work or was laid off and diligently hunted for new work, filing separately against her solo income could make these costs.

6. Your relationship status. I'm not talking filing status here, but your status a la Freeman and Abbington. Just how do y'all feel about each other? Have you lost, as the song goes, that loving feeling? If you're pretty sure that you and your spouse won't be legally wed for much longer, it might be time to separate your taxes along with all your other goods.

Disclosure: Much of this blog post first appeared as a Don't Mess With Taxes item on Aug. 21, 2014.

Wow! Thanks Miss Thrifty for that actor and tax update from the United Kingdom. Hmmm. Should we have seen relationship trouble in 2013 when Martin didn't help Amanda out? Or was he just following tax adviser recommendations? Regardless, I appreciate the insight on couples' tax treatment in Great Britain. Kay

Hi Kay - did you know that here in the UK, Martin Freeman & Amanda Abbington are also known for a big tax pickle?! You couldn't make it up, could you?

Also, all the couple's major assets were in his name. Under English law, a partner's property is exempt from insolvency proceedings. The press had a field day: taxes fund our (relatively plentiful) public services and it is considered morally wrong to skip out on paying what you owe. So, as you can imagine, the perception that one of the country's biggest and richest stars was using a "legal loophole" to avoid paying tax caused much eyebrow-arching. That, and the inevitable question: why didn't he step in to help his long-term partner out? But that's another issue, I guess. ;)

In the end, he loaned her the money to pay back the taxman, and the fuss died down.