One thing that's constant every tax filing season is that people who are expecting refunds file their returns early. 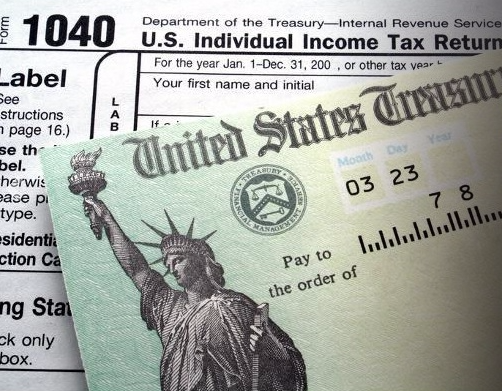 The number of tax returns filed, processed and refunds issued are all down dramatically this filing season. The impact of a required hold on some refunds also is affecting the average check amount, which at this point last year was $3,385 but is just $1,994 so far into 2017.

Internal Revenue Service data so far this filing season, which officially started Jan. 23, shows a dramatic decrease in the number of tax returns the agency has received and processed.

That means that the issuance this year of those highly anticipated tax refunds also has dropped.

This law, officially titled the Preventing Americans from Tax Hikes Act, requires the IRS to hold refunds involving the Earned Income Tax Credit (EITC) and Additional Child Tax Credit (ACTC) until at least Feb. 15. Realistically, this means that most of those checks or direct deposits won't be issued until the end of the month.

Many taxpayers who claim these credits, says the IRS, traditionally file during the opening weeks of tax season.

So the drop in the issuance of refunds, as shown in the tables below detailing the first two weeks of the 2017 filing season, is not that surprising.

Dramatic filing, refund decreases: But the numbers, both actual and percentages, are stunning.

The first full week of filing, the IRS got and processed almost 33 percent fewer returns. 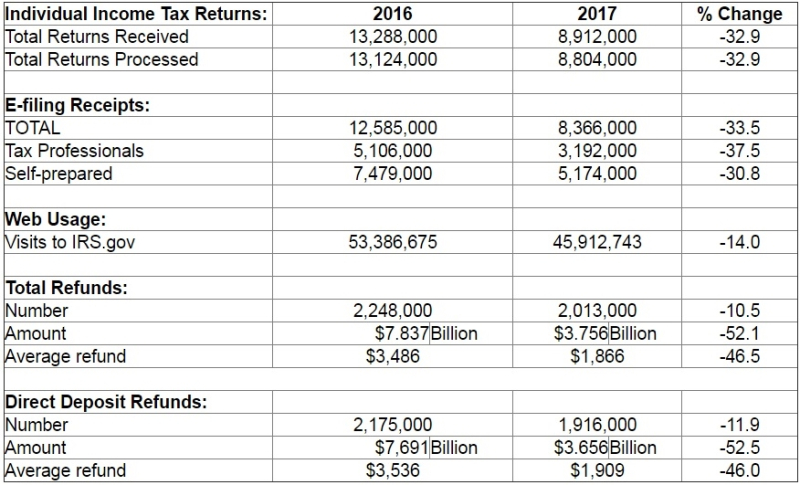 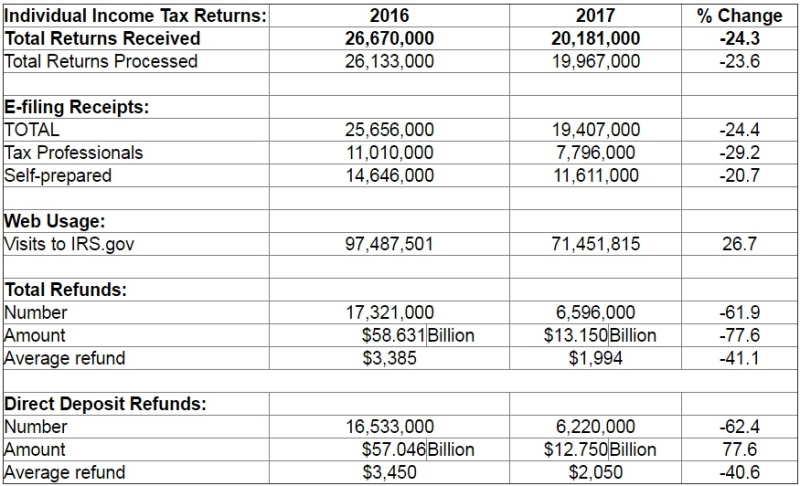 In the release of both tables, the IRS notes that "calendar year-to-year comparisons are difficult at this early point in the season as four additional days of tax return processing are included in the 2016 totals. However, when comparing the same number of days of filing, IRS is seeing an increase in returns received and accepted over 2016."

So there's hope that this year's statistics will start to catch up with 2016 filing data and eventually better it.

It's moving that direction for some categories in the Feb. 3 data. The number of returns filed and processed picked up.

But percentage-wise, refunds issued are down even more for the second week of this filing season. That line item for the week of Feb. 3 is off nearly 62 percent from the 2016 filing season, no doubt primarily because of the EITC and ACTC required refund holds.

Irked and cash-strapped filers: The early season tax return data likely means that one of my predictions for the 2017 filing season is coming true. Folks are ticked off that they haven't yet received their tax refunds.

The reason for the anger in many instances is because lots of folks depend on their tax cash. They are out of luck this year.

A recent survey by Liberty Tax Service found that 25 percent of taxpayers will face financial problems because of a delayed tax refund.

Around 43 percent of those surveyed by the tax preparation franchise said they use their refunds to pay bills.

Another 30 percent in the Liberty Tax poll said that they pay down debt with refund money.

Twenty-one percent use the tax money to buy groceries.

Broader economic effect: It's not just individual filers who will feel the economic pain of delayed refunds.

BloombergMarkets reports that a Goldman Sachs Group Inc. analysis shows that the Congressionally-mandated refund delay is likely to crimp consumer spending in February by as much as $21 billion.

Between 25 million and 30 million U.S. households, the majority of which are lower- and middle-income, are affected by the EITC and ACTC tax refund delays, according to Goldman Sachs economist Spencer Hill.

These taxpayers also are more likely to spend additional income than wealthier households, noted Hill, so this delay in getting their tax cash is likely to have an immediate and substantial negative effect on overall purchasing activity.

"Just two weeks into the tax filing season, tax return statistics from the IRS and U.S. Treasury are already showing a meaningful slowdown," Hill wrote in a Feb. 8 note to clients. "Because a significant portion of households spend their income almost immediately — due to credit constraints or other factors — the refund delay could result in a pothole in consumer spending in February."

Where's your refund? Are you among the millions of taxpayers who will be waiting longer this year for your tax refund?

If so, today's Daily Tax Tip, courtesy of the IRS, can help you get a handle on when you'll see your tax refund.

The agency has a special web page with answers to 20 frequently asked questions (FAQs) about this filing season's refunds. And yes, several of the questions and answers involve the IRS' online Where's My Refund? tracking tool.

Here's hoping you don't have to check that site too often. And that you can hang on until your refund finally arrives.

I filed on feb3 its says 21 days well they accepted it the same day...I filed single so what's going on with my refund it should be here by the 24

I filed on23 and was, accepted the same day I claim, both credits it's showing the path . And . Topic 152 its says checked after the 15 shouldn't . I've in the first batch with eic