The 2019 tax filing season has been officially underway for about a week. Millions of folks have already filed their returns. 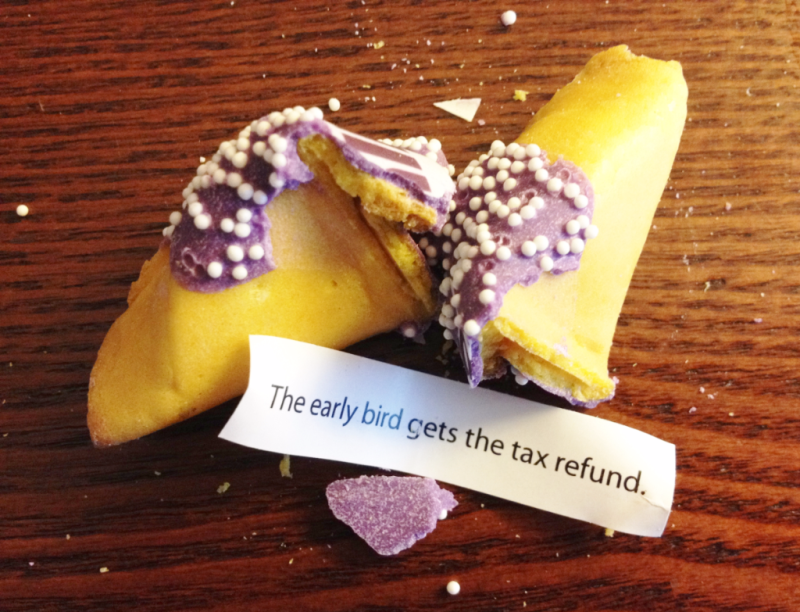 The Ally Bank fortune cookie I got at FinCon16 last September was already planning for this filing season.
And yes, after acknowledging the good tax advice, I ate the cookie!

These are, for the most part, the folks who are expecting refunds.

Some taxpayers, however, wait to file even if they are getting money back from Uncle Sam.

Form-ulaic delay: Why the delay? In a lot of cases, folks haven't yet received their W-2s, 1099s and other documents with the data necessary to fill out 1040s.

As soon as those arrive, which should be soon since Jan. 31 was the deadline for many tax statements to be sent, they'll complete their returns.

Still others will wait until mid-April (either the 15th or the 17th for some New England taxpayers) to file. A million or so, based on annual filing patterns, will push their paperwork deadline even deeper into the year by getting an extension until Oct. 15 to file their 1040 forms.

Such extended tax procrastination comes even from those who will, eventually, get refunds.

So why do we put off tax tasks? Here are three big reasons.

1. Afraid of the tax process: Fear is part of it. That's understandable. Taxes, in general, can be -- are -- scary.

A lot of us are afraid of making a mistake on our taxes. That's understandable, too.

Taxes can be complicated, even when you use tax software or hire a tax professional. And everyone, and everything, makes mistakes, including taxpayers, tax software and tax pros.

But an error or two can be corrected (yay 1040X!), either by you when you catch it early or later when the IRS finds it. It's better to get your taxes done by deadline rather than not file at all.

And fear of tax errors can breed even more errors. By putting off your tax task until the last minute, you're likely to find yourself in a rush, bringing to mind that old saying haste makes waste.

It's better to give yourself (or your tax preparer) enough time to file your return as accurately as possible than to force finish your 1040 at the very last minute.

2. No money: While it's true that some who get refunds also delay filing, most tax procrastinators owe the U.S. Treasury. If you don't have the cash to cover that tax liability, you're not going to be in a big hurry to fill out your return.

So you reason that by putting off your filing, you'll have more time to come up the money to pay your tax bill. That could be true. Or not.

If you're still short as April arrives, file by the deadline anyway and pay what you can.

Then set up a payment plan with the Internal Revenue Service to cover the rest. It's much cheaper in the long run to pay some interest on an installment plan than to face penalties for filing late or not filing at all.

3. Habits are hard to break: Some folks are just in the habit of putting off their taxes. They fully intend to do them, but later. And later it is every year.

I can see that. If you don't file until mid-April every year, you've already got that space set aside in your head and literally on your calendar to deal with your filing then.

And if you push your returns until October, the idea of doing them again early in the next year is inconceivable. You just did that a few months ago!

Justifiable document delays: Some of us have legitimate reasons for postponing tax filing.

We're waiting for tax documents we need to complete our returns. Although most of those, like the W-2 and 1099-MISC, are required to at least be on their way to taxpayers by Jan. 31, if they're sent by snail mail, it could take a week or so for them to arrive.

Other documents get even longer before they must be sent.

You need to make sure you have all your business expense receipts in order, have all the info necessary to claim your mileage and home office, and have taken advantage of your retirement plan contributions.

Extra time to add to a retirement account: While anyone with an IRA, either Roth or traditional, can contribute to that account for the previous tax year by the April filing deadline, self-employed folks have even longer.

You can open and contribute to a simplified employee pension, or SEP, retirement plan up to your return's due date, including the October filing deadline if you sought that extra time.

Not only do the extra six months give you added days to complete your 1040 and Schedule C, you also have more time to come up with the money to go into your self-employed retirement account by the later deadline.

And it definitely is worth contributing to your self-employed retirement plan, regardless of whether you do it sooner or later, for two reasons.

First, your future retirement will be better because of your contributions today to your account.

Second, money you put into your self-employed retirement plan can be deducted as an adjustment to your income. This is part of what used to be known as an above-the-line deduction on pre-Tax Cuts and Jobs Act (TCJA) returns. It and other deductions even if you don't itemize are available, but now are on the new Form 1040 Schedule 1.

If I have to come up with a $1,000 or so, I'd much rather give it to myself via my SEP-IRA contribution than to Uncle Sam as a bigger tax bill.

Procrastination solutions: Regardless of why you're putting off filing, try to understand your motivations. If they're justified, fine. Take the time you need to do your taxes right.

But if you're just screwing around because you simply don't want to file, get over it. Yes, I say that to myself, too.

Then buckle down and get your tax return to the IRS. The American Institute of CPAs has some suggestions on how to stop procrastinating.

Whatever your 1040's final result, you'll be done, at least for a while, with your taxes.