President-Elect Donald Trump is feeling charitable again. This time, it's Uncle Sam who's the target of his largesse. 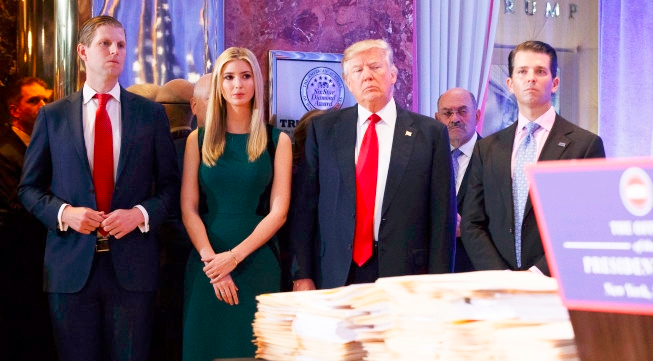 President-Elect Donald Trump and his three older children (Eric, Ivanka and Donald Jr.) get ready to meet the press this morning (Jan. 11) to discuss Trump Organization business deals after The Donald is sworn in on Jan. 20. (Photo by Evan Vicci via TPM Twitter post)

During  the almost hour-long press conference at Trump Tower in Manhattan (Trump's first Q&A with the media since July 16, 2016, when he was on the campaign trail), a tax attorney for the incoming 45th president said he will give the federal government the money paid by foreign dignitaries who stay in his hotels.

Lodging or political choice issue: This action is in response to concerns about international government officials who have made it a point since the election to stay in Trump's new Washington, D.C., hotel, which is just down the street from the White House.

"We are announcing today [Trump will] voluntarily donate all profits from foreign government payments made to his hotels to the United States Treasury. This way, it is the American people who will profit," said Sheri A. Dillon, a federal tax controversy specialist and partner in the law firm Morgan Lewis' District of Columbia office.

Some political, constitutional and ethics experts aren't so sure Trump hotel donations will sufficiently clear the standard set by the Constitution's emoluments clause, which bans acceptance of gifts from foreign leaders. We'll definitely hear more on this in the coming days, both in the media and on Capitol Hill.

UPDATE: Over on Twitter, Rob Walsh (@taxliteracy) noted the specific citing of "profits, which begs the question of how exactly are you going to calculate the expense of a room night."

That prompted Richard H. Cook (@rhc_cpa) to weigh in that "I'd bet the hotel industry has a fairly standard calculation for that."

You can bet this, as well as Trump's decision not to put all of his business interests into a blind trust as most political ethics experts have recommended, will continue to fuel debate among tax professionals and members of Congress.

Dillon, however, is confident the donation decision will pass muster.

The move, according to Dillon, is "more than what the Constitution requires," since "routine business transactions, like paying for hotel rooms" would not violate the Constitution, even when paid by foreign governments.

Anyone can donate: The decision to turn over profits from certain Trump hotel payments to Uncle Sam as a gift is not unusual. And anyone can donate to the Treasury.

Such gifts for patriotic reasons have been permitted since 1843, according to the Treasury Department. Its website notes:

Citizens who wish to make a general donation to the U.S. government may send contributions to a specific account called "Gifts to the United States." … Money deposited into this account is for general use by the federal government and can be available for budget needs. These contributions are considered an unconditional gift to the government.

Treasury’s Bureau of the Fiscal Service, which tracks such gifts, reported that $2.7 million was given in fiscal 2016.

How to give more to Uncle Sam: If you want to follow The Donald's in helping making America's bank account great again, you can send your check or money order, payable to the United States Treasury, to:

Or, if you prefer to use a credit or debit card, PayPal or make an electronic bank account transfer to help pay down the public debt, you can donate online at Pay.gov.

Deducting your debt donation: And yes, if you itemize, your gift to the Treasury counts as a charitable deduction.

Just make sure in giving to the U.S. Treasury that you follow the usual charitable giving tax rules.

And there's one final question left unanswered at today's press conference. Will Trump claim a deduction for his hotel-related gifts?

We won't know for sure until he releases his tax returns once he's in the Oval Office.

It could be a corporate tax deduction.

If the donation to the Treasury is made from The Trump Organization, LLC - can it be effectively itemized as it would on an personal income tax return? Pardon my naivete!