New on more W-2 forms this year: a verification code

Tax filing season 2017 opens today! Yes, that is cheering you're hearing. It's from folks who file their taxes early, usually because they are getting refunds.

They also are fortunate that they have all the materials they need to fill out their returns. 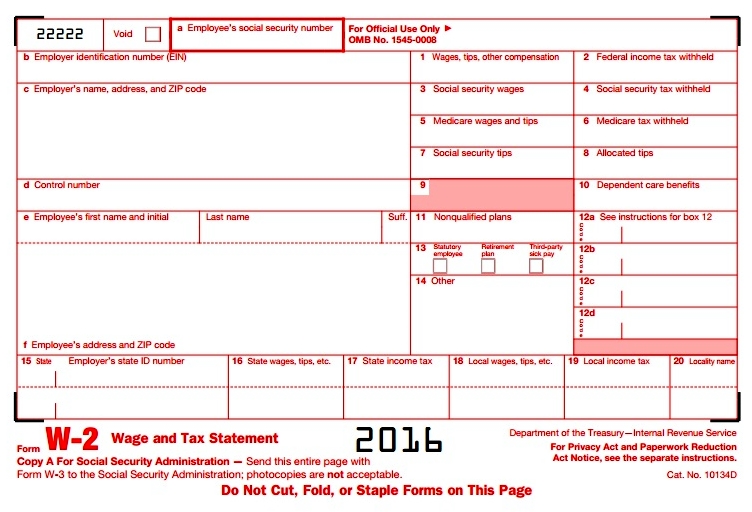 The key document for most taxpayers is their W-2 form. Employers aren't required to get these out until the end of the month, but some companies are quite efficient.

And some taxpayers this year are going to discover something new on their W-2s.

Verification code addition: Around 50 million of these officially named Wage and Income Statements will have a verification code. This is a dramatic expansion of the program, which began last year and showed up then on only about 2 million W-2s.

This 16-digit code is part of the Internal Revenue Service's continuing effort to fight tax fraud.

It is being added to more W-2s thanks to an IRS partnership with certain payroll service providers.

The IRS says that when taxpayers take the time to add the code to their returns, it will help the agency validate that they are the real filers and authenticate the income information they are submitting.

Finding the code: So where will the code appear on a W-2? It varies, says the IRS.

On some payroll firms' W-2 forms, the verification code will appear on copies B and C of the form, in a separate labeled box.

As a refresher -- it has been a year, after all, since some of us filed taxes -- your W-2's Copy B is the one with the declaration that it is "To be filed with employee's federal tax return." Copy C notes that it is "For employee's records."

But if your W-2 doesn't have a specially designated box for the code, simply check the document for the phrase "Verification Code" and then note the four groups of four alphanumeric characters, separated by hyphens: XXXX-XXXX-XXXX-XXXX.

What to do with the code: If your W-2 does have a verification code, the form will include these instructions to taxpayer and tax preparers:

Verification Code. If this field is populated, enter this code when it is requested by your tax return preparation software. It is possible your software or preparer will not request the code. The code is not entered on paper-filed returns.

Some taxpayers will find that their W-2 forms will have a specific "Verification Code" box or line, but it will be blank.

In these cases, don't worry. You don't need to bug your employer or the payroll company for the number. They simply have created the forms to accommodate the new code, but you weren't one of the 50 million to get one this year.

Requested but not required: Even if you do have a code but forget to add it to your return when you file or enter it incorrectly, the IRS says no problem.

The verification code is still in its test phase. As such, the code will not be included in Forms W-2 or W-2 data submitted by participating payroll service providers to the Social Security Administration or to any state or local revenue departments.

That means, says the IRS, that for now any verification code omissions or errors won't slow down the IRS' processing of returns.

But if you do have a W-2 code, do try to remember to include it when prompted by your tax software when you prepare your return.

This time it's a test, but if these expanded codes show as much promise in helping to reduce tax identity theft and refund fraud as did the initial results from the 2016 filing season, the IRS will roll the code out to all filers.

When that happens, which I suspect will be in a very near filing season, you'll be required to enter the verification code before the IRS will accept your return. And you, as a willing test participant in filing season 2017, will already be ready for it.

Jim, personally I would ignore it. As noted in the post, it's in a pilot program so, according to the IRS, not entering a code won't affect this year's filing. But being a noodge, I would call the payroll company and/or my employer and ask why the shortage of digits. Kay

I guess this is great but what do I do if the verification code on my W-2 has only 14 digits, NOT 16? My tax software is rejecting my return because of this error.