Rep. Mick Mulvaney is going to have to answer some nanny tax questions if he hopes to become President-elect Donald Trump's budget director. 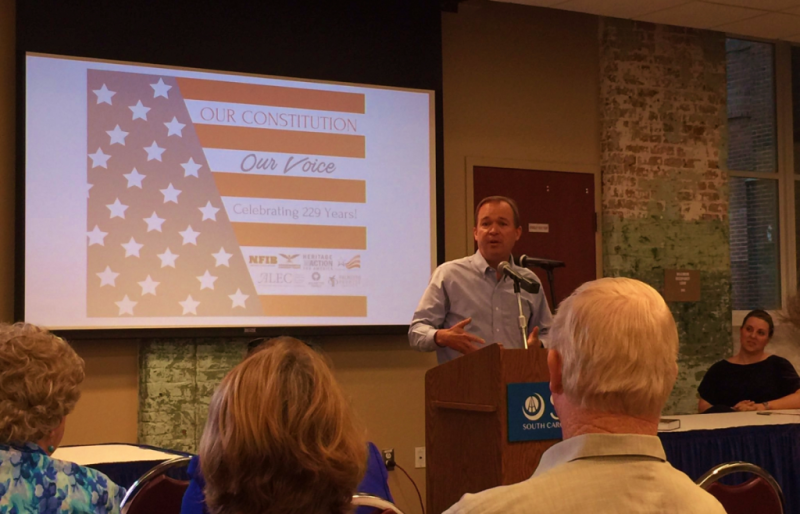 Rep. Mick Mulvaney speaks to some of his South Carolina constituents on last September's Constitution Day. (Photo by Erik B. Corcoran via Twitter)

The South Carolina Republican was elected to Congress in 2010 as part of the midterm Tea Party wave. Since then, the man whom some have called a debt warrior has been a major player in the conservative Freedom Caucus and has focused on ways to cut federal spending.

He probably should have focused on his tax filings, especially those from from 2000 to 2004

$15K in missing FICA taxes: During those tax years, Mulvaney failed to pay $15,000 in Federal Insurance Contributions Act, or FICA, taxes, as well as federal and state unemployment taxes, for a household employee.

The tax revelation came in his official nominee questionnaire and was first reported by The New York Times.

Mulvaney said he paid the taxes after discovering the oversight during his confirmation review.

History of appointees' tax troubles: Nanny tax troubles doomed the nomination in 2009 of Nancy Killefer, who had been tapped by President Obama to be the nation's first Chief Performance Officer. Her job would have been to make sure government offices operated as efficiently as possible.

Around the same time Killefer was kissing her government job hopes goodbye, Tom Daschle withdrew his nomination to serve in the Obama Administration as head the Department of Health and Human Services. Daschle, a former Democratic Senator representing South Dakota, neglected to claim all his income, including the value of a chauffeur-driven car, on his returns. There also were questions about charitable tax deductions.

Former Treasury Secretary Timothy Geithner fared better. Despite messing up his self-employment tax payments, Geithner was confirmed for his key financial post in the Obama Administration.

Mulvaney's tax test: Will Mulvaney be able to do what Geither did and get his White House appointment confirmed by the Senate? Or will the nanny tax curse fell him, too?

When the nanny tax trouble of the potential director of the Office of Managmeent and Budget came to light, Senate Minority Leader Chuck Schumer (D-New York) suggested it could be disqualifying.

"If failure to pay taxes was disqualifying for Democratic nominees, then the same should be true for Republican nominees," said Schumer in a statement.

The matter no doubt will come up next Tuesday, Jan. 24, when Mulvaney has his first confirmation hearing before the Senate Budget Committee.

If you hire one of these folks, you are, in the IRS' eyes, a household employer as long as you meet some other criteria.

Basically, if you hire someone to perform duties in or around your home and have the ability to control when, where, how or by whom the work is done, you are a household employer and have some tax tasks to complete each year.

The first is due at the end of January. You must file a Form W-2 for your employee by Jan. 31, unless that date falls on a weekend or federal holiday.

Yep, this is the same W-2 that all salaried workers get. It details the worker's earned wages, taxes paid and any benefits they received during the tax year.

FICA tax requirements: You don't have to withhold income tax from a household worker's pay unless the employee asks you to do so. But you when you pay your household employee a certain amount -- it's adjusted annually for inflation; for 2016 and 2017 tax years it is $2,000 or more -- during the year, you do have to pay Social Security and Medicare taxes for that worker.

This is the 15.3 percent FICA tax (shameless plug: read more about FICA in the ol' blog's tax glossary) that Mulvaney missed.

It's the money that most salaried workers see taken out of their paychecks to go toward their future Social Security and Medicare benefits. In a typical business setting, the FICA tax amounts are split equally between the employer and employee; each pays 6.2 percent of income toward Social Security and 1.45 percent toward Medicare.

On the household help front, though, some generous employers also pick up their employees' FICA tax portions.

Regardless of who pays the FICA taxes, you must give each household worker a W-2 with all the tax details by the Jan. 31 tax deadline or pay a penalty.

This year, you also must get that information to the Social Security Administration (SSA) by the end-of-January due date. You send it to the SSA by submitting a copy of the worker's W-2 via Form W-3, Transmittal of Wage and Tax Statements. The SSA has a special employers web page to help with this process.

Numbers you'll need: To take care of your household employer tax tasks, you'll need some information from your employees.

The key piece of data is each domestic worker's Social Security number.

If you don't have an EIN, request one by submitting Form SS-4 Application for Employer ID Number. At this point in the tax season, it's best to use the online option.

Employee, not a contractor: Don't think you can slough off household employer tax responsibilities by calling your help independent contractors.

Tax and labor experts caution that the IRS has consistently ruled that domestic workers should be classified as employees, not contractors. The key here is that as the hiring agent, you have the right to control what, when, where or by whom the work is performed.

Long-term and ongoing arrangements with a housekeeper generally are deemed as an employer-employee relationship, even if the worker brings his or her own supplies.

The IRS has teamed up with the Department of Labor to focus on proper classification of household workers. Improper designations could be very costly.

More info from IRS (and me!): You can find more on determining whether a worker is an employee or contractor in IRS Publication 1779, as well as in my previous post on the tax treatment of seasonal workers and this one on Uber's employee/contractor issues.

IRS Publication 926 goes into detail on the tax duties of household employers.

Yeah, that's a lot of reading. But household employee taxes are an important matter, even if you don't ever plan on holding a top government job.

So file them accurately and on time. And as in all complicated tax situations, get help if you find it's just too much to handle on your own.

The cost of a good tax professional will be well worth the price during filing season and -- never say never -- in possible future Washington, D.C. job searches.