Not to run Donald J. Trump's penchant for tax secrecy into the ground -- OK, maybe just dig a shallow little hole and kick some on dirt on it -- but I couldn't resist the latest bit of info about the new prez's still concealed tax returns.

We are not now or ever -- that's never, just in case you're unsure in our new alternate facts world -- going to see his tax returns. 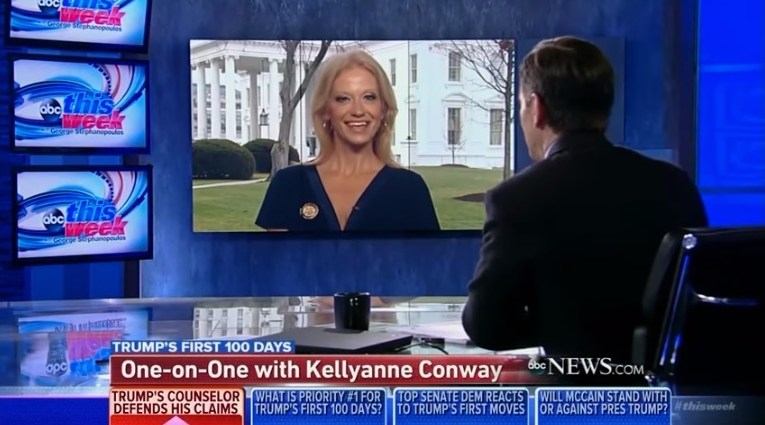 During an interview this morning on ABC's "This Week with George Stephanopoulos" political news show, White House counselor Kellyanne Conway said the issue is a non-issue and that her boss is not going to show us his 1040s.

Conway characterized the continuing interest in Trump's taxes as an attempt to re-litigate the presidential campaign. By not sharing at least some of his filings with the public, the now 45th president broke a 40-year tradition.

But since he broke so much this election cycle, it doesn't matter. At least not to him or his retinue.

Who cares? "The White House response is that he’s not going to release his tax returns," Conway said.

Oh, wait. Because nobody cares.

Yep, that's the Trump Administration's story and they're sticking to it.

"We litigated this all through the election. People didn't care," Conway told Stephanopoulos. "They voted for him, and let me make this very clear: Most Americans are very focused on what their tax returns will look like while President Trump is in office, not what his look like. … People want to know that they're going to get tax relief and he has promised that."

As for possible tax law changes -- Trump now joins House leadership in seeking three income tax brackets topping out at 33 percent -- Conway said the Administration is hoping that "the Democratic Senate will support his tax relief package the way the Democratic Senate in 2001 did for President Bush."

I think she means the Democrats in the Senate, or else she knows something else about last November's vote counts in the Upper Chamber's races that we don't.

Poll and petition indicate interest: I also think Conway was making the classic political and PR sidestep from a topic she didn't want to talk about to one that she hopes people will latch onto instead.

A poll released earlier this month found that Americans in both parties want to see his taxes.

So do the folks who've signed the first We the People petition filed with the White House after Trump was sworn in on Jan. 20. It wants, among other things, for him to reveal what's in his tax filings. As of 7 p.m. Central Time tonight, more than 232,000 people had signed the online petition.

Speculation continues: Until Trump does reveal his returns, speculation will continue as to what's on them. Russian business ties? Not as much money as he proclaims? Or something even more damaging?

That last possibility is being floated by, among others, Matthew Yglesias of Vox. He writes:

Trump is pretty clearly hiding something damning in his tax returns. I don't know what it is, and most likely neither does Mitch McConnell or Paul Ryan or anyone in their caucuses. Like most people, I am curious what it is. And I bet McConnell and Ryan and rank-and-file Republican Party members are curious too.

Yglesias also calls out McConnell, Ryan and the rest of the Republican Party for letting Trump get away with not sharing his returns.

Congressional Republicans, writes Yglesias, have the ability to force tax disclosure by Trump, but, he continues:

[T]hey've all reached the conclusion that whatever damning information it is that Trump is hiding, it's important enough to Trump to not be worth crossing him over, but not so important that the American people should see what it is.

I'm not sure what kind of fact that could be. But since it seems that we are never going to figure out what it is — and that the reason we're not going to figure it out has nothing to do with this alleged audit — I sure hope they’re right that the underlying substance isn't that bad.

Do you agree with Conway and her boss or Yglesias and the White House petitioners?

And just for fun, what do you think is on The Donald's returns that he might not want the rest of us to see?

"And just for fun, what to you think is on The Donald's returns that he might not want the rest of us to see?"

Suborning defamation, Kay? Just for fun? How could what anyone "thinks" "might" be on his returns be relevant or useful other than to defame the man? The unbridled nastiness of the anti-Trumpers proves why America elected the right guy.

I think it is ridiculous that we are not seeing his taxes. I think they are trying to do it with some of his cabinet as well.