I'm late blogging today (Monday, Jan. 9) because I spent the day with my Mom. 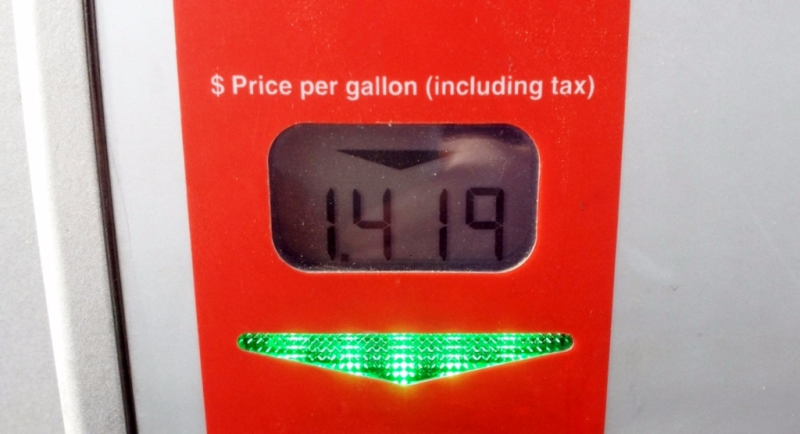 All those errands my Mom and I run mean that I have to fill up my car before heading home. Unfortunately, pump prices are not as low as this $1.42 per gallon I paid for regular unleaded back in February 2016.

It's not as Gilmore Girlish as it might sound. During my regular visits to her place, we run errands. And by run, I mean drive around her Central Texas community to buy groceries, visit doctors, get lunch, take her pup to the vet and occasionally check out fashions at the local department stores.

This most recent visit was a particularly mile-heavy one, meaning I had to top off my tank to ensure I made it back to Austin without having to call the hubby (or AAA if he decided not to answer!).

But I can't really complain for a couple of reasons. One, Mom foots my gas bills. Flashback to teenage years!

And two, gas prices aren't that bad here in Central Texas. While it's nowhere near the $1.42 per gallon just 11 months ago, we're still just paying around $2 here.

Gas taxes increase in a few states: That's not the case in other parts of the United States. This year drivers in seven states are dealing with higher pump prices thanks in part to increased state gas excise taxes.

The places where the Institute on Taxation and Economic Policy says gas taxes went up on Jan. 1 are:

Nebraska raised its gasoline tax rate by 1.5 cents per gallon as part of a four-part, six-cent increase originally enacted in 2015. That will mean Cornhusker State drivers now pay 29.2 cents per gallon in gas tax.

Georgia's gasoline tax will rise by 0.3 cents, pushing the Peach State's tax on that fuel to 31.3 cents per gallon.

North Carolina gas and diesel tax rates each will rise by 0.3 cents under a new formula linking the state’s fuel tax rates to growth in population and energy prices. The new Tar Heel gas tax rate is 35.6 cents per gallon.

Indiana raised its gas tax by 0.2 cents, bumping the Hoosier State rate to 30.1 cents per gallon.

Florida's 0.1 cent gas and diesel tax rate increases are tied to inflation.  This means the Sunshine State's gas tax rate in 2017 inches up to 36.7 cents per gallon. 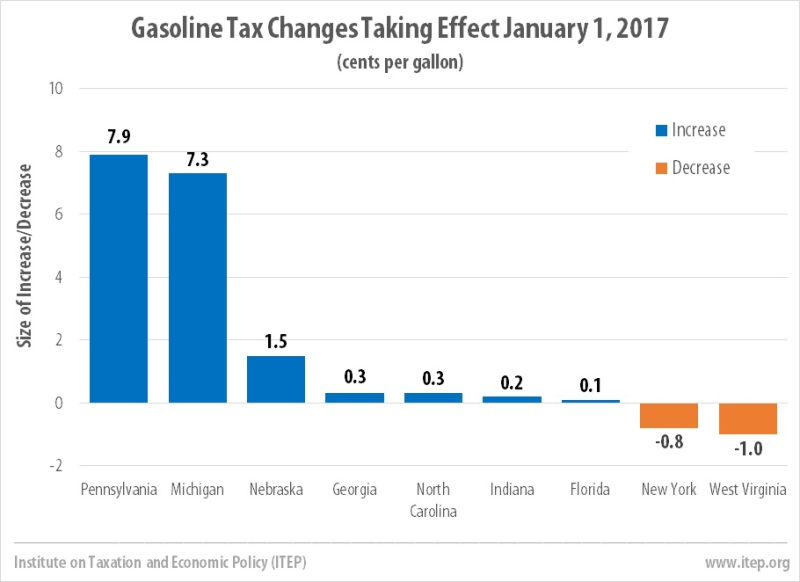 At least in exchange, New Jersey residents got tax cuts in their sales tax (from 7 percent to 6.6 percent), a larger state earned income tax credit and the end of the estate tax.

New York's gas and diesel tax rates were reduced by 0.8 cents per gallon, dropping a tad to 16.2 cents, as part of an annual adjustment based on the price of gas.

West Virginia also cut its gas and diesel tax rates by 1.0 cents per gallon thanks to, like the Empire State, an annual adjustment based on the price of gas. That makes the Mountain State's gas tax 32.2 cents per gallon.

"Altogether, it appears that more than a dozen states will seriously debate gas tax changes [in 2017]," Carl Davis, research director at the Institute on Taxation and Economic Policy, told USA Today.

One of those debates could be a state smack dab in the middle of the oil patch.

Oklahoma has not had an increase in its gasoline and diesel taxes since 1987. But those excise taxes, which are among the lowest in the nation, are becoming a tempting target for state lawmakers desperate for revenue amid a third straight year of budget declines.

Several Republican legislators said last week they expect proposals will be unveiled once the session begins in February to increase the state’s gasoline and diesel taxes of 17 cents and 14 cents, respectively.

In Alaska, another oil dependent state, fuel taxes haven't increase since 1970. But Gov. Bill Walker proposed last month in his new budget to triple the gas tax over the next two years. He wants to go from 8 cents per gallon to 16 cents this July 1, and add another 8 cents per gallon to the tax on July 1, 2018.

Do higher gas prices affect how much you drive? Or do you just grit your teeth and pay what it takes to keep your vehicle on the road?

That’s a great post . It will definitely help me. I would love you to read this: