The 115th Congress has been in session less than a week, but the Representatives and Senators are wasting no time in introducing legislation. 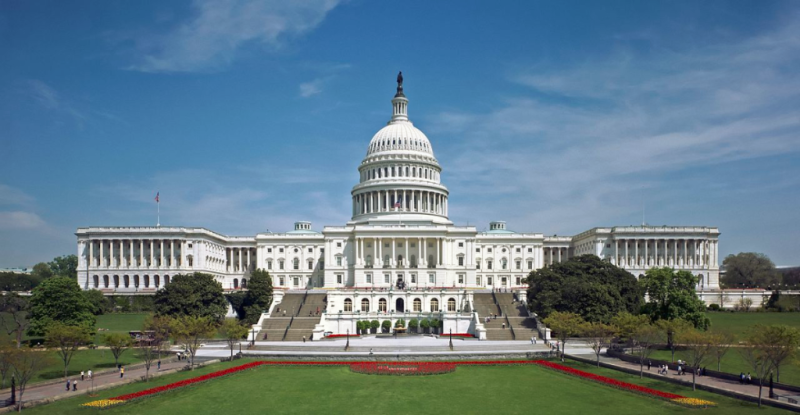 The 115th Congress convened on Jan. 3. During their first short week of work, Representatives and Senators have introduced eight tax measures. (Photo by Ottojula via Wikimedia Commons)

Since the Jan. 3 swearing in (and my Congess.gov search this afternoon), 490 bills have been introduced, 428 in the House and 62 in the Senate.

And even though there's greater hope that we'll finally get some sort of comprehensive tax reform, that's not stopping individual lawmakers from putting their tax ideas out there now.

So far eight tax bills have been dropped in their respective chamber's hopper. They are, in the order they were introduced:

H.R. 25 was introduced by Rep. Rob Woodall (R-Georgia) on Jan. 3. It would "promote freedom, fairness, and economic opportunity by repealing the income tax and other taxes, abolishing the Internal Revenue Service, and enacting a national sales tax to be administered primarily by the States." It has 34 cosponsors and is pending in the House Ways and Means Committee.

H.R. 29 was introduced by Rep. Bob Goodlatte (R-Virginia) on Jan. 3. The so-called Tax Code Termination Act calls for the would "terminate the Internal Revenue Code of 1986 after December 31, 2021, except for self-employment taxes, Federal Insurance Contributions Act (FICA) taxes, and railroad retirement taxes. A two-thirds majority vote in Congress is required to change such termination date." Any replacement tax code must be "a simple and fair system that: (1) applies a low rate to all Americans, (2) provides tax relief for working Americans, (3) protects the rights of taxpayers and reduces tax collection abuses, (4) eliminates the bias against savings and investment, (5) promotes economic growth and job creation, and (6) does not penalize marriage or families. The new federal tax system must be approved by Congress in its final form by July 4, 2021." H.R. 29 has 38 cosponsors and has been referred to the House Rules Committee.

H.R. 30 was introduced by Rep. Richard Hudson (R-North Carolina) on Jan. 3. This measure, dubbed the Farmers Against Crippling Taxes Act, would repeal the federal estate, gift and generation-skipping transfer taxes. It doesn't have any cosponsors yet and is awaiting Ways and Means consideration.

H.R. 32 also was introduced by Hudson on Jan. 3. He dubbed it the ROSIE Act. The acronym stands for Realizing Opportunity for Spouses in Employment. It would exempt the spouses of active duty members of the Armed Forces from being counted as employees to determine if an employer is an applicable large employer under the Patient Protection and Affordable Care Act, otherwise known as Obamacare. It has no cosponsors and is pending in the Ways and Means Committee.

S. 13 was introduced by Sen. Sheldon Whitehouse (D-Rhode Island) on Jan. 3. The so-called No Windfalls for Government Service Act would "establish a $1 million lifetime limitation on the nonrecognition of a taxpayer's gains from the sale of property pursuant to a certificate of divesture to comply with conflict-of-interest requirements for certain federal government positions." Under current tax law, executive branch and judicial appointees can defer paying taxes on profits from assets they sell to comply with ethics rules. Whitehouse says the bill is needed to keep President-Elect Donald Trump's "enormously wealthy cabinet nominees, and possibly Trump himself, from ducking millions of dollars in taxes."  S. 13 has three cosponsors, including frequent Trump critic Sen. Elizabeth Warren (D-Massachusetts), and is pending in the Senate Finance Committee.

S. 18 was introduced by Sen. Jerry Moran (R-Kansas) on Jan. 3. The bill, dubbed the Fair Tax Act of 2017, calls for the repeal of all federal personal income taxes, corporate income taxes, payroll taxes, capital gains taxes and gift and estate taxes. They would be replaced with a revenue-neutral, personal consumption tax (essentially a national sales tax) on all new goods and services. Under the proposal, the sales tax rate would be 23 percent in 2019 and would be adjusted in subsequent years. Moran has introduced similar legislation in prior Congressional sessions. This latest bill has two cosponsors and is pending in the Finance Committee.

S. 20 was introduced by Sen. Chris Van Hollen (D-Maryland) on Jan. 3. The so-called CEO-Employee Paycheck Fairness Act of 2017 is designed to address income inequality, an issue raised during the recent presidential campaign. The bill would "deny a publicly held corporation a tax deduction for the payment of performance-based remuneration in excess of $1 million to any of its current or former officers or directors if such corporation does not meet the pay fairness requirement established by this bill." Basically, Van Hollen wants to keep corporations from getting tax breaks for CEO bonuses unless they also give their employees a raise. He has introduced such legislation previously. The current version has no cosponsors yet and is pending in the Finance Committee.

H. J. Res 21 was introduced by Rep. Steven Palazzo (R-Mississippi) on Jan. 6. The measure calls for an amendment to the U.S. Constitution to limit Congress' power to impose a tax on a failure to purchase goods or services. Palazzo's resolution would effectively reverse the health care mandate that "forces Americans to choose between the purchase of goods and services or tax penalties." When he introduced the same resolution in in a prior Congress, Palazzo said he did so because "the government has no business taking your hard-earned money just because you don’t spend it the way Washington wants." The resolution has two cosponsors and was referred to the House Judiciary Committee.

Tax making process: Five of the 115th Congress' tax bills come from the House. That's not surprising, since constitutionally, tax measures must originate in the House.

But as you can see from this session's early tax action, that doesn't stop Senators from introducing bills.

And there are ways to maneuver around what is known as the origination clause. The most common tax techniques include introducing an identical measure in the House or gutting an already introduced House bill and dropping the Senate tax language into it.

There's likely to be a lot of cobbling together of tax ideas as both chambers work toward what they -- and we taxpayers -- hope will be sensible tax code overhaul.

There also are likely to be many more tax bills introduced during the tax reform process, many to make political points rather than materially contribute to tax reform.

But for the first week of 2017, the eight measures already drafted earn the New Year's first By the Numbers honor.

HR-25 and S.18 are the most researched and supported tax reform measures on the docket today... With over three dozen cosponsors within the first week of the new congress, these bills should be immediately recognized and pushed through the legislative process, especially now that we have a POTUS that would be open to signing this bill.

The FairTax bill effectively accomplishes every objective that Mr. Trump campaigned on, as it abolishes the IRS. It abolishes the current tax code. It removes all tax restrictions on the repatriation of trillions in off shore capital returning to our shores and it makes the USA into the world's tax haven for capital investment, corporate relocation and business start-ups. It abolishes the income and FICA taxes and allows workers to bring home every penny that they earn, and more importantly, it allows Americans to CHOOSE when, where and how much taxes they choose to pay via their consumption choices.

HR-25/S-18 would be a decentralization of power from government back to the individual wage earner, and would make every savings account into a tax free, penalty free investment while at the same time, incentivizing small business start-ups. Please advocate passage of this needed reform.