You know what that means. Taxes. For folks in Michigan, at least. 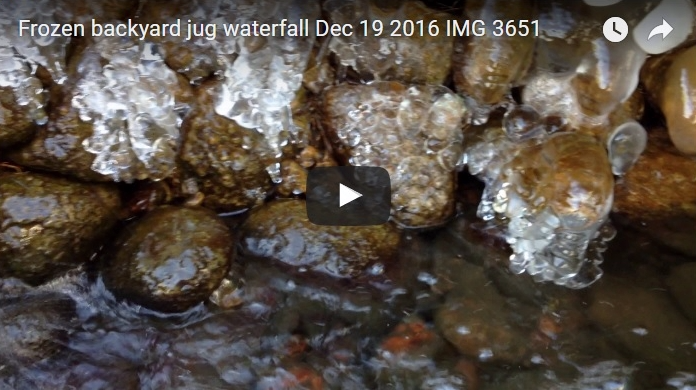 Much of the United States has been in the grips of the Weather Channel named winter storm Decima this month. The Arctic air even dropped down to the Austin area earlier this week, producing a bit of a freeze in our back yard waterfall/stream. (Click image to watch my YouTube video.)

OK. Tax collection in the Great Lakes State isn't limited to the coldest months, which are pretty plentiful there. And it's not even limited to one state.

Property tax bills, which actually are usually issued by county (or parish) assessor/collectors rather than states, go out in the latter part of the year across much of the United States.

Summer taxes are due on July 1 of each year, but can be paid as late as Sept. 14 without penalty.

Winter taxes are due Dec. 1 of each year. As with the summer levies, you have several months -- up to Feb. 14 of the next year -- to pay your winter taxes without penalty.

The dual Michigan property tax bills originally allowed for essentially most city-related taxes to be collected generally in the summer, with taxes for mostly county services falling in the winter cycle.

However, lawmakers shifted more taxes to the summer, notably school taxes regardless of whether city or country based, so that school districts could get their funding before the new class year started.

Depending on how many taxes and their rates, one season's bill could be substantially larger than the other.

Tax payment deduction timing: Paying your county and/or city property taxes early, specifically in December, could help reduce your federal tax bill. That tax is one you can claim if you itemize on Schedule A.

Of course, you need to look at your expected tax bill for this year and whether the added property tax deduction will help more now or in the coming tax year.

Some years, the hubby and I paid our real estate levy the next year; like Michigan's collectors, ours here in Texas also gives us several months before charging late fees. That way it cut that coming year's tax bill.

A couple of other times, we paid part of our property taxes in December and the rest in the next year, splitting the tax break.

Tax moves now, next year's planning: 2016 might be a good year to take as many deductions as you can.

If the new Republican president and GOP-controlled House and Senate do get tax reform done next year, the new laws likely would be retroactive to Jan. 1, 2017. The expected lower income tax rates, not to mention possible limits to some tax breaks, would make current deductions more valuable this tax year.

But, again, you need to run your own tax and budget numbers. If paying your property taxes in December works for your situation, then get them to your local tax collector by Dec. 31.

Don't miss the deadline: Be sure to check whether mailing the tax payment and having the envelope postmarked is sufficient to have them credited for this tax year.

While that works for the Internal Revenue Service and most state income tax payments and filings, some more local jurisdictions might demand the money (or at least the check) in hand in order to credit it by a specific date.

Also check out the other 11 tax moves you should consider making by Dec. 31.

And as we officially head into the coldest season of the year, stay warm!

You also might find these automotive items of interest: