America's 538 electors are meeting today in their state capitals to cast votes that will make the Nov. 8 presidential election official.

Although a handful of electors vowed not to vote for Donald J. Trump despite their states' election results, The Donald is expected to garner received more than the 270 Electoral College votes needed to ensure he will become the 45th U.S. president next month. 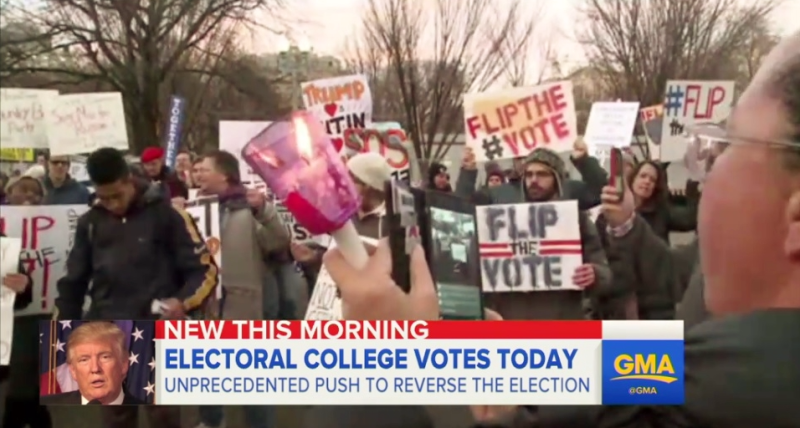 Crazy election cycle continues: The controversy surrounding the penultimate step -- the vote won't be final until Jan. 6, 2017, when Congress counts the Electoral College ballots -- is just the latest in the crazy that was the 2016 presidential campaign.

It's been a wild run -- from a record 17 Republicans seeking their party's nomination to the Democrats choosing the first woman presidential candidate of a major party to Trump's unbridled use of Twitter to FBI investigations into Hillary Clinton emails and the law enforcement agency's stop-and-start announcements about the process to confirmation that Russian operatives hacked U.S. political emails -- so the electoral vote protests are not surprising.

Just as unsurprising are proposals at both federal and state levels that would require presidential candidates to open their tax returns to the voting public.

No tax transparency from Trump: Oh, yeah, in the listing of how unusual the 2016 election was, I forgot to mention that Trump never revealed his tax filings. He held firm on not releasing the 1040s because, he said, they were under Internal Revenue Service audit.

Trump is the first major presidential candidate in more than 40 years to not allow us at least of glimpse of his private tax life.

The open tax practice began in 1972 with President Richard Nixon. Since then, only one competitive candidate, Texas billionaire Ross Perot who ran in 1992 as an Independent and got 19 percent of the vote, refused.

Tax experts and IRS commissioners, both former and current, said that an audit is not necessarily a reason for a presidential candidate to not let voters see his taxes. And Trump's insistence on keeping them closed led to much speculation about what the filings might show.

Federal tax transparency legislation: Some lawmakers think that voters should have the opportunity to evaluate a White House wannabe's taxes. To that end, they have introduced bills requiring such disclosure.

U.S. Sen. Ron Wyden, D-Oregon, got the tax openness ball rolling. On May 25, the ranking minority member of the Senate Finance Committee introduced S. 2979, which would require presidential candidates to release their tax returns.

"Running for president is a job interview. Every candidate has to stand up before the public and show that they've got the background, the temperament, and the character to lead the nation and be Commander in Chief," said Wyden in introducing the Presidential Tax Transparency Act. "I believe that after decades of tradition, releasing tax returns is a big part of that process."

U.S. Rep. Anna Eshoo, D-California, introduced a companion bill (H.R. 5386) in the House on the same day as Wyden's proposal. Both the House and Senate legislation would require presidential nominees to release three years' worth of tax returns with the Federal Election Commission within 15 days after receiving their party's nomination.

Despite getting some renewed attention in October after the New York Times published material that indicates the now president-elect might have avoided paying federal income taxes for 18 years, the House and Senate bills languished in their respective, GOP-controlled, chambers.

While Wyden and Eshoo might reintroduce their bills in the new 115th Congress, the move will be largely symbolic. The next presidential election is four years away (although campaigning for it will start much, much sooner). Plus, any such measures will face the same indifference, at least for the two years until the midterm elections, from the still Republican House and Senate.

New York State of tax transparency mind: Some state lawmakers, however, hope to force insight into presidential candidates' taxes through legislation at their governmental levels. 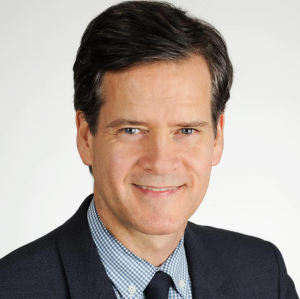 The so-called TRUMP Act, or Tax Returns Uniformly Made Public Act, would require candidates to submit five years' worth of federal taxes with New York's state Board of Elections 50 days prior to a general election.

"Tax returns give the American people important insight into a candidate’s financial standing and shine a light on potential conflicts-of-interest," Hoylman wrote in a Dec. 9 piece for the New York Daily News. This is especially true of a candidate with complicated business affairs, like the President-elect."

Failure by a candidate to file their income tax returns with the N.Y. Board of Elections would disqualify them from appearing on the November general election ballot in November. In addition, and New York's Electoral College representatives would be prohibited by state law from casting a vote for any candidate who didn't comply with tax transparency requirement.

Similar measures also are being contemplated in Massachusetts and Maine. 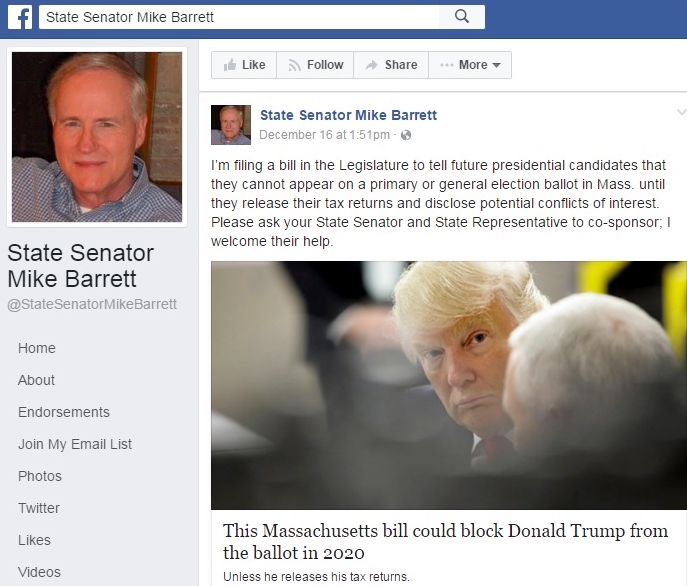 Barrett wants presidential candidates to release their three most recent federal tax filings to get on the primary ballot and their five most recent years to qualify for placement on the general election ballot. Candidates would also have to file a "statement of financial interest," which is required of all Massachusetts state office seekers.

Maine State Rep. Seth Berry, a Democrat, also used Facebook as the avenue to announce that he has introduced a bill to require all candidates for statewide or national office to release the last five years of their tax filings in order to qualify for that state's ballot.

"It has always been my belief that sunshine is the best disinfectant," Berry told his social media friends and followers.

Tax privacy exception needed: While I am a big supporter of tax privacy, when it comes to the people who want to lead our country, I want to see their 1040s. They can provide valuable insight into a candidate's financial standing, more so than the federally required financial disclosures.

A tax return shows how much a candidate earns and from what sources.

We can see whether they are paying a higher or lower overall tax rate than the average American.

Any tax breaks and/or loopholes they utilize are on display. So, too, is their charitable nature based on how much they give to IRS qualified nonprofits.

When a candidate's return is complex, it could shine light on potential conflicts of interest.

Plus, by seeing candidates' and the eventual winner's tax returns, we can see whether any tax reform he or she supports is for the good of the country, its voters or primarily his or her own tax situation.

The man who will occupy the Oval Office starting next month did not give us voters such an opportunity this year to find those things out on his 1040s. I suspect he'll continue to hold out in 2020.

Worse, future candidates will follow his example … unless every state and/or Congress requires such tax transparency.