Trump saves some Carrier jobs, but at a tax cost

Was president-elect Donald Trump played by Carrier? The company, a division of United Technologies that makes heating and air conditioning units, agreed to keep 1,000 jobs in Indiana rather than move them to Mexico. 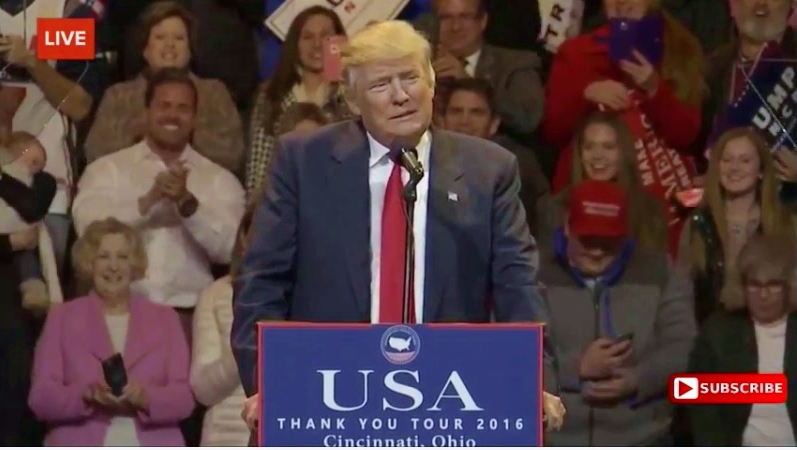 Donald Trump addressing supporters Dec. 1 in Cincinnati as part of his post-election "Thank You Tour." He also stopped in Indianapolis to celebrate Carrier's decision to keep 1,000 jobs at that plant rather than move them to Mexico. (Click image to watch the president-elect's full speech)

But Carrier also got some nice tax incentives from Uncle Sam and Indiana for its apparent change of mind.

Apparently, corporate negotiators read Trump's "The Art of the Deal." And some think they made out better than the incoming 45th president.

Corporate hostage template: Former Democratic hopeful Bernie Sanders, the again-Independent Vermont Senator who tapped into a liberal vein of populism, said in a Washington Post op-ed piece that Trump "has signaled to every corporation in America that they can threaten to offshore jobs in exchange for business-friendly tax benefits and incentives."

What kind of deal did Carrier cut to keep 1,000 Hoosiers working? We're not sure yet about the federal ransom cost, but many speculate that there was an implicit threat that Uncle Sam might pull the current $6 billion in federal contracts United Technologies has, primarily for Pentagon projects.

At the state level, officials in Indiana, home of vice-president-elect Gov. Mike Pence, reportedly will give Carrier $7 million in incentives over the next decade for keeping the 1,000 workers employed.

Special tax treatment deals like the one made for Carrier -- which, by the way, state officials say hasn't been finalized -- are commonplace. But most economists say that such government interference in the free market discourages companies from making the most productive and efficient decisions from a business point of view at the expense of public coffers.

Trump turnaround: Those types of payments were slammed by presidential campaigner Trump as costly giveaways.

Many economists say that The Donald's pre-election analysis was correct. They say that cutting individual deals with different companies is a costly and ineffective way to slow U.S. business moves in today's competitive global economy.

Scott Drenkard, director of State Projects at the Washington, D.C.-based Tax Foundation, says that tax incentives are not supported as good tax policy by either theory or empirical literature.

"Good tax policy has a broad tax base and low tax rates. Special tax abatements, exemptions, exclusions, deductions, and credits all narrow the tax base, meaning a higher overall rate is required to bring in the same amount of government revenue," writes Drenkard in a post about the Carrier deal at the nonprofit's Tax Policy blog. "The latest survey of the empirical literature on tax incentives finds that most studies show tax incentives to be linked with statistically insignificant effects on the broader economy, or negative economic outcomes."

Many tax experts agree. For years, business analysts and economists have argued that special tax breaks aren't the best way to attract or keep businesses within a particular jurisdiction. They say a better way to get businesses to come to or expand in your location is to tax all firms, newcomers and existing offices, equitably and provide a well-educated pool of people they can hire.

"Some of the draw for companies to move a manufacturing plant to Mexico is based on labor costs, and the United States doesn't necessarily want to compete on having the lowest wages of any country. However, we can compete on having a simple, low rate, broad-based business tax code," writes Drenkard.

He adds (with some links provided by me):

We can also make a tax code that has international components that tax companies based on where they make their profits (a territorial tax system) or where they sell their goods and services (a destination-based system, as proposed in the House GOP Blueprint plan). Our current international tax provisions, by contrast, tax companies based on where their headquarters is and tax all their profit obtained from anywhere in the world. This is why companies have recently been "inverting," or moving their headquarters.

Unless we fix these issues, we’d find ourselves cutting quite a lot of deals to try to convince companies to stay or relocate and grow here. It would be much better to have a system that is open and competitive to all comers.

You win some jobs, you lose some jobs: Still, it's easier sometimes to just throw tax money at companies, even when they aren't completely effective.

That's the case at Carrier. The company still plans to shut down other operations.

The New York Times reports that workers arriving for work after the Trump/Carrier announcement and victory tour visit by Trump and Pence received a letter titled "Company Update on Indianapolis Operations." The message informed them that, "While this announcement is good news for many, we recognize it is not good news for everyone. We are moving forward with previously announced plans to relocate the fan coil manufacturing lines, with the expected completion by the end of 2017."

So goes business and politics.

Some are upset already that he seems to be reneging on his "Drain the Swamp" campaign call.

Conservative talk radio host and former U.S. Rep. Joe Walsh of Illinois summed up his and his followers feelings in a recent Tweet prompted by the president-elect's recent cabinet picks: "What about the swamp? Huh? Can you hire someone who doesn't work for Goldman Sachs?"

Others are, let's say miffed, too.

The New York Times reports that "some supporters, including those closest to Mr. Trump, are warning him that after running for president as a disrupter of the political and ruling classes, he risks charges of hypocrisy by bringing into his administration the kinds of people he vowed to drive out of Washington."

Even Sarah Palin, former veep nominee and earlier reported to be under consideration to head Veterans Affairs in the Trump Administration (but probably no longer), derided the Carrier deal as "crony capitalism."

But those without Washington, D.C. connections seem to be standing by their man.

The workers at the Carrier plant effusively welcomed the incoming president.  He also held forth before cheering crowds as he and Pence made other stops in Rust Belt communities to thank supporters for helping in his surprise White House win.

Trump's persona and big league talk may be enough to get him some breathing room among voters outside the Beltway. But if he doesn't deliver more than a 1,000 jobs saved here and there, things ultimate could change even among the Trump faithful.