Missing the Dec. 31 RMD deadline could be very costly

Time is rapidly running out to make year-end tax moves, but if you're a septuagenarian, here's one that you definitely cannot afford to overlook. 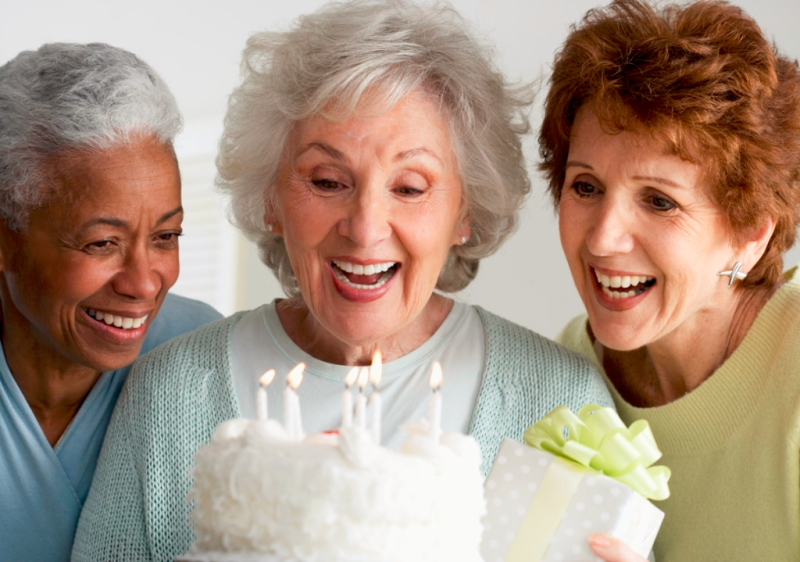 If you're 70½ or older, congrats and happy, happy on all those full and half birthdays! Remember, though, that now you must take out at least an IRS-specified amount from your tax-deferred retirement account(s) by the end of the year. Miss the deadline and you'll owe a major tax penalty. (Birthday party photo courtesy Today's Senior Network)

Half birthday tax trigger: If you're 70½ and have a traditional IRA (or more than one of these accounts) or other tax-deferred retirement plans, then the tax law says you've got to start taking money out of it. In most cases, that's by the end of the tax year.

But since Dec. 31 this year is on a Saturday, you effectively have until tomorrow, Friday, Dec. 30, to take care of your required withdrawal, unless your account administrator is working over the weekend.

These mandated withdrawals are known as required minimum distributions, or RMDS.

In addition to traditional IRAs, those accounts where contributions sometimes are tax deductible and taxes aren't collected as earnings grow, the RMD rule applies to SEP IRAs, SIMPLE IRAs, 401(k) plans, 403(b) plans, 457(b) plans, profit sharing plans and any other defined contribution plans.

Tired of waiting for tax revenue: The reason for the withdrawal requirement is simple. Uncle Sam wants his money.

He's been waiting for years, likely decades, for his tax cut on these tax-deferred retirement accounts. And he's had enough.

So once you celebrate your 70½ birthday -- I know I have a big party planned for that day -- he wants you to start taking out at least some of your taxable (at ordinary income tax rates) retirement money.

About that birth date: Despite my wisecrack about a big party for your 70½ birthday, that actual date is important. It determines whether you must take your first RMD this year, or whether you can push that initial distribution into the next tax year.

The Internal Revenue Service says you reach age 70½ on the date that is six calendar months after your 70th birthday.

For example, your 70th birthday was June 30. You reached age 70½ on Dec. 30. Don't worry, you don't have to take your first RMD by the end of the year. You can wait until April 1 of the next year to take that inaugural RMD.

If, however your 70th birthday was July 1, you turned 70½ on the subsequent Jan. 1, according to the IRS calendar. Yes, the tax agency gives you a free day. And that means you don't have to make an RMD for the chronological year you actually turned 70½.

Instead, since your half-birthday is, in the IRS' eyes, on the following Jan. 1, your first RMD is due that next year, either by that Dec. 31 or April 1 of the next year.

Two RMDs instead of one: Note, though, that if you push that first RMD to April of the following year, then you'll have to make two required withdrawals in that same year.

The first one by April 1 covers your 70½ birthday requirement. The next one is for that actual calendar year and is due by Dec. 31.

Even though your retirement account might be in an investment vehicle, the withdrawals are taxed as ordinary income, not at the lower capital gains rate. Taking two retirement distributions in one year could bump you into a higher tax bracket.

Take the money: But what if you don't need the account money to cover your day-to-day living expenses? You might be tempted to ignore the IRS withdrawal order and leave the retirement cash untouched.

The penalty for not making an RMD is 50 percent of the amount of money you were supposed to withdraw.

Calculate all your account amounts: You must figure the RMD for each of your retirement accounts, based on their value on Dec. 31 of the previous year. 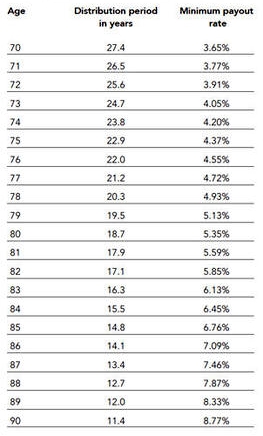 The best way to do this is to list the fair market value of your IRAs as of that date. Then, using the appropriate IRS life expectancy table from IRS Publication 590, figure your RMDs.

Most folks use Table III, Uniform Lifetime Table. That's an excerpt there to the left up to age 90; it actually goes to age 115 and older. And if you've saved enough to enjoy retirement well into your 100s, please give me a call!

If, however, you also have a 401(k) you left with your former employer, you'll have to take that specific RMD amount from that account. You might want to think about finally rolling that plan into an IRA to give you some withdrawal flexibility.

Withdrawal, not spending, required: Remember that 50 percent penalty? If you don't take your RMD in connection with the examples above, you'll owe the IRS $2,737.23 for missing the deadline.

Plus, of course, you owe the income tax due on the money you should have taken out on time.

You can, of course, take out more than the RMD amount. If one year your taxable income will be particularly low, it might be worth doing this.

But you can't apply any excess RMD taken in one year against future RMDs.

You can always put it into a taxable account and let it grow that way to fund your golden years.

Or you can transfer your RMD directly to a qualified charity. This option was made a permanent part of the Internal Revenue Code back in December 2015 as part of the Protecting Americans from Tax Hikes (PATH) Act.