In 1994, Buck Showalter, current Baltimore Orioles (Go Birds!) manager but back then manager of the New York Yankees, had a small role in an episode of Seinfeld. Fans of the show about nothing might remember that this particular episode was, in part, about the Bronx Bombers uniforms. 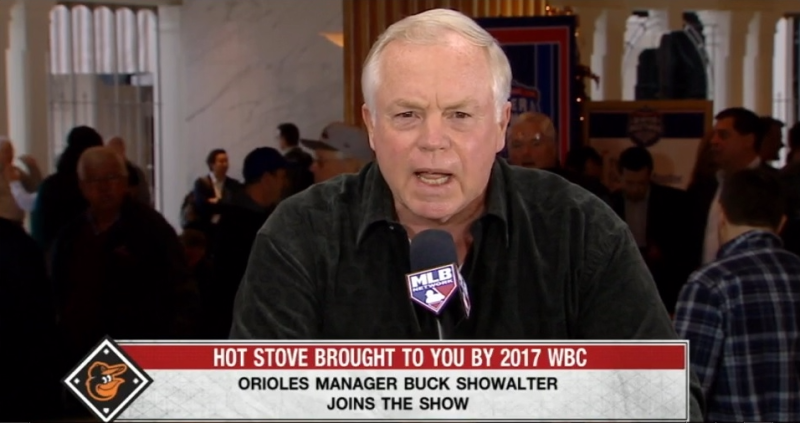 Orioles' manager Buck Showalter talks with MLB Network about his 1994 "Seinfeld" appearance and its tax ramifications. Click image to watch the full clip.

Today on MLB Network's broadcast from Major League Baseball's winter meetings in National Harbor, Maryland, outside of Washington, D.C., the ebullient Showalter talked about his brief TV career and how he's still paying Uncle Sam for his short-lived acting career.

A couple of words, continuing taxes: Showalter is still getting residuals for his one-take, limited dialog ("cotton uniforms") scene. And, says the Os' skipper, "I still get taxed on that."

"When somebody comes up and says I saw you on Seinfeld, I go 'oh jeez,'" said Showalter. "You got to stay on the Actors Guild and you get this little stipend -- I think we cashed a check for 89 cents last week, seriously -- but by the time it's over, every time they show an episode it costs me $19 in taxes."

Showalter also revealed that he wasn't aware at the time that Jerry, George and gang were making fun of Yankees owner George Steinbrenner.

"You notice I didn't do a sequel to that," said Buck. 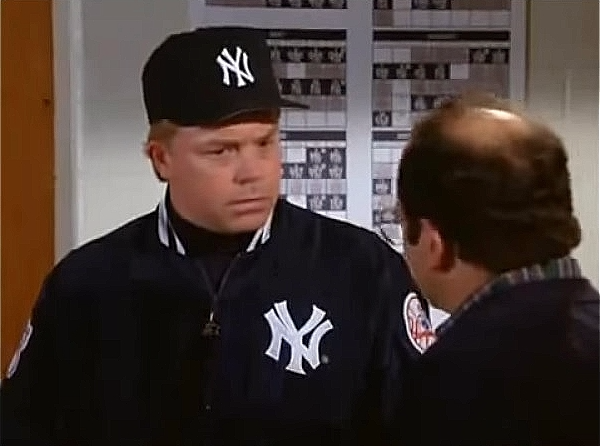 Showalter's reminiscing not only justifies me having the TV on MLB Network, it's also a good segue to what the Internal Revenue Service considers taxable income.

What's taxable: Obviously Uncle Sam's tax collector wants his cut of the usual income suspects, such as wages and salaries from employers, self-employment earnings you bring in as your main source of money or as a side job, investment earnings, gambling and prize winnings and the value of noncash items that you bartered.

And, oh yeah, even illegal earnings are taxable.

The IRS' job is to collect taxes, not enforce other federal laws, so the tax collecting and enforcement office doesn't worry about how you get your money, just that you pay taxes on it. Remember the guy who's still the most notorious tax cheat: Al Capone.

Canceled debt in most cases also is taxable.

So is that state tax refund you got.

And the tax man is definitely interested in some company fringe benefits, like a company car, use of a gym or even a company-paid life insurance policy.

Some older folks face tax on their Social Security benefits.

So do folks who are out of a job; unemployment benefits are taxable, too.

Divorced? If you get alimony from your ex-spouse, you owe tax on that.

And skipping the country won't necessarily protect you from the IRS. The United States has a worldwide tax system, which means that if you're a citizen, regardless of where you live or make your money around the world, U.S. taxes are due.

What's tax-free: There are, however, a few things the IRS leaves alone.

Unfortunately, the circumstances that produce this money are generally situations that we try to avoid or wish we hadn't had to endure.

A new law, for example, excludes certain amounts you get as payment for being wrongfully incarcerated.

While getting laid off could produce a tax bill for your unemployment payments, if you're hurt on the job and get workers' compensation, that money generally is not taxable.

And if you're seriously injured or chronically ill and collecting on long-term care insurance coverage, those amounts usually aren't taxable income.

You can get the full scoop directly from the IRS on what's taxable and what's not in the agency's Publication 525.