I love Christmas. I love it so much that I convinced the hubby to put our tree up the week after Halloween. . 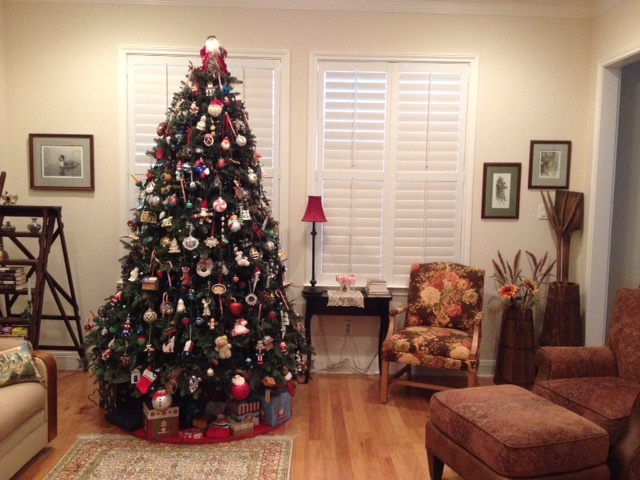 We -- OK the hubby, at my nagging request -- put our Christmas tree up the first week of November this year. The early decorating has made for a less hectic official holiday season.

My main reason is, as I said, I love Christmas. And we have a big artificial tree that takes a while to decorate with all the ornaments we've collected over all our years together. Plus, we have lots of other holiday decorations spread across the house.

It just seems silly to go to all the trouble to take all these festive items out of storage, take a couple of days to put them up and then dismantle everything just about a month later. I'll never, ever understand those folks who buy their trees on Christmas Eve.

So rather than leaving the tree up to Valentine's Day (we actually did that, albeit not intentionally, one year; it was just a crazy time), we started a new Christmas tradition this year and decorated well before Thanksgiving. It comes down right after the Epiphany, Jan. 6, 2017.

Fake's early advantage: Of course, putting up a Christmas tree early is only possible if, like us, you have a fake tree.

I know. You're asking how can I be a true Christmas fan and have a plastic, although lovely, tree? In our defense, we do hang a wreath inside to get the evergreen scent.

The artificial tree allows us to celebrate the season longer than usual. So we're not changing to a real tree any time soon, despite the shade thrown at us by the Christmas Tree Promotion Board.

But the tree growers hope they can convince others to, as their slogan says, keep it real.

Christmas tree "tax" tempest: You might remember this U.S. Department of Agriculture 15 cent fee -- it's technically not a tax -- on fresh-cut Christmas trees that prompted hand wringing and wailing back in 2011 from mostly conservative groups.

The fee/tax protesters saw it as part of the larger so-called war on Christmas and a specific effort to kill a beloved holiday tradition.

The fee was not, as opponents wrongly proclaimed, an Obama Administration anti-Christmas tax effort. It actually was a fee sought by the Christmas tree growers to raise money to promote their industry.

The National Christmas Tree Association's interest in the fee started when Christmas tree production fell from about 37 million to 31 million trees between 1991 and 2007. In addition, the number of tree farms declined and sales of artificial trees grew.

The association looked at the success other agricultural sectors and commodities had with using an assessment designated for research and promotion. Essentially, the live Christmas tree folks wanted a "Got Trees?" to rival the milk industry's "Got Milk?" campaign.

So in 2008, they petitioned USDA to establish the Christmas Tree Promotion, Research and Information Order with its 15-cent per tree fee.

The outcry, however, got enough attention to lead to the tree fee's delay. The continuing complaints kept the fee's collection on hold for years.

Tree fee finally collected: Finally, though, the public opposition died down and the fee is now being collected on fresh tree sales.

The money it's raising is being used by Christmas tree growers to fund a $1.25 million social media campaign -- hashtag #ItsChristmasKeepItReal -- to convince holiday celebrants to buy live rather than artificial trees. 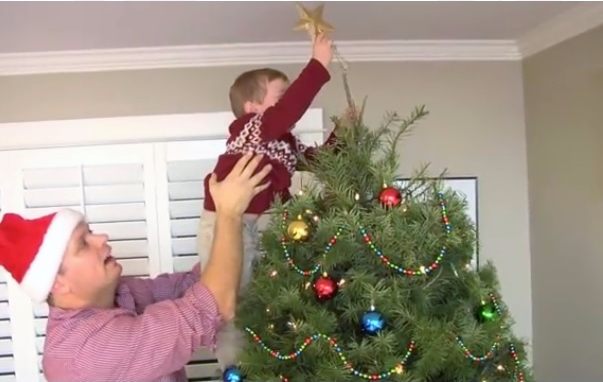 A tree-topping scene from the Christmas Tree Promotion Board's "25 Days of Keeping it Real" video, the production of which was paid for by the Christmas tree fee (not tax). Click image to watch the full story on YouTube of what live Christmas trees would say if they could talk.

Good luck to the tree growers. While I'm committed to my fake tree, I do appreciate the beauty -- and aroma -- of authentic evergreens.

State tree tax break in Mississippi: While there's not a federal Christmas tree tax, most states that collect sales taxes -- that's 45 plus the District of Columbia -- do add that levy to holiday tree purchases.

Some Mississippi tree buyers, however, now get a break when they buy their fir at a tree farm. This Christmas, real trees purchased "directly from the farm and the tree is cut or severed at the time of sale" are now tax-exempt, thanks to a new law that took effect earlier this year.

Do note, Magnolia State tree shoppers, that his tax break applies only to freshly cut trees. The new law expressly states that, "Sales of pre-cut Christmas trees are taxable at the regular retail rate of tax."

Two other states also are looking to lessen the sales tax on freshly cut Christmas trees, but this is a gift that's on next year's legislative Christmas wish list.

Like the Mississippi law, it would make Christmas trees sold by Keystone State tree farms exempt from the state's 6 percent sales tax.

"Christmas trees are one of the few agricultural products not exempt from sales tax," said the aptly-named lawmaker. "This bill would produce some savings for families who buy Christmas trees at a time when most are counting pennies to afford presents to sit under those trees. Removing the trees from the list of taxed items also cuts down on work Christmas tree farms put toward managing the books."

Empire State tree tax holiday: In nearby New York, State Sen. Rich Funke, a Republican whose district encompasses the shores of Lake Ontario, Rochester and parts of the Finger Lakes wine country, also will try again next year to get approval for his proposed sales tax holiday for New York-grown Christmas trees.

Funke's original 2015 Go Green Weekend called for a state-wide, annual tax-free holiday on the sale of fresh trees, wreaths and garlands each year. The bill was amended to exempt fresh cut evergreen trees for the entire months of November and December.

The sales tax break, according to Funke, "would level the playing field for farmers and consumers alike … [and] combined with our support for an innovative new marketing campaign, would help make New York State our nation's capital for fresh Christmas tree shopping."

Until then, enjoy your Christmas tree, real or artificial, wherever you are and whatever tax you paid on it.

And have yourself a very Merry Christmas.