Internal Revenue Service Commissioner John Koskinen got an early Christmas present on Tuesday, Dec. 6, when the House overwhelmingly rejected a last-ditch effort to impeach him. 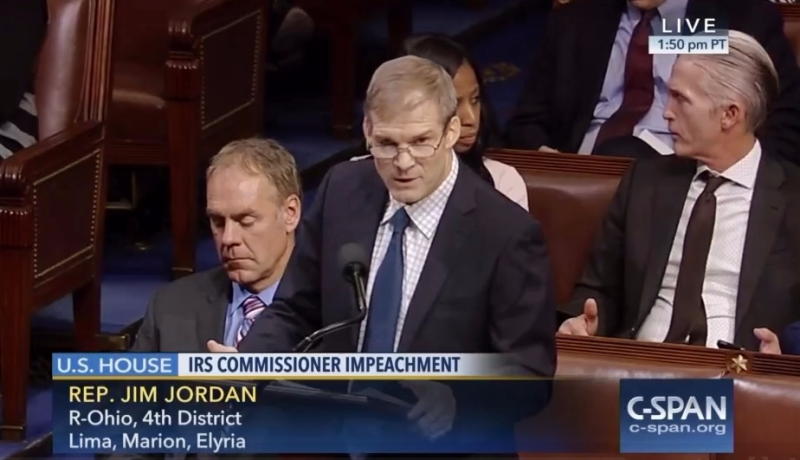 Rep. Jim Jordan, R-Ohio, introduced a resolution Dec. 6 to impeach IRS Commissioner John Koskinen. The effort failed, with House members instead voting to send the matter back to the Judiciary Committee for yet another review. Click image to view full C-SPAN video clip.

A faction of conservative Congressional Republicans have been trying to remove Koskinen from his job for more than a year. The lawmakers, led by the House Freedom Caucus, believe that the IRS commissioner misled House committees looking into the Tea Party targeting scandal.

A key allegation is that Koskinen hampered lawmakers' efforts to recover lost emails sent by former IRS executive Lois Lerner, who was head of the division charged with evaluating and granting requests for 501(c)(4) tax-exempt status.

House Oversight and Government Reform Committee member Rep. Jim Jordan, R-Ohio, cited those charges in his introduction Tuesday, Dec. 6, of a resolution to impeach Koskinen for high crimes and misdemeanors.

Although Koskinen was not commissioner when the Tea Party scandal was uncovered in May 2013, Jordan said in a statement regarding the proposed impeachment that:

"Under his watch, with subpoenas and preservation orders in place, John Koskinen not only allowed 422 back-up tapes containing as many as 24,000 Lois Lerner emails to be destroyed [and] then failed to tell Congress about it in a timely manner.

"John Koskinen has been able to get away with stonewalling Congress, obstructing justice, and breaching the public trust. It's time that Congress held him accountable for his actions."

Koskinen has repeatedly denied the obstruction charges, which have been the subject of multiple House and Senate committee investigations. Additional investigations by the Treasury Inspector General for Tax Administration (TIGTA) and the Department of Justice (DoJ) found no evidence of IRS intent to derail inquiries into the scandal.

Disagreements over Koskinen actions, reactions: The battle over Koskinen's job represented larger political divides on Capitol Hill, both between Republicans and Democrats, but within the Grand Old Party itself.

While conservative GOP House member were united in their desire to see Koskinen removed, others in the party argued for censure. The House Oversight Committee voted, along party lines, for censure in June.

Rep. Elijah E. Cummings, D-Maryland and ranking member of the House Committee on Oversight and Government Reform, cited the DoJ and TIGTA investigations in his rebuttal Tuesday to the latest impeachment resolution.

"Let me repeat that for the record [that] Republican accusations against Commissioner John Koskinen are without merit," said Cummings in a statement. "Let me say this as clearly as I can. In order to vote in favor of this resolution today, you have to believe that the Republican Inspector General of the IRS is essentially lying."

Democrats and more moderate Republicans united Tuesday to defeat Jordan's impeachment measure, which was a revival of the privileged resolution that was first introduced in July by outgoing Reps. John Fleming, R-Louisiana, and Tim Huelskamp, R-Kansas. Fleming gave up his House seat to run for the U.S. Senate, a bid he lost in November. Huelskamp was defeated in an August primary challenge for his House seat.

As a privileged resolution, the House was required to act within two days of the bill's introduction. It didn't take that long.

Shuttled to the committee off ramp: Representatives acted immediately on the impeachment resolution, but not in the way that Jordan and his anti-Koskinen colleagues had hoped. Rather than impeach the commissioner, the House voted 342-72 to send the matter once again to the Judiciary Committee.

The 72 pro-impeachment votes were all cast by Republicans. However, there wasn't widespread support for the move by members of the tax-writing Ways and Means Committee. Only three W&M members -- Texas Reps. Sam Johnson and Kenny Marchant and Kristi Noem of South Dakota -- supported the effort.

The House Judiciary already has held two hearings on the matter, one with and one without Koskinen in attendance. The panel is not expected, however, to get around to a third hearing before the House adjourns, which is planned for Dec. 16.

So Tuesday's vote for further committee action effectively kills the Koskinen impeachment in the 114th Congress.

Will the anti-Koskinen contingent continue their efforts to remove him when the new 115th Congress convenes in 2017? Maybe. But there's likely to be even less support then. Koskinen's four-year term is winding down (it expires next November) and the Republican president-elect will get to name Koskinen's successor.

Lawmakers will likely just let the Koskinen situation run its course as they focus on other matters they want to enact once they have complete GOP control of the legislative and executive branches for at least two years.

And that likelihood no doubt makes for a much merrier 2016 holiday season in the Koskinen household.