Yes, it's December. Only eight days until Christmas. Much of the United States is in the grip of a deadly winter storm. That's why I'm thinking about baseball and coming spring warmth and renewed hope, sports and otherwise.

The other reason I'm thinking about baseball today is taxes. 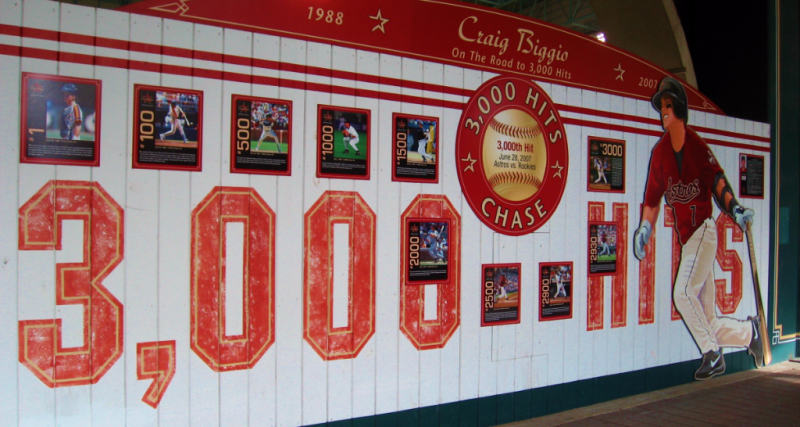 It costs Major League Baseball clubs lots of money to keep star players like Houston Astros Hall-of-Famer Craig Biggio on their teams. But if they spend too much, they'll pay the league's luxury tax. (Photo of Biggio wall in Houston's Minute Maid Park by Kay Bell)

Another MLB [tax] record falls: A record six teams will pay a total of just more than $74 million in Major League Baseball's luxury tax this season, according to information obtained by the Associated Press. Last year, four teams paid the tax, which came to almost $44 million.

That record number of six teams paying the tax barely beat out the substantial dollar increase for this week's By the Numbers honor.

The Los Angeles Dodgers lead the tax list with a $31.8 million assessment. The New York Yankees are second at $27.4 million.

Los Angeles is paying the MLB tax for a fourth consecutive year.

This is the 14th straight year the Yankees will pay the tax. New York team officials hope, as high-dollar player contracts expire, to get below the tax threshold by 2018.

The four other teams facing the MLB levy are in single, albeit big single, digits: Boston Red Sox at $4.5 million; Detroit Tigers at $4 million; San Francisco Giants at $3.4 million; and the World Series champion Chicago Cubs at $2.96 million.

I'm sure the Cubs ownership considers the nearly $3 million it must hand over as money well spent to slake a very old thirst.

Tax incentives, punishments: Obviously, we're not talking here about a true tax issued by a government looking to pay for public services. But strict federal and local taxes often are used to influence public behavior. I'm looking at you, sin taxes.

And sports leagues and franchises employ a variety of real taxes and tax breaks -- publicly funded sporting venues, anyone, particularly in Las Vegas? -- to enhance their bottom lines. So I feel justified in covering the MLB luxury tax.

Plus, I just like baseball and it's my tax blog, so there!

Rather, Major League Baseball's luxury tax is an attempt to slow spending by large-market clubs so that they don't dominate the sport. It was first instituted in 1997 and revised to its current format in 2002.

Proponents of the levy, which is officially known as the Competitive Balance Tax, argue that it and revenue sharing have helped keep small- and middle-market teams literally in the game.

MLB opted for the luxury tax rather salary caps used by other professional sports leagues. This lets teams go ahead and pay for star players as long as they're willing to also pay the tax once their overall payrolls exceed a certain threshold.

As a fan (and a tax geek), I like the MLB tax approach.

Let the team owner who's willing to pay for the best do so. I hate it when my team has to let a player go to stay under a salary cap. I'm looking, angrily still, at you Dallas Cowboys for letting DeMarcus Ware go to Denver where he helped the Broncos win another Super Bowl.

MLB luxury tax rates, increases: The 2016 threshold level for the MLB luxury tax was $189 million. The teams that spent more than that limit face the tax, which also takes into account how many years in row the team has, in MLB's eyes, overspent.

Offenders will be charged the following tax rates, depending on how many years in a row they have been above the threshold:

Any team that drops below the threshold will reset their luxury tax rate, dropping them back down to the first time rate (17.5%) if they should happen to go over the threshold again in the future.

In 2017, the MLB luxury tax threshold increases to $195 million under provisions in the league's new labor contract.

Tax rates will go up next year, too. Additional surtaxes also will be part of the luxury tax computation, raising the potential tax rate to as much as 95 percent for expenditures of more than $235 million.

A 12 percent surtax will be charged on the amount $20 million to $40 million above the threshold. An additional surtax of 42.5 percent will apply to the amount more than $40 million over for first-time offenders and 45 percent for subsequent offenders.

The payroll amount upon which the luxury tax is based is the average annual values of contracts and earned annual bonuses. Regular team payrolls include salaries, earned bonuses and prorated shares of signing bonuses.

Luxury tax addenda: The tax is due by Jan. 21 of the following calendar year. Unlike some individual tax payments that you and I can use to lower our federal Internal Revenue Service bill if we pay early, there's no advantage for the taxed MLB teams to get their money to the league before the actual due date.

Although the luxury tax was created to help equalize competition among the MLB teams, the tax money doesn't go into the league's revenue sharing pool.

And just in case you're wondering, the Milwaukee Brewers had the lowest payroll last year at $65.5 million. The team finished the season with 73 wins and 89 losses.