It's official. We will not see Donald J. Trump's tax returns before we vote on Nov. 8.

During an interview Oct. 30 on NBC's Meet the Press, Indiana Gov. Mike Pence, Trump's running mate, reiterated that Trump will not release his returns until after an audit is completed. 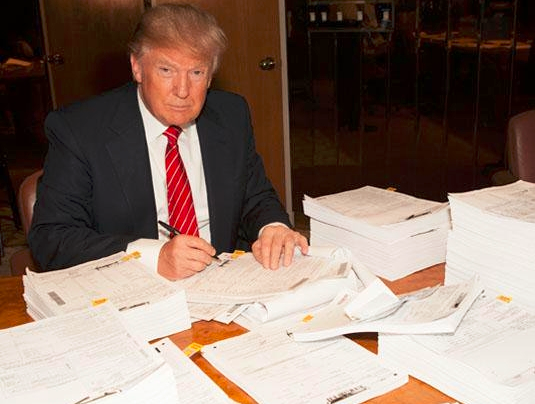 This Twitter image of Donald J. Trump signing his 2014 return on Oct. 15, 2015, is probably the closest we'll get to seeing the Republican presidential candidate's tax filings.

"All right, so not before the election?" host Chuck Todd asked.

Breaking election tradition, again: If the Republican presidential nominee wins next month's election, we might eventually get a glimpse of his 1040s.  Maybe.

But if he loses to Democrat Hillary Clinton, then The Donald's filings definitely will remain his -- and wife Melania's and their accountants' -- secret.

Trump bets on casino losses: While we're waiting for Trump's most current taxes, a new New York Times' report says that the GOP candidate in prior years used a legally dubious method to avoid paying taxes.

A team of Times' reporters writes:

But newly obtained documents show that in the early 1990s, as he scrambled to stave off financial ruin, Mr. Trump avoided reporting hundreds of millions of dollars in taxable income by using a tax avoidance maneuver so legally dubious his own lawyers advised him that the Internal Revenue Service would most likely declare it improper if he were audited.

The new information was found by the newspaper during a search of Trump's casino bankruptcy filings. The documents, notes the article, offer only a partial description of events.

But tax experts who reviewed the newly obtained material at the newspaper's request say that "Trump's tax avoidance maneuver, conjured from ambiguous provisions of highly technical tax court rulings, clearly pushed the edge of the envelope of what tax laws permitted at the time."

Under the rules in effect in 1995, Trump's $916 million loss could have been used to wipe out more than $50 million a year in taxable income for 18 years.

Canceled debt ignored: In the wake of his financial troubles in the early 1990s, the article says that Trump was able to convince his financial backers to forgive hundreds of millions of dollars in debt he could not repay.

Then, according to the Times' analysis, he utilized an "audacious tax-avoidance maneuver gave him a way to simply avoid reporting any of that canceled debt" to the IRS.

In most cases, canceled debt is treated as taxable income. But in Trump's case, he got "something for absolutely nothing," according to John L. Buckley, who served as the chief of staff for Congress’s Joint Committee on Taxation in 1993 and 1994.

Trump's huge casino losses should have been offset by the hundreds of millions of dollars of canceled casino debt, say experts interviewed by the Times.

But by not reporting the canceled casino debt in the first place, Trump preserved his $916 million deduction and used it instead to avoid paying income taxes he might otherwise have owed on books, TV shows or branding deals, according to the article.

"Whatever loophole existed was not 'exploited' here, but stretched beyond any recognition," Steven M. Rosenthal, a senior fellow at the nonpartisan Tax Policy Center who helped draft tax legislation in the early 1990s, told the newspaper.

"They stretched this partnership equity-for-debt exception beyond any recognition," Rosenthal told Tax Analysts in a separate interview after the New York Times article was published. "The partnerships took the creative view that the funding corporation was merely a nominee on behalf of the partnership and so it should be viewed as partnership debt."

Trump camp disagrees: Trump's campaign disagrees with the current assessment by the New York Times and the tax experts it interviewed, contending in a statement to the newspaper that it "suggests either a fundamental misunderstanding or an intentional misreading of the law."

Plus, says the Trump campaign:

"Your thesis is a criticism, not just of Mr. Trump, but of all taxpayers who take the time and spend the money to try to comply with the dizzyingly complex and ambiguous tax laws without paying more tax than they owe. Mr. Trump does not think that taxpayers should file returns that resolve all doubt in favor of the IRS. And any tax experts that you have consulted are engaged in pure speculation. There is no news here."

Trump could, of course, clear things up by releasing his returns, not just from the years under question based on documents obtained by the Times, but also his latest, under audit filings.

That definitely would be news.