After a cordial Oval Office meeting with President Obama, the incoming 45th commander in chief doesn't seem so inclined to pull the plug on the health care program. 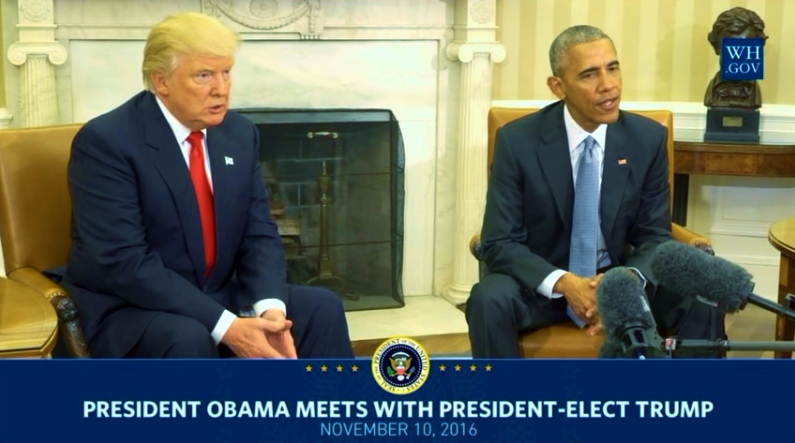 Repeal and replace the Affordable Care Act (ACA) was one of Donald J. Trump's core campaign messages. As soon as the election results seemed clear, opponents of Obamacare, as the health program is popularly known, were exultant.

With a Republican president joining the GOP-controlled House and Senate, Obamacare surely was on life support until Trump is sworn in.

After all, the House has voted to repeal it 60 (or more by some counts) times, the Senate once. The one time earlier this year when both chambers agreed and sent a repeal bill to Obama, he vetoed it.

That wouldn't happen with Trump in office, right?

Not so fast: Hmm, slow your roll Congressional Republicans. Your Party's incoming president seems to have softened somewhat on Obamacare, at least as far as some of its provisions.

In his first interview since the election, the president-elect told the Wall Street Journal that while moving "quickly" on Obama's signature health initiative still was a priority, he would consider leaving certain parts of the ACA in place.

Trump told the newspaper that he favors keeping the provision that prohibits insurers from denying coverage because of patients' existing conditions, as well as the rule that allows parents to keep their young adult children on their policies.

Partial change of heart: So why the apparent change by Trump?

Maybe it was the private meeting with Obama. Perhaps the man who made health care reform his first big policy push was able to convince the man who will succeed him that it's a good idea whoever is in the Oval Office.

Maybe he meant it back in 1999 when, during a TV interview with Larry King, Trump said he was "very liberal when it comes to health care" and that he believes in "universal healthcare." He reiterated that in 2000 in his book "The America We Deserve," in which he wrote (with the help of author Dave Shiflett) that he supported a Canadian-style system, where the government acts as an insurer.

Even as recently as February, during a GOP primary rally in New Hampshire, Trump said he didn't support Obamacare, but added, "We do need health care for all people. What are we gonna do, let people die in the street?"

Or maybe he's already coming to realize that while it's easy to make major policy pronouncements, it's hard to actually implement major policy changes.

Repeal but no replacement yet: Again, look at Congress for examples. While the GOP House has the repeal portion down, it never really got around to the replacement promise. So there's work to be done there.

And it's not going to be easy.

Lots of Trump voters live in rural areas across the nation where, despite political opposition, the ACA has made health care coverage more available via a variety of means. Representatives and Senators can't just tell 20+/- million possible voters, "Sorry, no more insurance for all y'all."

Then there's the insurance industry. For business rather than political reasons, these companies don't want to lose millions of customers.

Also the insurance sector has restructured itself, at least to a degree, around the ACA. Those business changes can't be reversed quickly.

So there's a lot of work left before any repeal, or more realistically, any changes to Obamacare can be made and put into action.

One thing I'm sure the Republicans will change, though, is the name.

Stay the ACA course for now: So what does that mean to you if you're looking at the marketplace for coverage? Go about your health insurance business as planned.

That's what lots of folks did the day after the election when Trump was at 1600 Pennsylvania meeting with Obama.

More than 100,000 people selected plans through HealthCare.gov on Nov. 10, according to the Department of Health and Human Services (HHS). That was the first day that the Obama administration actively began marketing its healthcare signup period this year, which began Nov. 1.

You'll want to make sure you have coverage because until Obamacare is off the books, you'll face some costly tax penalties if you and/or your family members go without insurance.

If you don't have acceptable health insurance, known as minimal essential coverage, in 2016, you'll face an increased shared responsibility payment when you file your taxes next year.

One bit of good news here. If Obamacare's penalty provision is still in effect in 2017, low inflation means that the dollar amount used to calculate the no-coverage penalty remains at the 2016 level of $695.